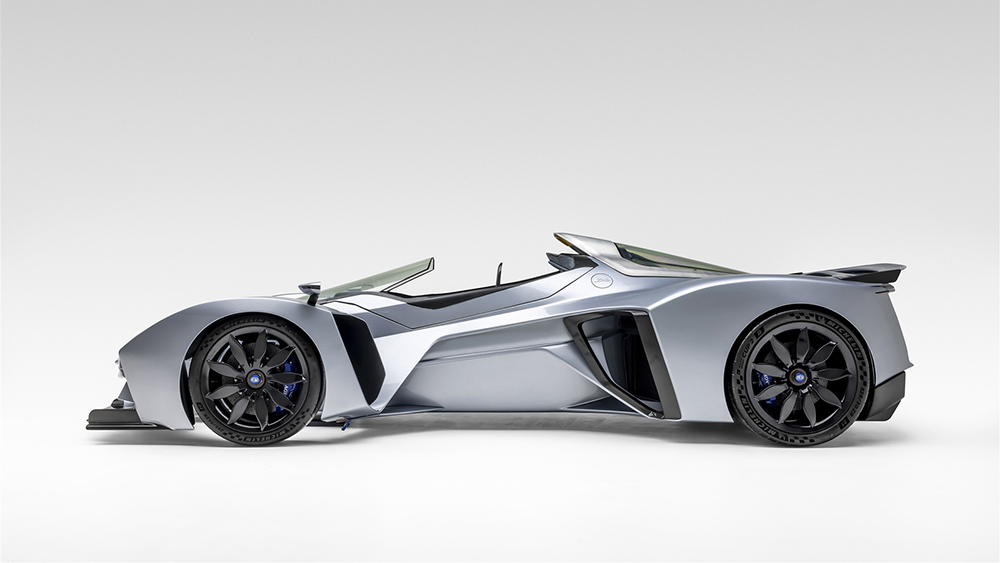 Laurent Tapie is nothing if not ambitious. The self-described “refounder” and CEO of the iconic Delage nameplate once counted exotic cars from Ferrari, Lamborghini, McLaren and the like among his personal stable, and says a contest-winning drive in a Formula 1 car changed his life forever.

Targeting that experience with his hybrid V-12-powered D12, first unveiled to Robb Report, just got a little more on-point thanks to two newly announced open-air configurations: A Speedster model (above), which swaps the fighter jet-style canopy for a raked windshield, and an F1 version which goes even more minimalist with a small wind deflector and Formula 1-style HALO occupant protection shield. Each option is said to add $190,000 to the $2 million price tag, or $260,000 for a combination of both.

Tapie tells Robb Report that the open-air concept arose from a conversation with chief engineer Benoit Bageur, who confirmed that the canopy is not a load-bearing structure and therefore the chassis loses no structural rigidity with the open-air conversion. The only modifications involve where the canopy attaches to the body, and it should take owners 10 minutes or so to ditch the removable lid and convert it to al fresco duty.

The Delage D12 packages mechanical extremes that embrace both analog and digital disciplines: a naturally aspirated, 7.6-liter V-12 developed in-house working in concert with an electric motor. The EV component operates at a relatively mild 48 volts, but combined the two produce 1,100 hp in total. A GT version is said to weigh 3,086 pounds (dry, without fluids), while a Club version produces slightly less power and should tip the scales at 2,888 pounds, dry.

Tapie is insistent on the V-12 configuration, and makes no bones about it. “Unless someone chops my head off or forbids me to do it, I will always put a V-12 in Delage.” Furthermore, he is sticking to his originally audacious goal of breaking the road legal production car record at the Nürburgring Nordschleife—though the pandemic has delayed the development process.

Tapie indicates that a total of no more than 30 D12s are slated worldwide, with nine making it to the US. “The best two days I had since I started this crazy project were in April, when I saw the car going on the track for the first time, and when I received the money of the first firm order. That’s another fantastic feeling.”

With an attempt at a Nürburgring record slated for the second half of 2023, Tapie reckons that European orders will start getting filled first, with the US to follow. If all goes as planned, the new open-air configurations will edge Delage closer to the brand’s target of delivering a Formula 1 experience for the streets.