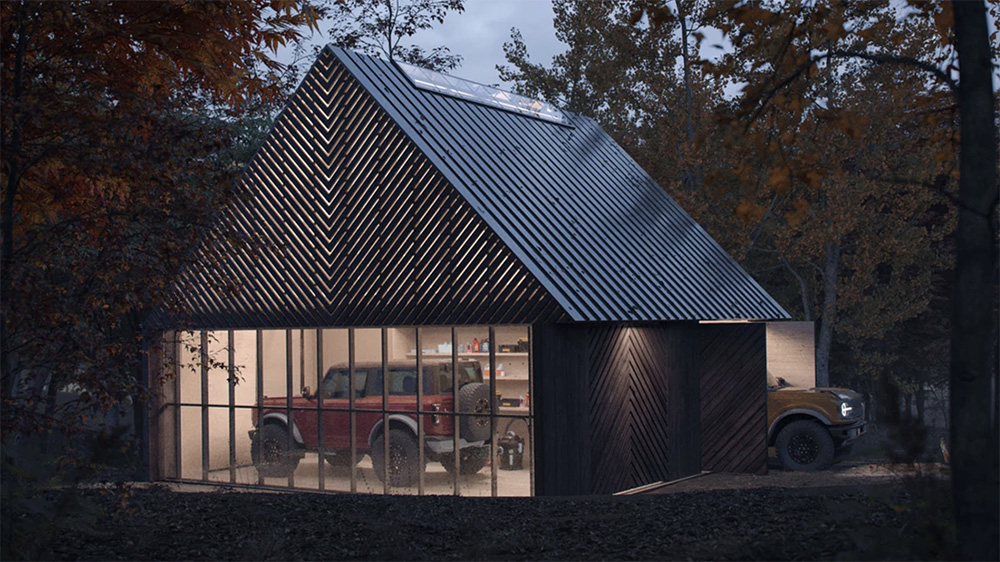 After helping homeowners build cabins for themselves, Den Outdoors wants to help them build homes for their cars.

The New York-based design firm has just unveiled its latest DIY build project, The Garage. The surprisingly chic structure isn’t just big enough for one vehicle, either. There’s room for two or three, whether they’re cars, SUVs or trucks.

The project features an A-frame design similar to the cabins it’s become known for. Despite this, the structure doesn’t look overly rustic. The plans call for floor-to-ceiling windows that allow you to show off your rides while shielding them from the elements. They also give the garage a contemporary feel.

The Garage is available in two configurations. One measures 650 square feet and has room for two cars; the other measures 950 square feet and has room for three. Both structures feature integrated storage space, as well as a workroom that’ll give you space for tinkering under the hood or for other projects. There is also a mini-split for heating and air-conditioning, so you can work in comfort year-round.

As with all of Den Outdoors’s projects, you’re not actually buying The Garage, you’re buying the plans to build it. And you have two options there. The first, called the Starter Package, includes a PDF of the schematics you need to build the garage seen on the company’s website. The second, called the Complete Package, comes with the full blueprints, including 3-D models and AutoCAD files. You can also work with Den Outdoors to customize the design and ensure it meets local codes, which should make it easier to get a building permit.

Inside The Garage  Den Outdoors

The Starter Package, which is really just meant to determine a project’s feasibility, runs $299. The Complete Package, on the other hand, costs $2,395. You’re still going to have to get permits, source materials and hire builders, though. When that’s factored in, Den Outdoors expects the two-car garage will run in the neighborhood of $145,275, while the three-car option will cost around $212,325.

Not bad for a garage you might actually want to spend time in.