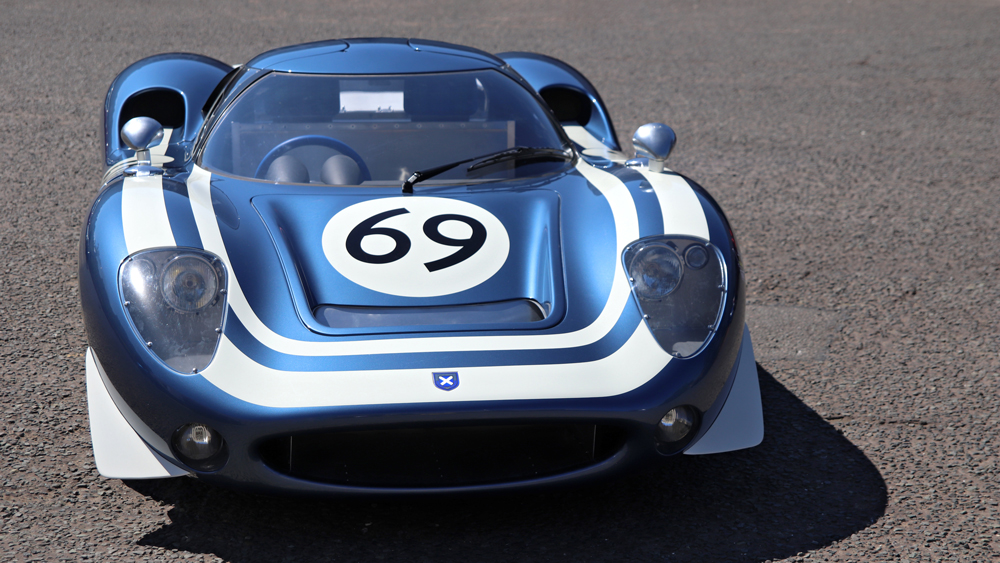 In 1966, gifted aerodynamicist Malcolm Sayer unveiled his Jaguar XJ13 prototype, designed to give the marque another win at Le Mans. Powered by a quad-cam, 5.0-liter V-12, the XJ13 was Jaguar’s first mid-engine car and arguably one of the sexiest automotive designs ever realized. But as racing regulations changed and the company’s leadership lost interest in motorsport, the XJ13 was abandoned without turning a wheel in anger on the storied Circuit de la Sarthe.

Fifty years later, designer Howard Guy and his team at UK-based creative consultancy Design Q decided to answer the question, “What if?”

What if Scottish race team Ecurie Ecosse, which had won Le Mans twice in the 1950s driving Jaguar D-Types, had travelled to Jaguar’s Browns Lane plant in 1967, seeking to revive that victorious partnership? What if it had uncovered the mothballed XJ13 prototype and committed to evolving it with the technology and racing regulations of the day to take on Ford, Ferrari and Porsche in the 1969 Le Mans race? The result may very well have been something akin to Design Q’s muscular, leonine Ecurie Ecosse LM69—finished in the team’s signature white and blue.

Announced back in 2019, the LM69 has no association with Jaguar. It’s an entirely new car, built by an entirely new car company, designed—unlike many contemporary replicas—to be street-legal in the 2020s and styled by those with 1960s passions and aesthetics.

“To take your car on the road and drive coast to coast, that is what it’s about. There’s no restriction,” says Guy, CEO of Design Q, who played with Ecurie Ecosse–liveried toy models of Jaguar’s 1960s Le Mans winners as a boy.

The LM69’s design adheres strictly to the regulations of the time, which means only details and technology which entered motorsport prior to 1969 are featured. Like the XJ13, the LM69 is powered by a ferocious 12-cylinder. The latter has two personalities: one that purrs through residential areas, and a “bonkers” race setting that will have the power plant roaring along highways as only a V-12 can. Given the trend away from conventional combustion power trains towards electric platforms, Guy believes it could be the last new V-12 produced. But, among other engine options, he’s offering a zero-emission choice for the US market.

The chassis, designed and developed by Design Q’s chief engineer James Philpotts, is stronger and more rigid than the XJ13. In addition, the LM69 has a roof, where the XJ13 is a true roadster. Bodywork is a combination of aluminum and fiberglass, although an all-aluminum build is available upon request. A striking rear wing, while unusual in the 1960s, is inspired by the innovation that designer Peter Brock added to the 1965 championship-winning Daytona Cobra.

Bodywork is a combination of aluminum and fiberglass, although an all-aluminum build is available upon request.  Photo: Courtesy of Design Q.

Guy says the passion and soul of 1960s automobiles is partly why buyers continue to seek them out. “There was an element of freedom to the way in which they were designed, an element of courage,” he explains.

The LM69 is priced from roughly $1.18 million for a standard right-hand-drive configuration, although Guy is offering a range of customizations, including left-hand drive. The vehicle’s performance projections include the ability to cover zero to 60 miles per hour in 3.2 seconds, and reach a top speed of 210 mph. (Even today, track speeds at Le Mans top out at around 205 mph.)

The car comes with a right-hand-drive configuration as standard, although left-hand drive is an option.  Photo: Courtesy of Design Q.

A maximum of 25 examples will be produced, in keeping with the 1969 FIA homologation requirements for its class, and to maintain its exclusivity. Each LM69 will be hand-built in the British West Midlands. Although the first show car was unveiled in September and prototypes are currently being tested, initial deliveries are planned for the second half of 2021.