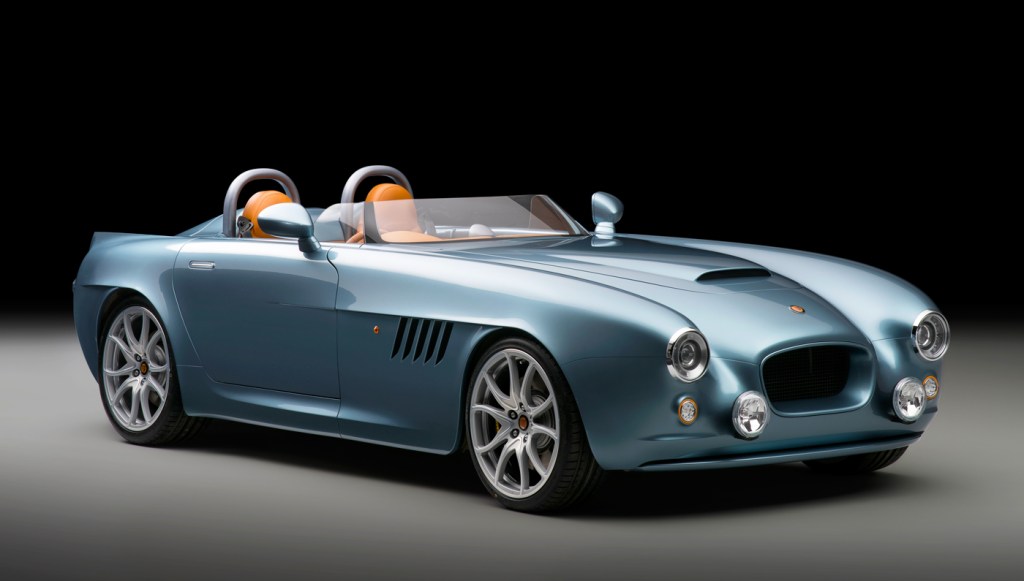 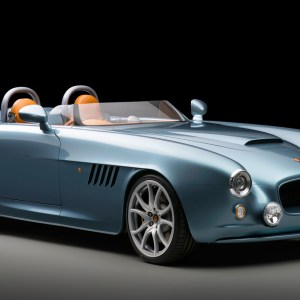 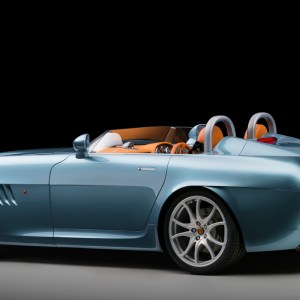 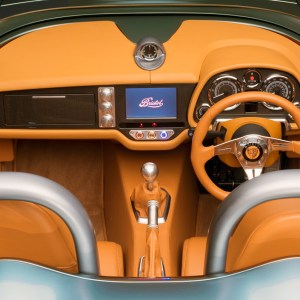 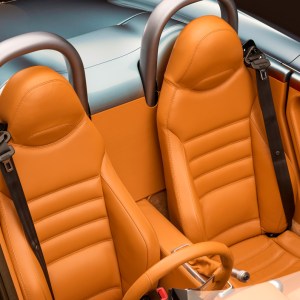 A custom car that’s both an homage to the past and herald of the future, the Bristol Bullet has a visual impact nothing short of ballistic. The model (priced at over $300,000) is the first new release to be fired off from Bristol Cars in over a decade and commemorates the boutique British marque’s 70th anniversary.

Terms like “legacy” and “loyalty” are often bandied about when discussing premier automakers, but few are as well deserved as Bristol, backed by ardent enthusiasts who have managed to keep a majority of its vehicles in active use. RobbReport.com recently spoke with Bristol’s development director Noamaan Siddiqi about Bullet’s trajectory to production and why it’s an important bridge for the brand.

RobbReport.com: Compared to other British automakers, Bristol Cars may not be as well known outside of the United Kingdom. Could you give a brief background on the marque?

Noamaan Siddiqi: Bristol Cars was founded out of the Bristol Aeroplane Company, an extremely significant aircraft manufacturer founded in 1910. It was responsible for the creation of numerous and notable flying machines including the famed Bristol Scout, one of the first combat planes used throughout World War I. Another was the Beaufighter, which had the distinction of being the only airplane to serve in every allied nation’s air force during World War II. By the end of the latter, Bristol Aeroplane Company had almost a quarter-million people in direct and indirect employ and so decided to also make very high-end automobiles, using its large workforce and aerospace expertise as advantage.

The company’s first car was the Bristol 400, created as a licensed-built version of the BMW 328. In 1947, however, Bristol Cars was created as a separate entity and that’s what the Bullet really celebrates—the 70th anniversary of the marque next year.

RR.com: What was your personal path to becoming the development director at Bristol?

NS: I’m actually an electronics engineer by background but the parent company, Frazer-Nash, also falls under the umbrella of my family’s organization, the Kamkorp Group, which specializes in high-tech automotive development. For instance, Frazer-Nash Research is developing high-performance, high-efficiency hybrid powertrains while another subsidiary manufactures state-of-the-art carbon composites. We also have a premier battery cell company in Germany. And so a lot of the cars that your readers may be familiar with, especially from the more famous British manufacturers, actually have our parts on them.

Over the last few years, I’ve come to a few leadership roles in a couple of the companies, one of which being Bristol Cars, which we bought in 2011 to showcase all of these technologies in a single place. That purpose drove the direction we wanted to follow with Bullet.

RR.com: As the first new Bristol model in 10 years, what did you use as inspiration for its design?

NS: One of the first things we did after buying Bristol was visit the factory to view the inventory. It contained hundreds of spare parts for various car models—some of which had only 10 examples built—as well as sheet metal panels by the dozen, glass from 1945, all sorts of stuff. At the back of the factory were a number of vehicles in various states of disrepair and one in particular was under a tattered motor show banner. When we removed the cover there was this fantastic-looking speedster—no roof, just a little aero screen. It was also unique in that it had a Chrysler of Canada hemi engine inside and a manual gearbox, a combination very unusual for Bristol. The marque used to make the 2-liter straight-6 engine before transitioning to the hemi, which was always mated to an automatic gearbox. Here was a car unlike any I had seen, and despite having a VIN plate and identification tag from 1966, it wasn’t in any of the records and it had no license plates and no formal numbers. Nobody (not even those who worked at the factory during that time) could agree on what it was. The only consensus was that it was called the Bullet, after the nickname for Bristol’s early Scout flyer. As this prototype never went into production, we had found the perfect base to build from for our anniversary concept.

RR.com: Tell us about some of the Bullet’s design elements.

NS: Bullet comprises a 100-percent carbon-fiber body structure with a hybrid aluminum composite tub that it’s built around. The really interesting thing about using composite material is that we are able to create shapes and forms that would not be possible out of metal. This lends itself to many unique features. There is an Italian word for Bullet’s front and rear body shell, cofango, which I love. In English, we translate that roughly as “clamshell,” which isn’t nearly as evocative. Of course, with the clamshell style of the past, there were many pieces of metal that had to be welded together and then you had to have someone polish and finish it. We can make the front and rear cofangos out of a single piece due to our carbon-fiber process. In fact, there are parts of the car that could not have been manufactured any other way.

As far as aesthetics and aerodynamics, one of the first features noticed

are the rear fins, which are really a throwback to Bristol’s model 404 and 405, classic cars from the late 1940s and 1950s. However, these fins, formed from the rear cofango, are thoroughly modern and replace the need for a rear spoiler or splitter. Bristol, after all, made one of the first cars ever tested in a wind tunnel and now we incorporate computational fluid dynamics to determine airflow efficiency.

Other unique architectural accents are seen in elements such as the deep rear cowling in front of the deck lid, the thick door arches, and the car’s wide haunches. The very pronounced hood scoop has its own interesting history as it’s taken from the cowling of Bristol’s Beaufighter combat aircraft—another example of how the marque’s heritage is predominant throughout the Bullet’s design DNA.

NS: Let’s start with the dash. The fascia is not only offered in wood or carbon-fiber’s traditional herringbone weave that everyone is used to, we also manufacture our own unique, unidirectional carbon-fiber weave initially developed for an artist. The option offers a more natural finish and adds further refinement due to its handmade exclusivity.

In the center of the dash is an 8-inch touchscreen. In my opinion, so many high-end cars have been crippled by rudimentary or unusable infotainment systems. Ours is a capacitive tablet-like display that can respond to gestures. We have also enabled it to mirror one’s smartphone screen or any Android, iPhone, or iOS device with the assistance of an installed Bristol application. The connection is via Bluetooth but for the audio we use Wi-Fi for the improved high-fidelity experience it provides. We have tried to make the integration as easy as possible. In many other cars, it is so complicated to connect your phone that by the time you do, you’ve gone off the road.

RR.com: The Bullet is reported to accelerate from zero to 62 mph in 3.8 seconds and a top speed of 155 mph. Tell us about the power train.

NS: We start with a 4.8-liter V-8 that begins life as a BMW engine, but is transformed into a Bristol Hercules when finished. A choice of transmissions consists of a 6-speed manual or automatic. As one of our associated organizations is involved in hybrid technology, Bristol models going forward will include proprietary, high-performance electric power trains; however, with this commemorative car we wanted to keep one foot in the past. In fact, during the development process it was known as “Project Pinnacle,” as it will be the pinnacle of the conventionally powered automobile.

RR.com: Are there plans for a larger production run for the Bullet at some point, perhaps incorporating hybrid technology?

NS: No, there will only be 70 examples of the Bullet speedster and they will be manufactured solely with a V-8 engine—these are very special cars. Our first customer delivery will be at the end of January.

RR.com: Speaking of customers, it seems that 70 percent of Bristol’s automobiles are still on the road. How do you explain that?

NS: People love the cars. They cherish and maintain them, and a lot of our customers come back—Jay Leno owns three. And individuals from all over the world ship their cars back to us for servicing on an annual basis. The emotional attachment that we have with our customers is something that I think many other marques have lost. There was a model 400, which was originally purchased in 1946 and remained in the same family for three generations. When, sadly, the last member to own it passed away, his car had been left to us in his will and we feel it is our duty to care for it as guardians of the brand. That kind of personal relationship is what we are looking to build on.

RR.com: After the Bullet, what is next for Bristol?

NS: We will continue to manufacture cars but with a focus on range-extended electric power trains. These will consist of superb high-torque motors and a unique digital differential coupled to a high-performance gasoline generator. That is what the future of Bristol will be. (bristolcars.co.uk)