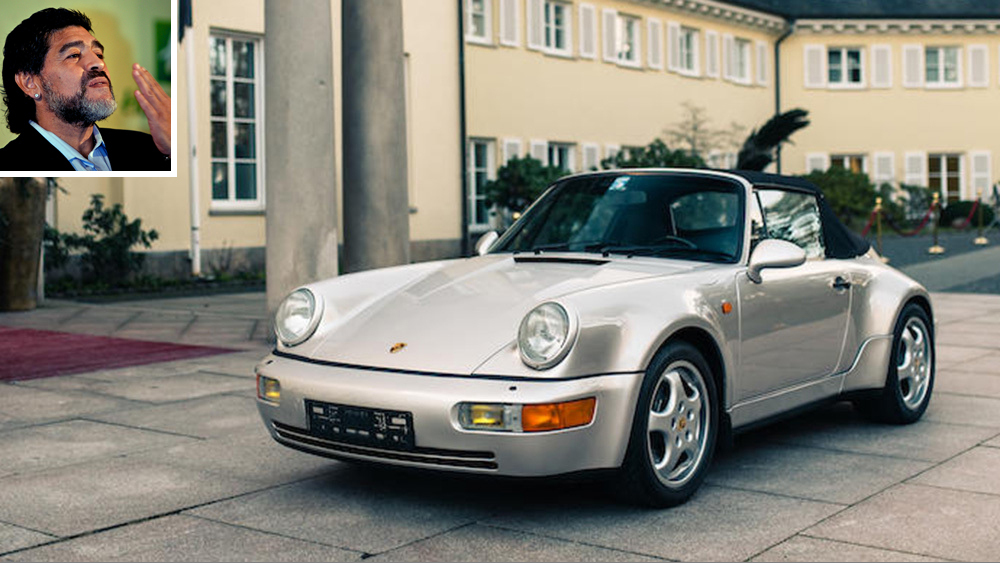 The pitch wasn’t the only place Diego Maradona liked to go fast. The soccer demigod was also a speed freak on the road. And now a Porsche he once loved to drive when he wasn’t busy banging in goals is headed to auction.

Early next month, a 1992 911 Type 962 Carrera 2 Convertible Works Turbo Look (WTL) that belonged to the late soccer great will go up for grabs at Bonham’s Les Grandes Marques du Monde à Paris sales event. But this sports car isn’t just special because it once belonged to “El Diego,” it’s also stands out as one of just 1,200 examples of the cabriolet to ever roll off the production line.

Maradona took possession of the gorgeous drop top in November 1992, during his one and only season for Sevilla, which would also prove to be his last in European soccer. Although only six years removed from leading Argentina to glory at the 1986 World Cup in Mexico City— during which he punched in his infamous “Hand of God” goal against England—the forward’s career had been derailed by his hard-partying lifestyle. Fresh off a 15-month ban for cocaine use, the troubled star was unable to resuscitate his career and his new Porsche was conceivably the biggest highlight of his brief stay with Los Palanganas.

But even if his time in Sevilla was forgettable, Maradona’s convertible was still noteworthy. Finished in elegant silver and with black leather interior, it’s powered by an air-cooled 3.6-liter Carrera 2 engine that could churn out 250 horses and push the car to a top speed of 124 mph, according to the auction house. Maradona enjoyed pushing the car to its limits, too, and was once pulled over by armed police after he was caught driving through the Sevilla city center at 111 mph. The cabriolet was the top-of-the-range 911 available during the early ‘90s. Despite having over 75,000 miles on the odometer, the car has been well maintained and is described as being in “practically original” condition.

Maradona died last November of a heart attack suffered while recovering from brain surgery. He was 60. A week after his death, the Stadio San Paolo in Naples, Italy, where Napoli plays, was renamed the Stadio Diego Armando Maradona. While playing for the Blues from 1984 to 1991, Maradona experienced his best stretch in European soccer, scoring 115 goals and leading the club to its only two league titles in the 1986-87 and 1989-90 seasons.