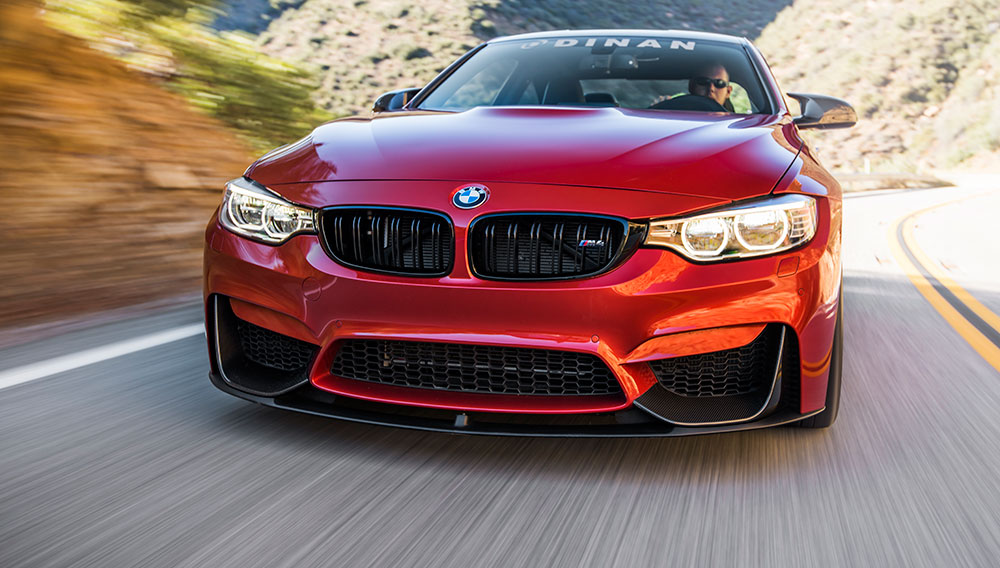 BMW M division builds highly engineered vehicles for enthusiasts who crave more performance than the average bimmer can provide. While the relative exclusivity and cachet of the manufacturer’s in-house tuner proves sufficient for a vast majority of lead-footed drivers, Northern California–based Dinan Engineering unleashes yet another level of output from the Bavarian brand.

Following in the footsteps of the Dinan S3-R BMW 1M Coupe, the latest from Dinan is the S1, a $10,984 package that spices up the BMW M4 (which starts at $64,200) and transforms it into nothing short of a fire-breathing hot rod. Engine modifications—including a carbon-fiber, cold-air intake ($1,999); a DinanTronics Performance Tuner ($2,749); and a Stainless Steel Free Flow Exhaust System ($2,499)—push the M4’s 425 hp output to a considerably lustier 530 hp. Suspension is aided by an Adjustable Coilover Suspension System ($1,599), a sway bar set ($900), and negative camber control arms ($1,099). Among the slew of aesthetic and functional improvements are lightweight wheels and tires ($6,550).

One might expect a 530 hp car with aftermarket tuning to perform brutishly, but the Dinan S1 comports itself with surprising tractability and docile behavior at slow speeds. As with any modern BMW M, there are several drive modes that sharpen throttle response and make the car’s performance more fierce; but it is not until the driver chooses to up the ante that the S1 becomes noticeably intense. Though the twin-turbocharged engine still maintains a modicum of restraint in terms of exhaust note, it spools up angrily with boost and creates acceleration that feels more urgent than the car’s stock 4.1-second figure might suggest. Handling is also taken to the next level with a suspension that is tight and responsive, but not overly abusive or jostling when driven over rough patches.

While the S1 may look slightly more menacing than a stock M4, its true appeal lies in its ability to deliver next-level performance in a package that is both stealthy and strong. (dinancars.com)