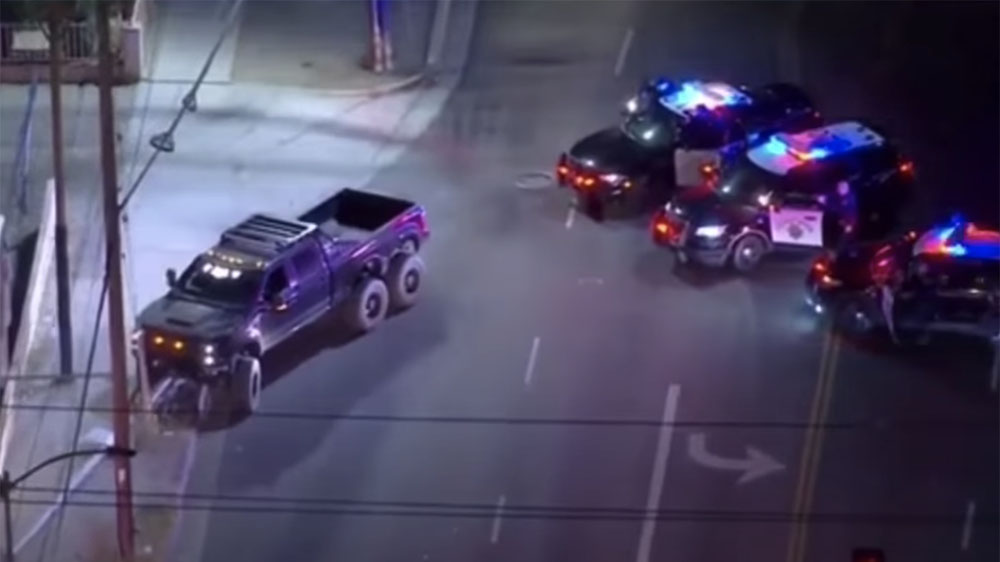 As one of the world’s most popular DJs, Marshmello is used to being the center of attention for thousands of adoring EDM fans. But earlier this week, it was his massive truck that took top billing during a police chase through the streets of Los Angeles.

On Wednesday night, a giant, custom Ford Super Duty F-550 six-wheeler belonging to the DJ was stolen while being while being serviced at a dealership in Van Nuys, reports the Los Angeles Times. Despite its hulking size, the thief managed to evade authorities for hours, before ending up in a police pursuit which ended with the vehicle crashing into a pole.

The truck, a Diesel Brothers-designed SMCO 6×6, was sitting at a dealership waiting to be serviced when a man on a bicycle rode up, threw his bike in the back and drove off, according to the paper. The truck wouldn’t be seen again until hours later when it was spotted driving recklessly near Malibu, at which point a pursuit began with both police and sheriff officers chasing after the thief.

Over the next 30 minutes, the chase crossed over from the 101 Freeway to the streets of the San Fernando Valley, avoiding several attempts to stop it, including a failed PIT move. The chase finally ended shortly after 10 pm, when the driver crashed into a telephone pole after losing control of the vehicle while exiting a Taco Bell parking lot. At that point, the man peacefully surrendered to authorities and was taken into custody. He has since been booked on suspicion of grand theft auto and felony evading police.

A rep for Marshmello did not immediately respond to a request for comment.

Although it looks just like a Hennessey VelociRaptor 6×6, Dave Sparks of the Diesel Brother later identified the truck as an SMCO 6×6 that the team built for the DJ last year. The Drive reports that the Super Duty is the exact model that the reality star and partner Diesel Dave unveiled at last year’s SEMA show. While we don’t know the exact technical specs of the vehicle, the one-of-a-kind monster truck carries a price tag of $500,000.