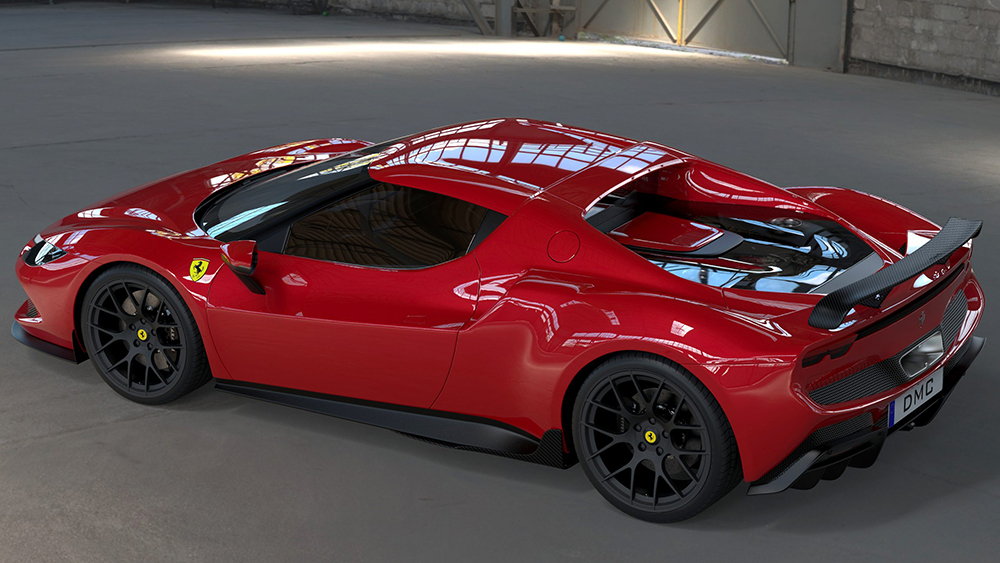 The Ferrari 296GTB hasn’t even rolled out yet, but one German tuner is already touting a tuning package to give the hotly anticipated hybrid sports car even more power.

DMC, which offers an array of mechanical and cosmetic upgrades for all manner of luxury cars, has just unveiled a kit that promises to give the new Prancing Horse a menacing 900 horses (888 bhp). Yes, you read that right.

Of course, Ferrari’s first badged V-6 is by no means short on grunt. Under the hood, it will be fitted with a turbocharged 3.0-liter internal combustion six-cylinder that can generate 654 hp, along with a Formula 1-inspired electric motor that delivers an additional 164 horses. Combined, the setup, which is mated to an eight-speed DCT gearbox, can churn out an impressive 818 horses. The marque says the formidable ride will be able to rocket from zero to 62 mph in just 2.9 seconds and hit a blistering 205 mph at full tilt.

The souped-up Prancing Horse is reportedly good for 900 hp.  DMC

DMC still saw room for improvement, though. While the electric motor will remain as is, the tuner will treat the V-6 to a new ECU and pump up the turbo boost to give the car an extra 82 horses. The Germans expect that the souped-up four-wheeler will be able to sprint to 62 mph in 2.8 seconds. (Hey, that tenth of a second will matter to some.) There is no estimated top speed, but the needle should creep a little further up the dial.

DMC is offering a few more carbon parts, too. To recap, the original coupé features an aerodynamic nose that flows smoothly into its large side intakes, along with prominent rear fenders and an active spoiler that increases downforce by up to 794 pounds at 155 mph. DMC’s Aero Kit components include a large rear wing spoiler and a set of side skirts. The parts are made from dry carbon fiber, which is available in different weaves to match your existing spec. DMC says the new additions will give the car more aggression.