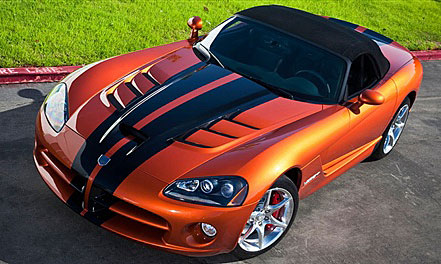 Order the Dodge Viper SRT10 as a convertible and some of its machismo (and rigidity) is lost with the top, but it is a great car for cruising the coastline. After 18 years and more than 25,000 cars on the road, the Dodge Viper will officially be extinct at the end of June 2010. Though 2010 will be the final model year for this ultra-potent muscle car, it is not going away quietly. Last year, the Dodge Viper ACR set the Nürburgring production-car lap record with a time of 7 minutes and 22 seconds around the 13-mile track. Even more recently, the car recaptured the lap record around the 2.2-mile track circuit at Laguna Seca in Monterey, California, with an official time of 1 minute and 33 seconds. In addition to this recent round of racing success, Dodge plans to unveil several new limited-edition versions of the Viper SRT10 for its final year: Production of all coupe and convertible Viper SRT10 models will be limited to 500 units in 2010. Pick one up before it’s too late.

Pros: The final 500 Vipers are sure to be collectors’ items.