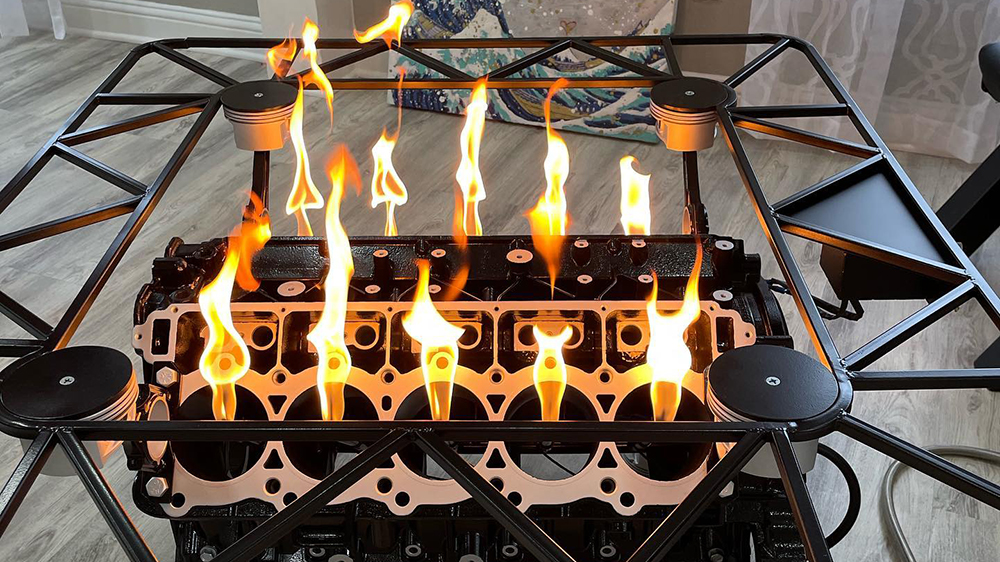 The Dodge Viper‘s V-10 engine would be a terrible thing to let go to waste, so John Cobb turned it into something else entirely.

The Automotive artist, who’s also the creative mind behind industrial design shop Alaris Invent, recently found himself in possession of the mill from a 2002 Viper, according to Motor1.com. Rather than just use it for another car, he decided to use it for something completely different—a fire pit that can double as a coffee table.

The artist used the Viper’s massive 10-cylinder mill, which has been given a deep scrub so that it looks practically brand new, as the pit’s base. He then attached pistons and connecting rods to the engine block for use as legs and support. In images of the table Cobb posted to Facebook you’ll notice that there’s no surface, but that’s likely just to show off its fire pit capabilities. We imagine a simple glass top could be used to turn it into a fully functional coffee table.

While the table-pit’s design is likely to stop you in your tracks, even more jaw-dropping are its fire-breathing capabilities. Cobb equipped each cylinder of the engine with its owner burner and igniter, so that a flame spits out of each. He also rigged up a pretty cool ignition system to turn the fire pit on. You simply turn a key installed in the engine block to turn on the igniters and feed each of them gas from an attached tank by stepping on the pedal from an actual Viper. It’s really not much different from getting the actual supercar’s engine roaring. Of course, it should go without saying that you’ll only want to use the fire pit function outside. If you’re eyeing this as a coffee table, though, its suitable for indoor use.

“Honestly the biggest challenge out of so many would probably be the electrical and wiring,” Cobb wrote in a message to Robb Report. “It seems simple to make 10 individual igniters start at once from one automotive key turn. I gave up many times but finally figured it out and it was worth it.”

Cobb has built engine coffee tables and fire pits for customers in the past, but he spent five months hand-crafting the dual-use Viper model for himself. He’s willing to build one for you, too—for a cool $11,500. If you’re interested, you can reach out to him through his website. It will no doubt be, well, fire.