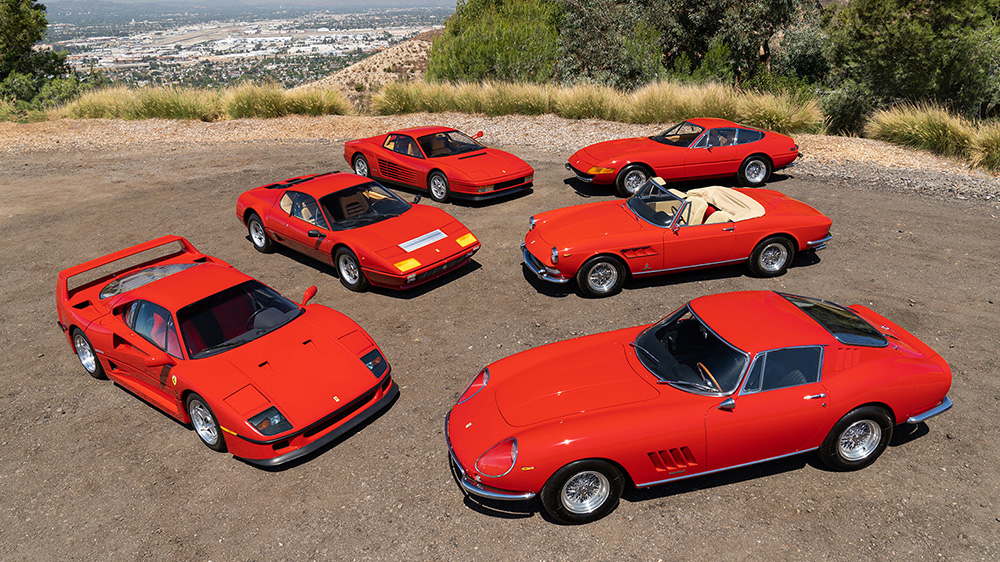 The late Southern Californian collector Donald L. Weber amassed an extraordinary fleet of Ferraris throughout his lifetime. Now, the red rarities are being offered up to a new set of discerning collectors.

More than 20 of Weber’s most prized rides will go under the gavel at Gooding & Company’s upcoming Pebble Beach auction, taking place August 13 and 14.

The sizable Prancing Horse stable runs the gamut from classic postwar sports cars to high-octane racers. The pick of the ponies, though, is a pristine 1967 Ferrari 275 GTB/4. The highly sought-after four-wheeler was purchased new from the marque’s Maranello factory and has been carefully sheltered for half a century. The vintage beauty, which was comprehensively restored by Junior’s House of Color and Tony Nancy, previously headlined the 1997 Pebble Beach Concours d’Elegance and is a bona fide showstopper. It’s expected to fetch between $2.75 million and $3.5 million.

Another highlight from the collection is a coveted 1992 Ferrari F40 with a mere 2,500 miles on the ticker. The F40 is one of just 22 that rolled off the line during the final year of production. It also represents one of the last of the 213 models that were built to US specification. A true automotive time capsule, the supercar has never before switched hands and is presented in immaculate condition, along with matching luggage and a report by Ferrari historian Marcel Massini. It’s estimated to reach between $1.7 million and $2.2 million.

In addition to Weber’s impressive haul, the Gooding & Company auction will also feature classic cars sourced from the Stephen P. Dean Collection and the Mullin Automotive Museum. You can expect stellar luxury cars from Porsche, Bugatti and more.

“We know just how much passion, enthusiasm, and care go into maintaining these legendary collections, and we are delighted to present these pieces of automotive history at auction,” president and founder David Gooding said in a statement.

Might be time to clear some space in your stable.