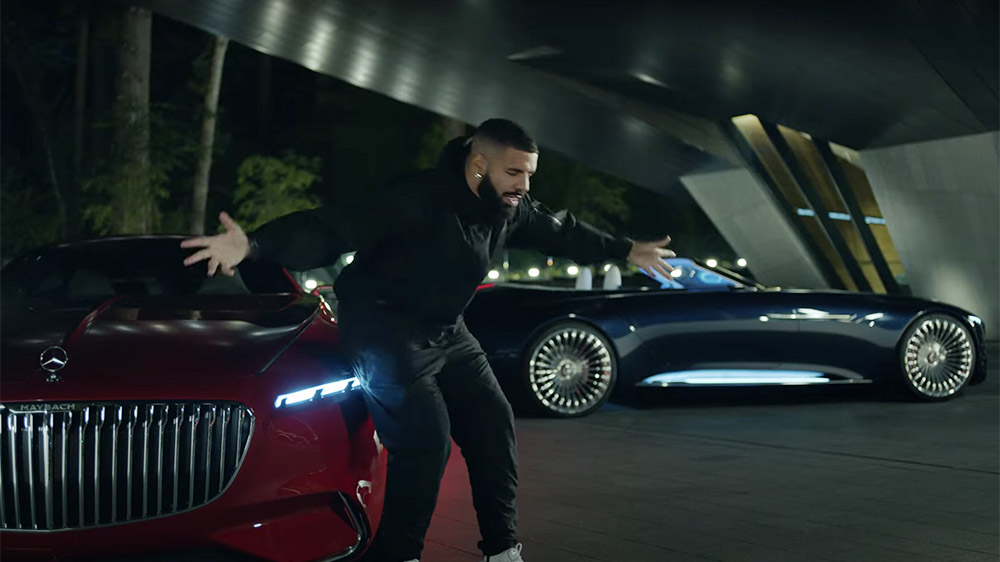 Since his rap career began in earnest, Drake has never shied away from showing off his opulent lifestyle. The video for his newest single, “Laugh Now Cry Later,” is no exception. The Canadian rapper can be seen shooting hoops with Kevin Durant, throwing the ball around with Odell Beckham Jr. and driving one of the most insane Mercedes-Maybachs you’ll ever see.

While Champagne Pappy’s taste in the finer things can sometimes raise eyebrows, the new video, which was released early Friday morning, shows that he knows a thing or two about cars. He’s not driving just any old Maybach; he in a the one-of-a-kind Vision Mercedes-Maybach 6 Cabriolet concept.

The dazzling convertible made its debut at the Pebble Beach Concours d’Elegance back in 2017. Stretching 20-feet, the sleek, open-top vehicle features an elegant Art Deco-inspired body, finished in Nautical Blue Metallic with elegant chrome accents. Just as head-turning is the spaceship-like interior, which features white nappa leather seats, ice blue accent lighting and a yacht-inspired floor. And while the car’s design is noteworthy enough, the 750 hp, fully electric drivetrain is nothing to sleep on either.

Like most concepts, the Vision Mercedes-Maybach 6 Cabriolet is more show car than production vehicle, but Drake does spend some time behind the wheel in the perfectly corny video. At the very beginning of the clip, the former Degrassi star can be seen driving up to the Nike World Headquarters in Beaverton, Oregon, with a date who he then takes on a private shopping spree. He also dances around the Cabriolet and its older sibling—a ruby red Vision Mercedes-Maybach 6 Coupe—before the video’s end.

A representative for Mercedes-Maybach informed Robb Report that the two concept vehicles belong to the automaker and were provided to Drake for use in filming the “Laugh Now Cry Later” video. While he may not own them, we have a feeling the rapper will be able to afford the cars should Maybach ever feel like parting ways with them.