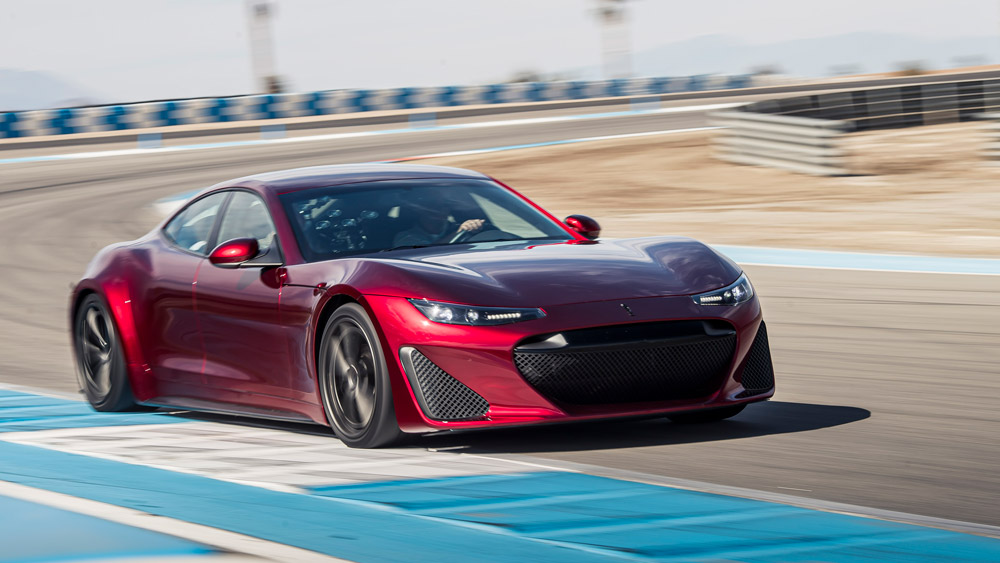 “It’s just gliding along on a bed of torque with perfect balance, and Valentino is smiling his face off.” So says Shiv Sikand from the backseat of the Drako GTE as Valentino Balboni swirls us through the banked carousel and into the esses of the short, twisty North Palm Circuit at the beautiful and posh Thermal Club racing complex in Thermal, Calif.

Balboni, the revered former Automobili Lamborghini test driver, is finding the edge of tire adhesion with the 2020 Drako GTE—the first electric vehicle the 70-year-old ace has driven on a track.

Sikand is executive vice president of Drako Motors, which takes its name from Sikand’s partner, the tech entrepreneur Dean Drako. Introduced last August at the Quail, a Motorsports Gathering, this swoopy four-door, four-seat grand tourer is based on a Fisker Karma chassis with styling adapted by the Granstudio design house in Turin, Italy.

The Drako GTE on one of the Thermal Club’s circuits.  Photo: Courtesy of Drako Motors.

As a startup company that’s been 10 years in the making, Drako is launching the $1.25 million GTE into bespoke production at its assembly atelier in San Jose, Calif., in hopes of becoming the first manufacturer to ship a quad-motor EV. Just 25 examples will be fussed over and white-gloved out the door during an estimated two-year build-out.

With an electric motor at each wheel, cutting-edge torque management and a snout-full of inverters and radiators to engage and sooth the outrageous 90-kilowatt-hour battery, the car—abetted by an ongoing digital colloquy—produces knee-buckling performance. The off-the-charts numbers defy belief: 1,200 hp, 6,490 ft lbs of torque and a top speed of 206 mph.

The GTE’s heaviness is compensated for by the chassis’ torque-vectoring capability. Folks, this is no Studebaker Avanti returning in another tedious iteration. The Karma-ish shape is familiar, but crazy stuff goes beneath the carbon-fiber panels. Sikand and Drako, graduates of the Universities of Manchester and Michigan, respectively, pursued a novel plan and developed the battery—which is embedded in the floor and stuffed into the central tunnel—for oomph.

The Drako GTE has an electric motor at each wheel and cutting-edge torque management.  Photo: Courtesy of Drako Motors.

Chassis development owes to the judiciousness of racer and engineer Andy Pilgrim, who used Thunderhill Raceway Park and WeatherTech Raceway Laguna Seca to work out the stride of the Öhlins suspension.

For those standing in the paddock, the GTE goes by with a blathering whoosh from the 20-inch tires. (For street use, 21-inchers are fitted.) Inside the car, we noted well-suppressed gear whine and, from a poor seal around the passenger-side glass, some wind noise. Hand-stitched hide-and-Alcantara upholstery, a leather-wrapped dash and a steering wheel with carbon-fiber inserts supplied conventional luxe, of which the purchaser can specify further details adding, of course, to the base price.

From the shotgun seat, I watched Balboni set up for a turn and then modulate the throttle through the apex. The balance was perceptibly adjusted by the wheel motors in response to physical forces, and the long chassis rotated ever so predictably and without appreciable yawing. Howling from underfoot let us know we were on the limit.

Having shaken down so many new Lamborghinis before his 2008 retirement, Balboni knows the V-12 engine song as well as Mozart knew the range of an orchestra. As we later sat together in the paddock, the native of Casumaro, just 20 miles from the Lamborghini factory in Sant’Agata Bologonese, Italy, heard of my fondness for blatting exhausts and acknowledges that he feels the pain. Yet he is “proud and honored” to bring his experience to Drako Motors. “I still respect a lot the tradition,” he says. “But this makes it easier to go to the limit of the car.”

Only 25 examples are planned for the $1.25 million grand tourer.  Photo: Courtesy of Drako Motors.

Obliquely, because of the Turin design, the GTE bolsters his faith in Italian industry. He sees it being in position to help smooth the transition between petrol and electrons. Quoting an old proverb, the master says, “If you want the sun to come out, you have to open the window.” On this brilliant day at the Thermal Club, the GTE’s performance window was opened for the world to see.