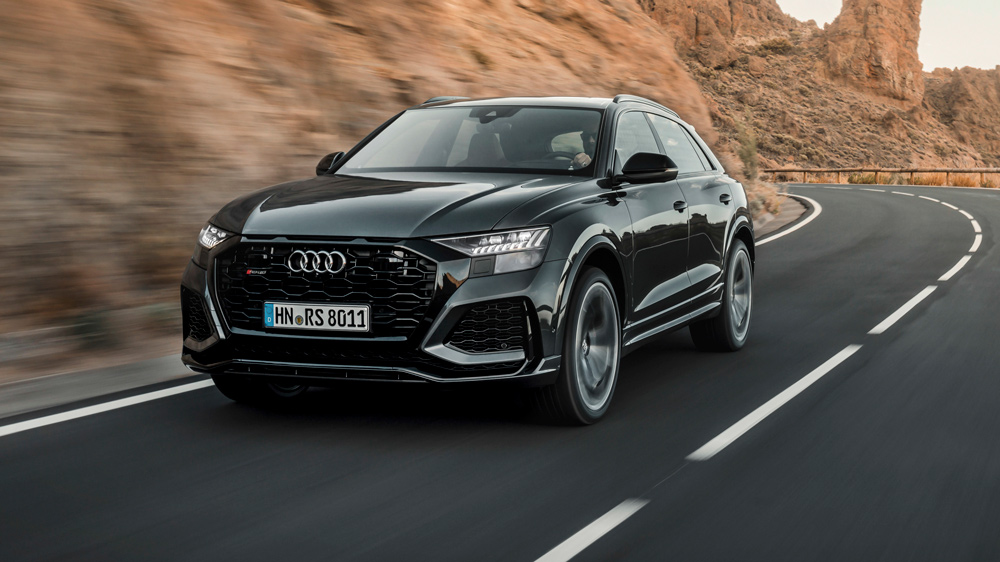 You can hear the Audi RS Q8 before you see it. In another life, before the world shut down, the sound of a 591 hp V-8 bounced off terracotta walls and towering amorphous rocks on a steep narrow road ascending toward Mount Teide, a dormant volcano rising more than 12,000 feet above the Atlantic Ocean on Tenerife, the largest of the Canary Islands.

We were riding shotgun in a race-spec version of Audi’s fastest crossover, which shortly after its debut broke the record for the fastest production SUV on Germany’s famed Nürburgring Nordschleife (in seven minutes and 42.2 seconds, in case you’re wondering). The man behind the wheel was Frank Stippler, the racing driver who set that record and who helped Audi engineers fine-tune the RS Q8 into a high-performance machine that rivals the BMW X6 M and the Mercedes-AMG GLE 63 Coupe.

The RS Q8 uses a mild hybrid system to achieve 590 ft lbs of torque and a zero-to-60 mph time of 3.7 seconds. Notably, it shares its architecture with the (much more expensive) Lamborghini Urus and Bentley Bentayga, but is tuned and set up to be distinctly Audi, thanks in part to the hard work of Audi Sport engineers.

“I’m really pleased that we helped to create a car that has such a wide range, from really comfortable to really sporty,” Stippler says as we wind our way through a landscape that resembles the surface of Mars. The exhaust note rings deep and satisfying—but not obnoxiously so—when he puts his foot into the gas pedal. “I’m especially happy with the steering feedback, the precision of the turn-in—close to a proper sports car.”

As Stippler talks, we swing right, then left then right again, firmly fastened into our five-point racing harnesses. Despite the car’s size, we stay planted and on-line with the help of rear-wheel steering and an electronic limited-slip differential. Nothing escapes Stippler’s piercing green eyes. He reads the road like a German Sherlock Holmes, steering around sharp corners with ease, never fazed by tiny oncoming Seats and Citroëns meandering across the center line as we make our way into the clouds. Forget the Urus and the Bentayga, I thought. This was the car to get. It had power, style and class. But unlike its cousins, the RS Q8 wasn’t trying too hard to show it.

Memories of the joyride with “Stippi” come flooding back as I drive an RS Q8 (without a roll cage and with a proper back seat) around Los Angeles. We may not be pulling g’s around corners, but we certainly turn heads in the sleek crossover, which seems to be admired as much for its relative rarity as its capable performance. At a curbside pickup spot in Santa Monica, where a parade of Lambos, Bentleys, and Mercedes G Wagens stream through each day, the attendant beams as we approach. “This is the first RS Q8 I’ve seen in person,” he gushes, asking permission to run his hands across the quilted leather in the back seats as he drops our package inside. Even the guy who sees it all is impressed.

Compared with the standard Q8 and slightly sportier SQ8, the RS employs more aggressive—but still elegant—design elements that hint at the power beneath. These include an RS-specific front bumper, a honeycomb pattern on the mesh grille insert and darkened matrix LED headlights. A roof spoiler adds more downforce, while the rear is fitted with bigger tailpipes and a diffuser also exclusive to the RS.

The vehicle itself is slightly wider and wears 23-inch wheels – the largest available on any Audi. In greyscale tones or in the Navarra Blue metallic on our test car, the RS Q8 stays fairly under the radar. But for those who prefer more attention-seeking hues, Dragon Orange or Java Green (the latter is only available in the US) will not disappoint.

At the front is an RS-specific bumper, a honeycomb pattern on the mesh grille insert and darkened matrix LED headlights.  Photo: Courtesy of Audi AG.

While not as spacious as the more upright Q7, the RS Q8 offers all the versatility and creature comforts of any fastback-style crossover, and will easily accommodate a couple of kids or a car full of luggage. We’re a fan of Audi’s “virtual cockpit” interface, with a large integrated center screen and digital driver’s display. Apple CarPlay and Android Auto make smartphone integration easy, and a premium Bang & Olufsen audio system make it all sound good.

As with all Audi RS models, different drive modes adjust the steering feel, suspension, exhaust note and throttle, and a memory function allows the driver to customize his or her favorites. Adaptive air suspension and four-wheel steering come standard, which handle whatever bumps and curves we might encounter. While equipped with a plethora of electronic safety features, the vehicle still makes it possible to reduce or even disable electronic stability control, but we advise against it unless you’re Frank Stippler, or at least on a proper racetrack. It’s still a 5,500-pound SUV, after all, and even the best engineering can’t defy physics, as a well-known professional golfer—speeding in a different SUV—recently learned.

By the numbers, the RS Q8 isn’t as powerful as the Lamborghini Urus, nor as opulent as the Bentayga, but with a starting price of $114,500, the Audi is a comparable bargain. A company spokesperson tells us that exclusive ordering is not yet open for 2022 but mentions, “if you want one, it will be built. It just may take some time as RS Q8s are a small percentage of Q8 production.”

If you can’t wait, there are still some new 2021 RS Q8s available at dealerships, although our Audi contact counted only 54 examples left in the US at the moment. If you snap one up now and put the money you’ve saved toward the new Audi e-Tron GT, you’ll have a sleek electric commuter to go alongside your high-powered family hauler—not to mention a garage that is anything but cliché.