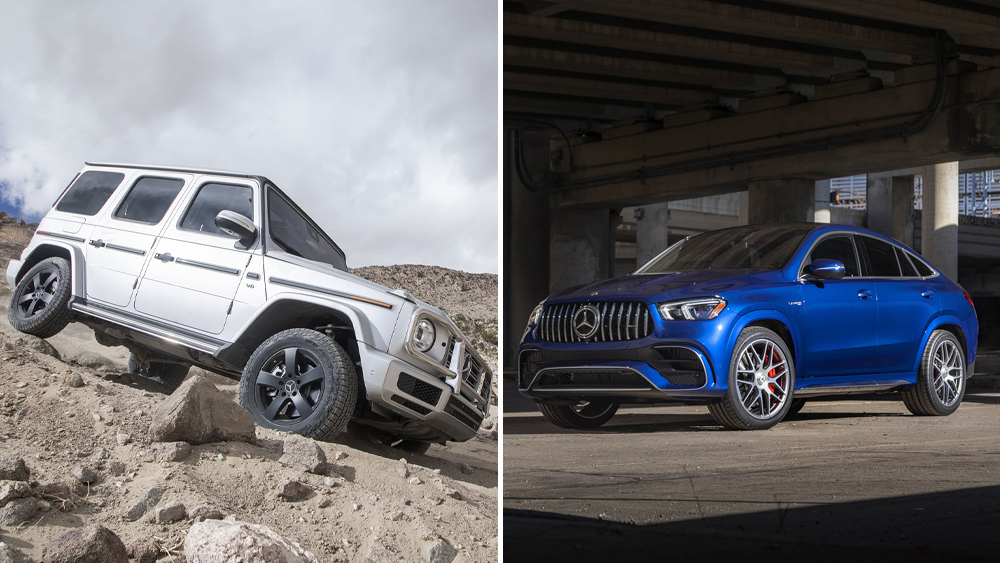 If any automaker could be compared to ice cream brand Baskin Robbins, it would be Mercedes-Benz. Like the former’s advertised offering of 31 flavors—one for each day of the month—Germany’s biggest car company offers 15 luxury model lines in North America, comprised of innumerable variants within each. Thus, there seems be a model for every type of customer.

Nowhere is the hackneyed expression “horses for courses” more apposite than when looking at Benz’s big SUVs. In the beginning, sport utility vehicles were originally bred as beasts of burden with real jobs to do but, for decades now, the SUVs from the Silver Star have become fashion accessories, most never dipping a shoe into anything dirtier than asphalt.

So, when Mercedes-Benz offered a test of two of its top models—the G550 and the AMG GLE 63 S Coupe—it seemed the perfect opportunity to compare, contrast and, well, covet. Parked side by side, the two SUVs are as different from one another as chocolate and vanilla. One is a box, plain and simple; the other is a rounded four-door fastback, in a very well-fed sea lion sort of a way.

Mercedes’ G-Series needs little introduction. What began as a military vehicle circa 1979 has become the darling of the “live to shop, shop to live” set, an utter waste of what is the most capable showroom-stock all-terrain vehicle on the planet. The Mercedes-Benz will give any Range Rover, Jeep or Toyota a run for its off-road money, but at a rather dear price.

Completely redesigned three years ago, the W463 (its internal code) is essentially the same as its earlier predecessors from a distance of 20 feet, though larger by millimeters in length and width. Importantly, the latest G-Wagons are not the hair-shirt ride they once were, featuring a new independent front suspension and nine-speed automatic transmission. Driving modes include Comfort, Sport, Eco, Individual, and G (optimizing off-road capability), along with 100 percent differential locks that improve comfort and agility on any surface.

The G550 is one of the most capable showroom-stock all-terrain vehicles available.  Photo: Courtesy of Mercedes-Benz AG.

The G550 has a more formidable brother—the G63—which we’ll drive later this year. But fundamentally, the two are hewn from the same Austrian granite and, practically speaking, there is no reason that the G550 shouldn’t suffice in any real-world application. Although not developed to win stoplight derbies, the G550 is adequately endowed with a 4.0-liter, twin-turbo V-8 engine that makes 416 hp and 450 ft lbs of torque. A reasonable 5.6 seconds gets the big box from standstill to 60 mph, and the idea of hitting the limited 130 mph top speed in a vehicle less aerodynamic than Noah’s ark is far more daunting than scaling a 45-degree slope, which the G550 is eager to do.

Power delivery is S-Class smooth, supremely comfortable, quiet and as well suited for highway cruising as it is for desert exploring. Not that many owners will subject their G550—starting at $130,900—to such dusty indignities. But just the very fact that they can is what matters. Our example was fully equipped, stickering at $151,415, in large part from the optional $13,050 G Manufaktur Interior Package. It should be noted that the G-Manufaktur Program allows for more interior and exterior customization than ever before. Inside the G550, every component looks and feels like a quality piece, and even incidental things like door pockets are beautifully finished. If this 5,400-pound Mercedes-Benz feels solid and well made, it’s because every fastener, seam and surface is engineered and finished for the long haul, and then hand-assembled in Graz, Austria.

Hoisting oneself into the cabin is easy, and behind the wheel, the driver feels in command of every sort of road. With 9.5 inches of ground clearance and riding high, the SUV provides excellent visibility due to the huge expanse of windows that glaze the four doors, windshield and backlight. Sometimes a flat piece of glass is just what the doctor ordered.

A prowess for off-road climbing is part of the G550’s character.  Photo: Courtesy of Mercedes-Benz AG.

Let’s talk about those doors for a minute. My driveway has a steep incline that requires any car to enter in reverse, lest clutches be incinerated and tires shredded when attempting to back up and exit. It also means that every car door, excepts ones that swoop skyward like a McLaren’s, will eventually slam shut on occupants’ legs upon ingress or egress. It’s always a race to see if I can avoid being crippled by doors that appear to be stationary and decide, at the last nanosecond, to slam shut under their own weight. On my leg.

The only door in 30 years of bruising that will stay open regardless of the incline is that of the G-Wagon. Bless the engineers who designed a door that stays put, sufficient justification to recommend this vehicle. Plus, closing those doors is an adventure in aural delights. Prison wardens will applaud the heft and assuredness with which the vault-like slabs snick shut, as resolute as any Chubb safe. And when underway, the auto-lock function bolts them all with a sound akin to a round being chambered in a pump-action shotgun. Alarming at first, it becomes a satisfying sound—a reassuring reminder that the big G is one solid piece of work. The other satisfying sound comes from the Burmester Surround Sound System, standard equipment on the G550.

Trading keys for the Mercedes-AMG GLE 63 S Coupe is an experience in time travel; like going from a set of Encyclopedia Britannica to Siri. For sheer visual presence, the GLE 63 S Coupe has few rivals, though calling this thing a coupe is like meeting a 300-pound bouncer named Tiny. In the case of our tall, long and wide car, it came with the $1,750 carbon-fiber trim package.

With a base price of $116,000, and stickering at $128,250, this SUV delivers a ton (2.8 tons, actually) of value—and performance too. Its 4.0-liter twin-turbo V-8 makes 603 hp and 627 ft lbs of torque, launching the 5,663-pound vehicle from zero to 60 mph in 3.7 seconds and allowing for a top speed of 174 mph. The performance of this SUV is positively obscene, with its sights set on sporting competitors like the Porsche Cayenne Turbo Coupe. Value-wise, this Mercedes-AMG SUV is a tough deal to beat.

The interior of the AMG GLE 63 S is all about the amenities, especially the new Mercedes Benz User Experience (MBUX), a multimedia system based on Artificial Intelligence and an intuitive, voice-activated operating system. Any number of Advanced Driver Assistance Systems (ADAS) put Mercedes at the forefront of safety, with multiple systems that activate, evade, and even predict.

The model’s PRE-SAFE technology, for example, measures when a collision from behind is imminent. Another system emits a short interference signal if an imminent collision is detected, triggering a reflex in the human ear that can help reduce hearing loss in the event of an accident. Yet another system moves the driver, or front passenger, as much as 2.75-inches away from the impact zone by rapidly inflating the seat’s side bolster, reducing the load on the occupant during an accident if a lateral collision is detected. Someday, all vehicles may feature such advanced and proactive functionality, but for now, Mercedes-Benz is leading the way.

The real reason to own a hot-rod SUV like the GLE 63 S Coupe, however, is because of the tactile satisfaction it delivers. The bellowing exhaust, instant acceleration and crisp and responsive handling have drivers in disbelief that something so large and luxurious can perform so brilliantly—as does the G550, but in a completely different way. Thankfully, we have chocolate and vanilla, and for those with room in the garage, two very satisfying Mercedes-Benz SUVs.