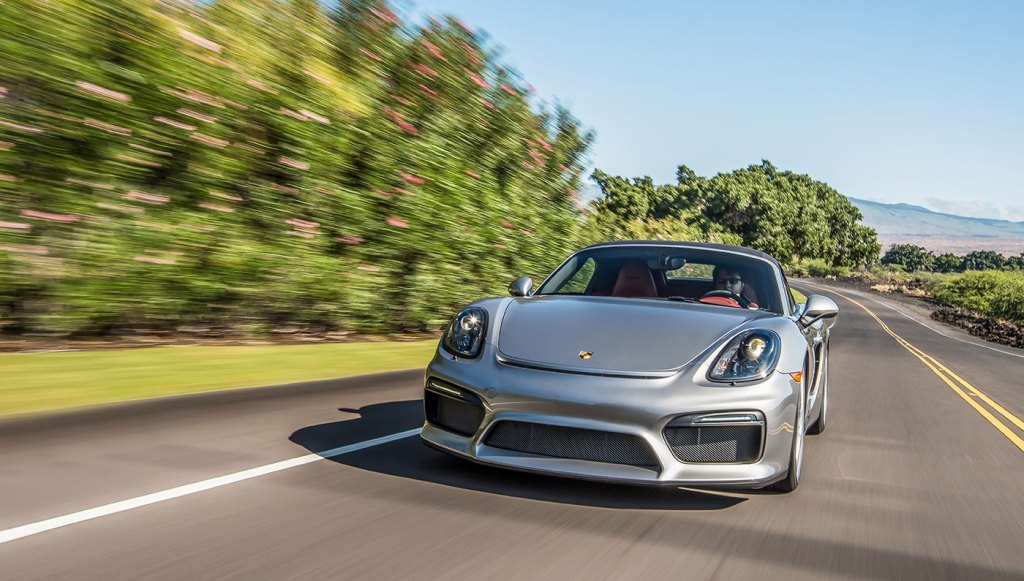 Sports cars are, in their purest form, exercises in minimalism, abiding by the well-worn maxim, “less is more.” The 2016 Porsche Boxster Spyder embraces an extreme approach to this philosophy by omitting air conditioning and audio systems from its standard equipment list to save weight—yielding, in return, greater speed. Additional mass is trimmed through further equipment removal, including the jettisoning of the Boxster’s hydraulic top mechanism (saving 24 pounds) and numerous incremental deletions, such as the top liner and inside door handles, which are swapped with nylon straps to save an additional pound. The aggressive diet brings the Spyder’s curb weight down to a mere 2,899 pounds.

The Boxster Spyder utilizes the 911 Carrera S’s 3.8-liter flat 6-cylinder power plant, coaxing 375 hp in this application—10 hp less than the more track-oriented Cayman GT4 model, but 45 hp more than the next most powerful Boxster. The engine enables a zero-to-60-mph time of 4.3 seconds and a top speed of 180 mph. The brakes are also borrowed from the 911, while the suspension is similar to that of the lowered and stiffened Boxster GTS model.

Despite slow moving traffic, charging the Boxster Spyder through the Big Island of Hawaii’s blackened volcanic terrain and lush tropical landscapes is like a shot of Kona espresso, thanks to the roadster’s nimble responsiveness, lively feedback, and wonderfully charismatic naturally aspirated engine. The power plant makes racecar-like pops and burbles when the sport exhaust button is depressed. In this mode, the Spyder’s raucous voice eggs on the exploration of the upper reaches of the power band, which in any mode tops out at an astronomic 7,800 rpm. Though shorter gearing would further enliven the Boxster Spyder’s acceleration and engine responsiveness, the car delivers a stirring blend of sharp handling and screaming acceleration (particularly when the engine climbs above 4,500 rpm). Impressively, the suspension also handles bumps and potholes with grace, despite its responsiveness.

Though Porsche has otherwise embraced their paddle-equipped automatic dual-clutch PDK transmissions, the Boxster Spyder (from $82,100) can only be ordered with a 6-speed manual gearbox—a telling tribute to its adamant focus on driver involvement and performance purity. (porsche.com)