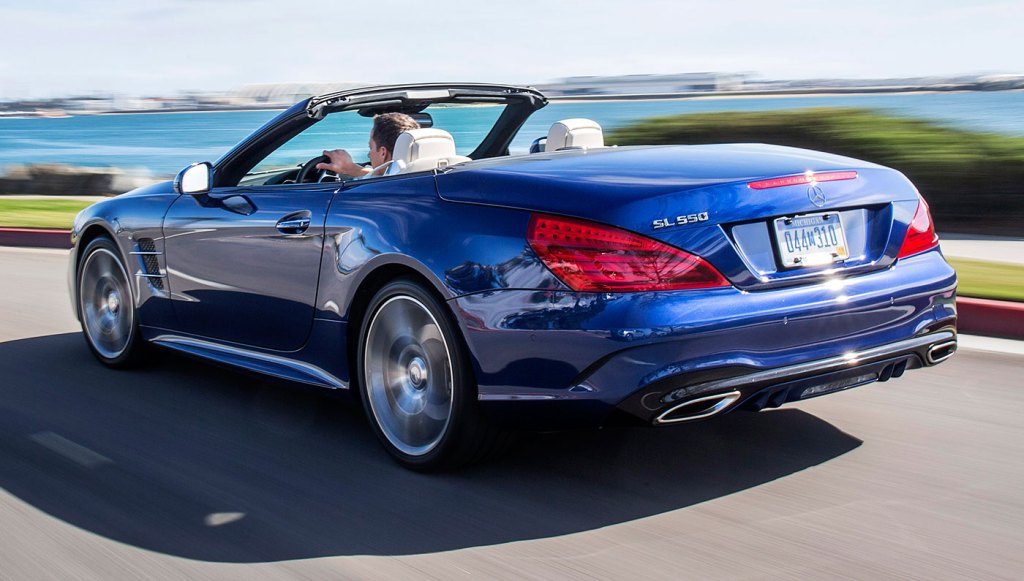 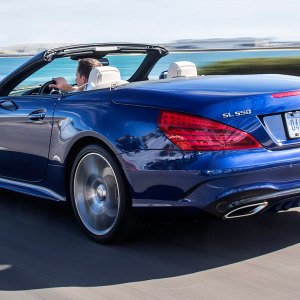 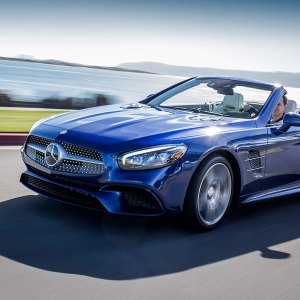 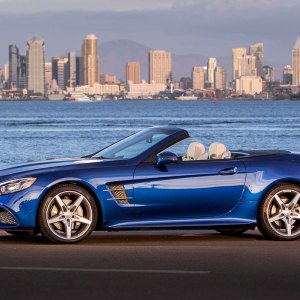 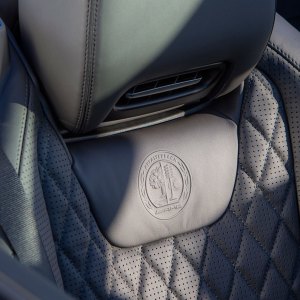 Even Germans know California is the best place to launch a convertible.

“This car looks much better here than in Europe,” says Vitalis Enns, designer for Mercedes-AMG, while sitting in the shade on a sunny February day en route from Newport Beach to San Diego. He should know; he helped bring to life the high-performance versions of the Mercedes-Benz SL-Class, updated with a new face and added features.

The first SL Roadster dates back to 1957 and was the open-top successor to the iconic 300SL gullwing. Now in its sixth generation, the SL-Class gets a refresh for 2017 that makes it visually more akin to its earliest predecessor. Everything from the A-pillar forward has been redesigned: Sheet metal has been resculpted with twin power domes on the hood, the headlights are new, and the front grille has been stretched and reshaped.

Four variants of the SL-Class will go on sale in the United States in mid-May. The SL450 replaces the SL400 (although its name stays the same in Europe), powered by an updated version of the 3-liter, twin-turbocharged V-6 engine that now produces 362 hp—an increase of 34 hp over the previous power plant. The SL550’s 5.7-liter, biturbo V-8 engine carries over unchanged. Pricing has not yet been announced.

The biggest news for both of these models is a new 9-speed automatic transmission (dubbed 9G-Tronic), which is lighter and offers a broader gear ratio compared with the outgoing 7-speed gearbox. We drove the SL550 through the rocky, arid landscape of eastern Orange and San Diego counties. In most cases, the new gearbox is smooth, and shifts are imperceptible. For spirited driving, we switched into manual mode, where we could wring the most out of the hearty power train. Because the gearbox is tuned with fuel economy in mind, the system told us to upshift as early as 2,500 rpm—but of course, that choice is up to you.

An optional Active Body Control with curve tilting function is also new for the SL450 and SL550. Packaged as an additional driving mode, called Curve, the system uses a variety of cameras and sensors, and works with the SL’s adaptive suspension to keep the car more level when going around a corner. Rather than a sporty feature, it is one that is designed to enhance comfort. “We call it the ‘don’t spill your coffee’ mode,” one Mercedes-Benz engineer quipped during dinner.

Two AMG models, the SL63 and the SL65, also get the updated face, with distinct AMG styling cues like an A-wing-shaped front spoiler and a new front-grille design, as well as a new rear bumper with quad tailpipes. Mechanically, the AMG models carry over unchanged, although the SL63 now comes standard with a rear-axle differential lock, previously an option. Both are still pleasing as ever to drive, especially the low-volume SL65, which boasts heart-in-your-throat acceleration from its 630 hp, 6-liter, biturbo V-12 engine that let us blow by our colleagues in an SL450 like they were standing still. But regardless of which variant of the SL-Class you drive, each captures the joy of open-air motoring in a grown-up, sophisticated package—especially if you are driving in California. (mbusa.com)