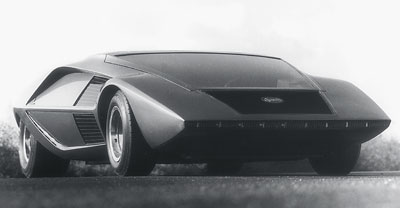 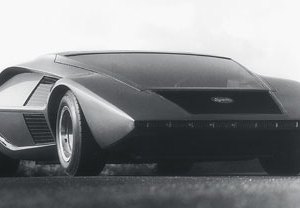 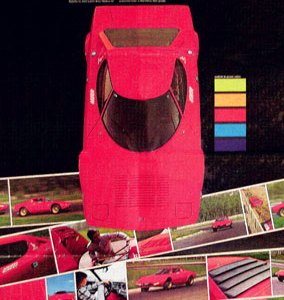 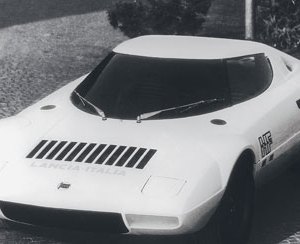 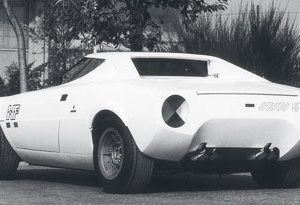 For a few years in the early and mid-1970s, one Italian coachbuilder abandoned the voluptuous rounded forms for which Italian cars had become famous and enjoyed a brief affair with the wedge. Although this is not the easiest profile to apply to an automobile, Carrozzeria Bertone, before moving on to other design concepts, created four major wedge-shaped cars, of which two (the Ferrari 308 GT/4 and Fiat X1/9) were handsome and two (the Lamborghini Countach and Lancia Stratos) were downright stunning.

Most enthusiasts are familiar with the Countach story, but the Stratos remains something of a mystery. Unlike the Countach, which Lamborghini commissioned from Bertone as a production vehicle, the Stratos was intended as a show car. Bertone designed it only to garner attention; it displayed no pretense of being functional. From that one-off beginning it metamorphosed into a fearsome performer in international rallying that also was, almost as an afterthought, a no-holds-barred road machine. Like most such cars, however, another model eventually superseded it, and all but a few enthusiasts forgot about the Stratos.

However, their devotion to the car has remained strong enough over the years for several companies to offer replicas. These cars have been equipped with a variety of powerplants, ranging from 4-cylinder Lancia units (harking back to the original show car) to Alfa Romeo V-6s to state-of-the-art Ferrari V-8s.

Most recently, an English design and development firm—called Fenomenon and funded in part by owners of original Stratoses—announced its intention to revise the Stratos name and shape for a thoroughly modern, high-performance grand tourer. Judging from the warm reception accorded the nonrunning prototype at the Geneva auto show earlier this year, the plan has merit.

At a glance, the Fenomenon car looks like an updated Lancia Stratos HF, modernized with exposed headlamps and reshaped for maximum dramatic impact. Beyond the crisp edges and more extravagant form, the most notable feature of the new car is a divided windshield, which allows for clamshell-type doors. Compared to the Bertone design, the Fenomenon car appears bulkier and more imposing, although its key dimensions are larger by only a few inches.

Everything about the Fenomenon Stratos is up-to-date. A composite carbon fiber/aluminum chassis carries unstressed carbon fiber exterior body panels. The suspension and brakes are electronically augmented. A V-8 engine (a Ferrari unit sits in the prototype) mounted longitudinally rather than transversely, as in the original, provides the power.

Fenomenon of course has not established a price for its Stratos, but like the performance of the 2,100-pound machine, it likely will approach the supercar level. The company claims to have signed on a manufacturing partner and expects to begin production as early as next year. Such expectations might be overly ambitious, but the company’s most daunting task will be to produce a car that is worthy of the original.Bertone’s show car for the 1970 Turin auto show—barely waist-high, shaped like a doorstop, and identifiable as an automobile only by its four wheels—made few concessions to reality; anyone who dared climb inside did so through a steeply raked and hinged windshield that doubled as a door. Passenger space took up the thin end of the wedge; the largest area was allotted to a small power package, the 1.6-liter V-4 engine and gearbox from the Lancia Fulvia. Some at the show laughed at Bertone’s audacious little device, others smiled with delight, and few remained neutral.

The Stratos’ potential intrigued Cesare Fiorio, Lancia’s director of competition, who attended the show. He looked beyond the minimal passenger space and mild powerplant and envisioned the Stratos as a rally car capable of the success that Lancia’s production cars had failed to achieve, regardless of how extensively his team modified them. After Fiorio quickly convinced Lancia management that his notion was not so far-fetched, Bertone began redesigning the wedge so that it would be both habitable and production-ready.

A year later, at the 1971 Turin auto show, Lancia unveiled its Stratos. Only the basic wedge form survived the development process; the new version was equipped with a proper passenger compartment, with a proper door on each side, plus appurtenances necessary for real-world driving: headlamps, windshield wipers, and the like. But the Stratos had no bumpers; Italian law did not require them.

The underpinning for the car, officially called the Lancia Stratos HF, was a steel body unit with outriggers—built from sheet and tubular steel elements—fore and aft to support the suspension and power train. The nose and tail sections also were formed of steel. Although ruggedly constructed, the Stratos, because of its diminutive dimensions, weighed a mere 2,180 pounds. Its wheelbase measured only 85.8 inches (some two inches shorter than a contemporary Porsche 911), and its overall length was just 146.1 inches (nearly two feet shorter than a 911). The car was low, too, measuring 43 inches from ground to roof peak.

If the Stratos had acquired a patina of functionality, it had not lost what some designers later called its “surface excitement.” The windshield, for example, was a sharply raked continuous curve that appeared to have been cut from a cylinder of glass. Although it had sprouted air intakes and pop-up headlamps, the nose retained its resemblance to a chisel, and the rear of the body ended abruptly, with minimal overhang. In profile, the combination of a beltline that rose quickly from the nose to a point just aft of the doors and a low roof suggested a cramped cockpit while accentuating the wedge form.

The cabin was indeed tight, but reasonably comfortable for two friends or a rally driver and navigator. It featured a pair of deeply contoured seats upholstered in velour, a dashboard full of vital gauges—seven of them—and switches, and not much else. Certain road-going amenities received short shrift: Air-conditioning was absent, but the side windows did lower slightly, and stowage space consisted of the capacious door pockets, which were designed to hold racing helmets.

Lack of stretch-out space might concern a Stratos driver, but not as much as the absence of rearward visibility. The view through the windshield was exemplary, which was all a rally driver cared about, but the car’s thick B-pillars and its then-fashionable louvers, covering what was already a tiny rear window, made side-view mirrors essential.Lancia did provide compensations for these design quirks. Most notably, it replaced the anemic Lancia V-4 that powered the original show car with the four-cam V-6 engine and gearbox from Ferrari’s Dino 246. As it did in the Dino, the 2.4-liter light-alloy engine developed 195 hp, which gave the lighter Lancia an impressive zero-to-62-mph time of 6.2 seconds and a maximum speed greater than 140 mph.

Lancia’s primary goal for the Stratos was to win rallies, but as required by the eligibility rules of international rallying, it ordered 500 road-legal examples from Bertone—and then made minimal effort to market them. Although examples trickled into other countries, including the United States, Lancia sanctioned the sale of Stratoses in only three European nations: West Germany, Belgium, and Italy. Unsold cars, some never completed, remained at the factory until as late as 1978.

Those brave souls who spent time behind the wheel of a Stratos found it to be a most demanding car, capable of generating perspiration for reasons beyond the lack of cockpit ventilation. The combination of grippy tires and a low polar moment of inertia lent a literal meaning to the notion of taking the Lancia for a spin. Slow steering made it even more difficult to catch the tail as it swung out. And some say that a heavy hand on the shift lever could snap the linkage. In short, all but the most expert drivers should have approached the Stratos warily.

Rally drivers, on the other hand, embrace a car that can be pitched sideways. For a few of them, including Sandro Munari and Bjorn Waldegard, the competition version of the Stratos served as an ideal mount. Faster steering and other suspension improvements made the car more responsive, and modifications enhanced the engine’s capabilities. Initially, mild tinkering increased the Dino’s output to some 250 hp, but later alterations, including the addition of 4-valve cylinder heads and turbochargers, added even more power.

The Federation Internationale de l’Automobile, the governing body for international rallying, approved the Stratos as a production rally car in late 1974, the same year that the worldwide energy crisis delayed the start of the rally season. Five rounds of the championship series ran during October and November, and Lancia’s Stratos team, by winning three and finishing third in another, garnered the championship. The Stratos team continued to dominate the series for the next two seasons.

However, perhaps the most telling testimonial to the strength and performance of the Stratos came during an event that it did not win. Even seasoned rally pilots considered the East African Safari, where road conditions were far worse than any encountered in European racing, an exceptionally challenging event. Winners usually came from the ranks of overbuilt sedans, not tiny sports cars. Nevertheless, Lancia prepared its

Stratoses for the event in 1975, beefing them up as necessary and installing what were referred to as “roo bars” to ward off errant wildlife. Although Lancia failed to win, it did earn a moral victory when two of its entries finished second and third overall. After earning three consecutive World Rally Championship titles, the Stratos still had plenty of development life ahead of it. But Fiat, Lancia’s parent company, lost interest in supporting the Stratos rally effort and shifted its attention—and resources—to the Fiat 131 sedan. While this car quickly became a successful competitor, it was hardly as spectacular in action as the Stratos. Lancia did continue to work on the competition Stratos, but the effort was halfhearted.

However, when Bernard Darniche won the 1979 Monte Carlo Rally in a Stratos, his victory rekindled interest in this unique, stylish automobile. By the early part of the 21st century, those dusty and neglected Stratoses that dealers found so difficult to sell in the mid-1970s had become collectors’ cherished jewels, each polished, pampered, and recognized as a true phenomenon.