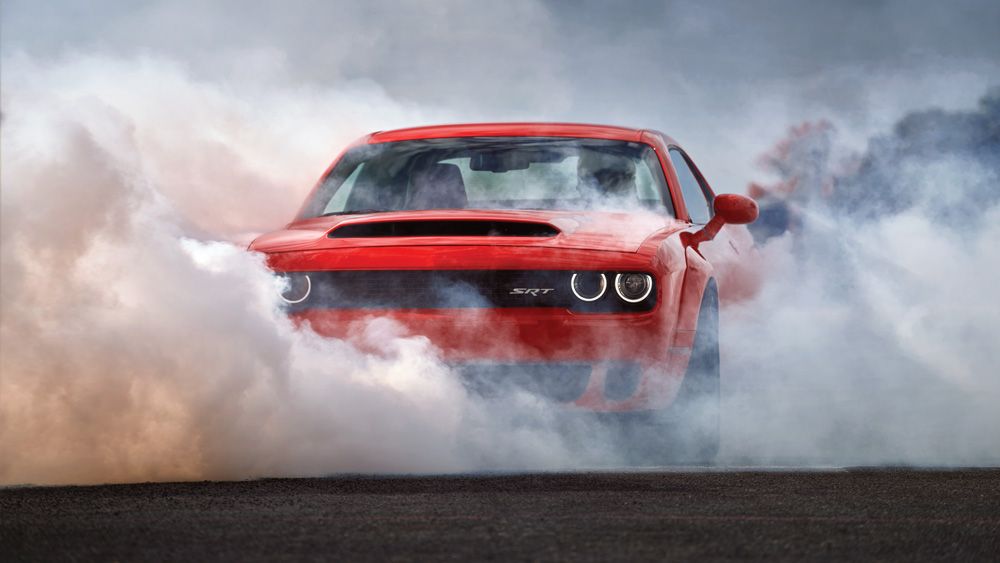 The smell of hot asphalt and burnt rubber wafts into the open windows of the 2018 Dodge Challenger SRT Demon as Jim Wilder, vehicle development manager, eases
the modern-day muscle car toward the staging area at Lucas Oil Raceway in Indianapolis. Following a prolonged burnout, which cleans and warms the tires, Wilder prepares to launch
the 840 hp Demon down the 4,400-foot-long drag strip using an electronic TransBrake, a feature he helped to develop that allows the driver to increase engine speed up to 2,350 rpm without overpowering the brakes. The result is quicker power delivery with as much as 15 percent more torque off the line.

“Launching this car is the most fun, but it’s also the most challenging,” Wilder says as I buckle in next to him, eager to experience what the car can do. “It’s a fine line to achieve the right balance of throttle control which delivers the maximum amount of grip. Once you launch, it’s all about getting the torque to the back tires with the nose in the air, feeding the car everything you can.”

The tree of staging lights activates and cycles through the colors. At green for go, Wilder—making the most of his 25 years of drag-racing experience—releases the paddle while stepping on the accelerator, and the car surges forward. It’s a smooth launch, one that delivers a maximum of 1.8 gs of force and quickly blurs the landscape beyond the windows.

At the one-eighth-mile mark, Wilder eases off the gas and slows the Demon, though my pulse is still racing. Dozens of such rides during the afternoon have left the engine running a little warm; and with the day’s temperature hovering somewhere in the low 90s Fahrenheit, conditions are far from optimal. Nevertheless, the car sprinted from zero to 60 mph in 2.8 seconds, just five-tenths of a second slower than its best time.

“It’s thrilling every single time,” Wilder says, flashing a grin. “When you get it right, you’re thrown into the back of the seat, and you’re pinned there for the full quarter-mile run. It’s the best 9 seconds of your life.”

That shot of acceleration has been the fix for those addicted to automotive speed since the 1960s—an era defined by a youth-led rebellion against the materialistic tendencies of the previous decade, especially in the United States. Automakers took note and designed vehicles that stood out—in both appearance and performance—from the ponderous cruisers of the 1950s. Those efforts led to the birth of the muscle car, a street-legal racer that was heavy on horsepower and brought motorsports to Main Street.

Just over 10 years ago, when Dodge engineers first approached the redesign of the Challenger, they took inspiration from that original muscle-​car era. According to Tim Kuniskis, head of passenger car brands for Fiat Chrysler Automobiles North America, Dodge’s developers surveyed the marketplace and identified the car’s main competition—the Ford Mustang and Chevrolet Camaro. They recognized that there was little to be gained from creating a car that offered similar specs and driving experiences to those of these other vehicles. Instead, Dodge debuted a 2008 Challenger that was deliberately larger than its competition.

“We’re going to be more muscle car,” says Kuniskis, recalling the brand’s strategy for the latest Challenger iteration. “More street strip, more lifestyle and attitude than cutting tenths of a second off road-course times. That was the car.”

When engineers from the Street and Racing Technology (SRT) division set out to build the Demon, which starts at $84,995, they began with a supercharged 6.2-liter V-8 engine that pumps out 840 hp and generates 770 ft lbs of torque. Because the car was designed with the drag strip in mind, the SRT team focused on incorporating into a street-legal vehicle the key attributes and abilities that all competitive drag-racing cars share. Every drag racer, for example, features a suspension that mechanically lifts the front end and firmly holds the back end down for better traction. The SRT folks found a way to accomplish that electronically, resulting in a drag mode that maximizes weight transfer to the rear wheels.

The same is true for the aforementioned TransBrake. “We duplicated the whole thing with electronics,” says Kuniskis. “[With the paddle shifters engaged] the computer holds all the clutches closed and the car can’t move. Release the paddle, and the car launches.”

Similarly, the SRT engineers found a way to more efficiently cool a drag car’s engine between runs. Historically, racers have used bags of ice to chill the upper portion of the engine, which cools the incoming air and produces more power. SRT devised a chilling system that cycles refrigerant-​cooled air to the supercharger’s heat exchangers. “With a flip of a switch, the car thinks it’s 30 degrees cooler out,” says Kuniskis.

An after-run cooling system also keeps the engine fan and low-temperature circuit coolant pump running after the engine shuts down. The coolant’s temperature can be monitored on the instrument panel’s touchscreen, which lets the driver know when the supercharger has reached the optimum temperature for another run down the strip. Together, the two systems can lower intake air temperature by as much as 45 degrees Fahrenheit.

“This stuff isn’t an invention,” Kuniskis acknowledges. “We just looked at all the things that drag racers do to their cars—we took all their tricks, and we modernized them.”

Only 3,300 Dodge Challenger SRT Demons will be produced, and the demand has been daunting. Kuniskis has heard stories of customers paying as much as $50,000 above the MSRP to guarantee their place on a dealer’s allocation list, which makes him believe that many customers are purchasing the car as a speculative investment. “They’re never even going to take the plastic off the seats,” he says, adding that about half of the Challenger SRT Demons produced are likely to get “put away in storage and never see the light of day until they go through a Barrett-Jackson auction in 20 years.”

Wilder has mixed emotions about such a reality. “It’s cool to have created something so special that it has that kind of investment stature,” he says, “but if you just park it in your garage, you’re really missing out on a great driving experience.” To hell with that.