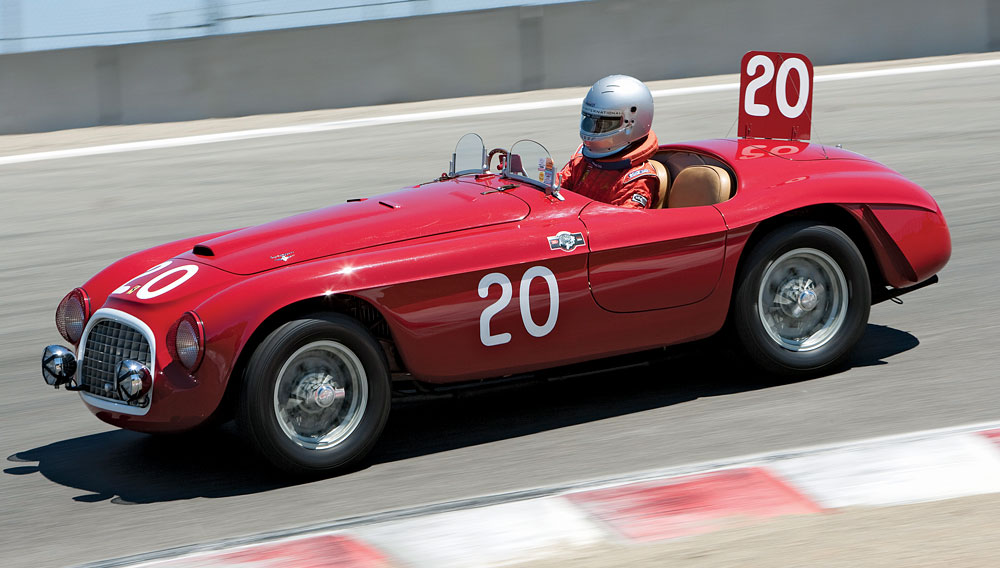 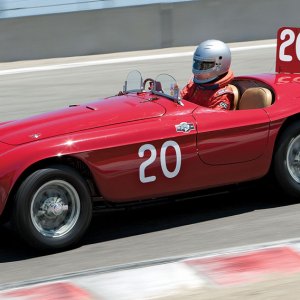 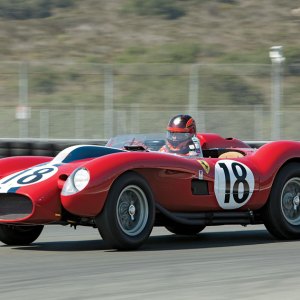 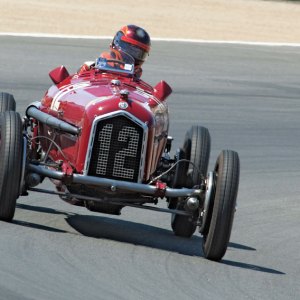 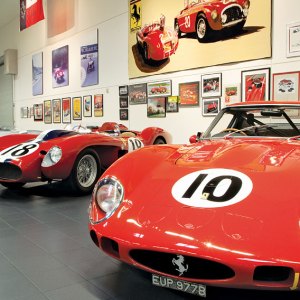 Jon Shirley wouldn’t say that he is making up for lost time. But he might go along with the notion that good things come to those who wait. The 74-year-old auto enthusiast possesses a stable of 28 automobiles (mostly Italian racecars and exotic sports cars), but he never owned a car prior to his 25th birthday.

However, driving a car is not dependent upon owning one, and if Shirley was fashionably late to the ownership party, when it came to the driver’s ball, he was one of the first to arrive. Shirley’s initial taste of action behind the wheel came when he was 10 or 11 years old. After rigging a makeshift contraption that allowed him to reach the pedals, the young auto enthusiast would drive an old, derelict pickup truck around his uncle’s farm in Pike Road, Ala., a rural hamlet southeast of Montgomery. A few years later, as a junior high student on a naval base in Puerto Rico, Shirley was allowed to drive the family’s station wagon around the compound. All of the MPs reported to Shirley’s father, which gave the young motorist some leeway on the roads. “As long as he obeys the speed limit,” Shirley recalls the MPs telling his father, “we’ll leave him alone.”

Later, Shirley attended an all-boys boarding school, which left only the summers for driving the family Buick; and during his late teens and early 20s, Shirley lived in Boston, a city with a widespread public transportation system that made owning a car unnecessary. Naturally, when the opportunity to buy a car finally presented itself, Shirley wanted something fun. He ended up in a 1961 4-cylinder Sunbeam Alpine. By the time Shirley decided to build a collection, which coincided with an early retirement at the age of 52, he had long moved on from that little British sports car. However, Shirley’s motivation for buying the Sunbeam—to own a car that was fun to drive—remained his motivation when he bought the first of many Ferraris, a 1967 275 GTS Spyder. “It wasn’t a great car for the collection,” Shirley says in retrospect. “It wasn’t rare or considered a highly sought-after car. But I had a chance to get it, and it was mainly about having something fun to drive. After that, I started to get more serious. At first it was just, let’s put together a collection of cars that are fun. Then it became, let’s put together a collection of cars that’s significant.”

Of the 28 cars that make up Shirley’s collection, and which are on display in an approximately 12,000-square-foot showroom not far from his home in the Seattle area, almost half bear Enzo Ferrari’s prancing horse emblem. Many years before Shirley took his first steps down the auto-collecting path, he and his family were visiting the Nivelles-Baulers racetrack outside Brussels, Belgium, and it was there that Shirley watched Ferrari Club members attempt to conquer the 2.3-mile-long track in the marque’s latest Boxer models. That was all Shirley needed to see. “There were all these Ferraris tearing up the track,” he recalls. “That is when I decided that if and when I could collect, Ferraris were the car to get.”

As evidenced by Shirley’s first automotive purchase, that 1961 Sunbeam, the attraction was always to sports cars. By the mid-1960s, Shirley owned a Triumph TR3B and a Jaguar XK-120, so it comes as no surprise that by the late 1980s, once the auto enthusiast decided to collect—and began collecting Ferraris in particular—he gravitated toward sports and race cars. Considering that he’s a collector who found a way to drive before he was big enough to reach the pedals, none of his vehicles remains stationary for long. When asked if he has a favorite, Shirley answers without hesitation. “Whatever I’m driving, that’s my favorite,” he says. “It’s fun to say ‘this Ferrari’ or ‘that Ferrari,’ but I tell you, [when] I get in that [1965 Shelby] 289 Cobra and tool around . . . that’s my favorite car that day.”

Shirley’s wife, by contrast, has an easier time choosing a favorite. For her, it’s a 1949 Ferrari 166 MM Barchetta, which the couple has driven in numerous road rallies over the years. But she’s also quite fond of a 1954 Ferrari 375 MM Scaglietti coupe, and not just because it’s the only car of its kind. This particular Ferrari, which Shirley purchased  in the mid-1990s, was built for Italian film director Roberto Rossellini, and it was delivered to him during the period of time when he was engaged in a scandalous affair with Swedish actress Ingrid Bergman. “My wife likes to say that whenever she gets in the car, she’s putting her tush where Ingrid Bergman used to sit,” Shirley remarks with a chuckle.

The custom bodywork of Sergio Scaglietti turned the car into a majestic tourer, but under the hood remained all the power and performance that Ferrari was capable of injecting into its racing roadsters of that era. How Shirley came to own such a striking and rare automobile is a story dictated by equal parts patience and persistence.

It began with an acquaintance—a fellow American—who knew of a British car enthusiast living in France. The existence of this particular automobile was common knowledge for quite some time, but it also was common knowledge that, due to a handful of unpleasant meetings with pushy American collectors in the past, the French owner of the car refused to negotiate with Americans. At the suggestion of his friend, Shirley contacted the British car enthusiast and managed to set up a meeting with the French owner. Eventually, after remaining very low-key during the negotiations, Shirley convinced the Frenchman to sell. That alone was no small feat.

According to Shirley, the previous owner had found the car (in pieces) in a Sicilian barn, brought the pieces back to France, and attempted to rebuild the historic automobile. In the 25 years that he had owned it, the Frenchman never came close to completing the car, but he knew just how special a car it was. “He brought out a bottle of Champagne,” Shirley recalls of the day the Frenchman sold him the Ferrari, “and I swear there were tears in his eyes. It was a very emotional thing for him because he knew it was [so] rare.”

Shirley doesn’t like to speak of the amounts of money that he’s spent for his cars over the years—least of all the 1954 Ferrari Scaglietti coupe—but he willingly acknowledges that it was an amount at which many people likely scoffed. “At the time, I’m sure people would say that it was the most astronomically dumb amount of money to spend on a car that’s in bits and pieces,” Shirley says. “But I always say the same thing—‘Yes, but [now] I have the car.’

“In the high-end collector car world, time solves all purchases,” he continues. “There’s nothing that’s really good that’s [ever] worth less than it was 10 or 15 years ago.”

So Shirley now had a once-in-a-lifetime Ferrari, but still there was a problem. The car was in boxes. If the story of this Ferrari Scaglietti coupe was a two-act play, the second act is all about restoration. No restoration effort is ever easy, and most, according to Shirley, take about two years. That was true for this particular Ferrari, but the initial research took much longer. In its early years, the car rarely was photographed, and because this was the only example built, Shirley and restoration guru Butch Dennison had to dig deep to find enough material to guide them in their efforts. It didn’t help that the car’s previous owner, in his own attempts to rebuild the car, accidentally discarded pieces that should have been kept.

In the end, Dennison’s restoration team rolled out what Shirley describes as “a stunning car,” but Shirley and Dennison wouldn’t know just how successful their efforts had been until the car was shown at the Pebble Beach Concours d’Elegance in 1998. In a stroke of perfect timing, Sergio Scaglietti was in attendance at that show—it was the famed Italian auto designer’s first trip to the United States—and through the use of an interpreter, Shirley and Dennison finally could chat with the car’s creator. “We asked him if we did it right, and he said we did,” Shirley recalls. “It was thrilling to see him see the car and see his eyes light up.”

The Ferrari easily won Best in Class at that concours that year, and according to Shirley, the car received more Best of Show votes than any other postwar car in the last few decades. As news spread about the coupe, Shirley’s popularity throughout the car-collecting world skyrocketed. He says his phone finally has stopped ringing off the hook, fortunately. “People have stopped calling me, asking if I’m going to sell it,” he says. “They finally realized [that] I’m not going to.”

Shirley has sold a handful of cars over the years, and though those decisions were never easy ones to make, he says that they either led to the acquisition of additional vehicles or they allowed him to invest in a vacation home in Maui. Shirley acknowledges that collecting can be addictive, but he says he’s never let the hobby consume him as far as his automobiles are concerned. “At one point it became enough,” he says. “I have so much money tied up in cars and I have so many cars, I just didn’t see that I wanted to have more cars or more money tied up in them.”

Shirley made one exception to that decision when he was offered a chance to own a 1938 Alfa Romeo 8C 2900B coupe in 2005. “It was such a no-brainer to go buy that car,” he says. “These cars were like the supercars of 1938. They were slightly detuned, Grand Prix–powered cars. They ran on gasoline instead of alcohol, and a few of the superchargers were a little smaller. It was limited production and very expensive, and it was a marvelous piece of engineering . . . all of which made it a difficult restoration.”

The restoration angle is really the key for Shirley. He’s currently in the middle of his last restoration project—a 1951 Ferrari 212 MM Vignale coupe, which he’s owned for 17 years. Once that project is complete, Shirley’s days as an active collector will be behind him, he says. He’ll continue to vintage race, drive in worldwide road rallies, and show cars at various concours events, but the likelihood that he’ll invest in new additions to his collection is low. However, he won’t completely rule out the possibility. “If somebody finds something in a barn and I’m around and it’s got potential, I might do another [restoration],” he says.

For him, that’s where things get fun, but he says the enjoyment is predicated entirely on the process itself. Never does he focus on the amount of money he’s investing or the amount of money that the car may someday be worth. “It’s like doing a hot rod,” he says. “Those guys never come out ahead, but they’re happy. They did it, they got it done, and they love to take it around. That’s the whole thing. You should be happy when you’re done. Even if you don’t get the money out of the car that you put into it, if you had a lot of fun in the process of doing it, that’s what it’s all about.”