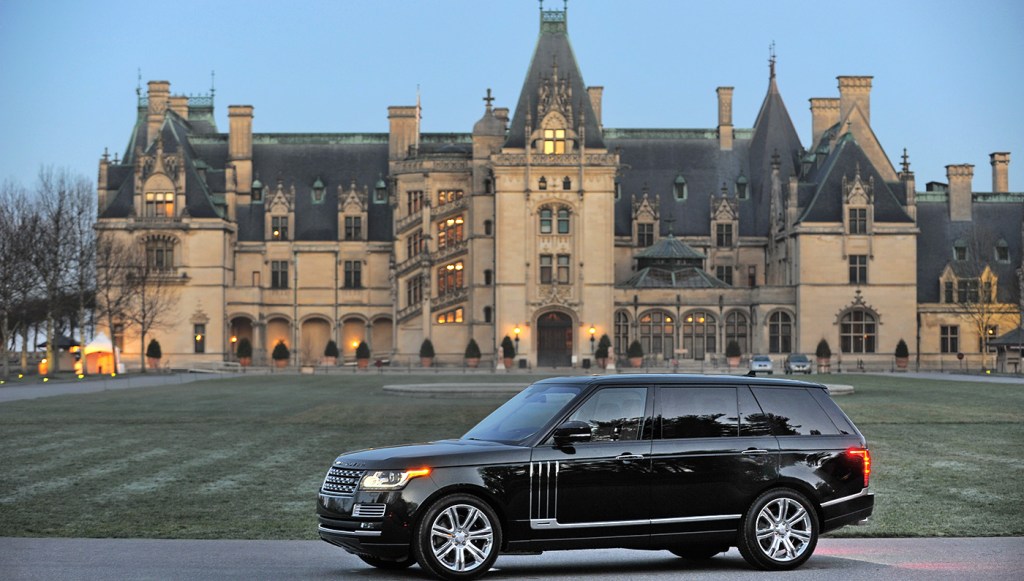 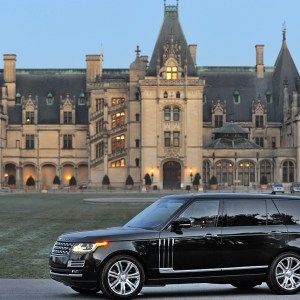 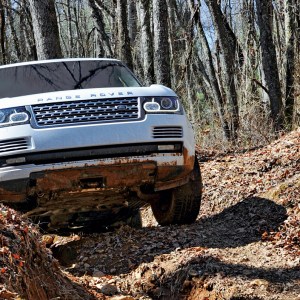 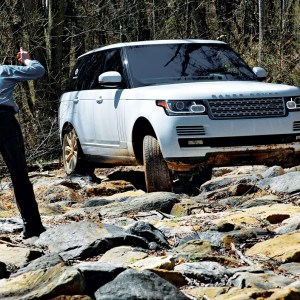 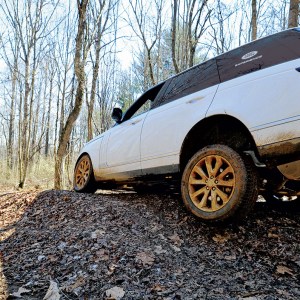 At the Biltmore Estate’s Land Rover driving school, you can pay attention or pay the consequences.

For close to an hour, each diesel-powered Range Rover Sport HSE Td6 in our four-vehicle caravan had flawlessly navigated the nearly 50 miles of trails that compose the Land Rover Experience Driving School’s course at the Biltmore Estate in Asheville, N.C. But now we were stopped. From my vantage point in the driver’s seat of the second Range Rover—rolled at a 30-degree angle to the left because of the uneven terrain—I could see only a portion of the lead vehicle. It sat about 30 yards ahead, in a gully between two mounds of dirt.

We had reached the halfway point of the driving school’s signature trail, a quarter-mile route that snakes around hillocks and hummocks like a mogul course as it drops about 150 feet in elevation from the start to its lowest point. Greg Nikolas, the driving school’s head instructor, had earlier noted that this trail calls for “the finer points of off-road driving technique, where it’s more about finesse than muscle.”

While I waited for the lead driver to find a way out of his predicament, Aaron Owens, my instructor for the day, leaned in through the driver’s-side window to offer some pointers about tackling the road ahead. (Due to the precise—and slow—driving that is required on this stretch of the trail, the instructors guide students from outside the vehicle.)

“Instead of cutting down that chute where [the lead Range Rover was], we may try to cut to the right and climb over the top of this mound,” he said, pointing to a mogul about 5 feet above the lead vehicle’s location. “But we want to be careful not to become a seesaw,” he added, evoking an image of this 4,700-pound, $73,000 Range Rover teetering on the peak of the mound.

If that had happened, it probably wouldn’t have been the first time. The Land Rover Experience Driving School has operated at the Biltmore Estate since 2004, offering a variety of off-road instructional programs on trails that cover about 3,000 of the estate’s 8,000 acres. The programs range from 1-hour lessons that cost $250 to 2-day seminars that cost $2,400.

The school’s presence on this Gilded Age estate is not as incongruous as it may seem. The land was initially developed by George Vanderbilt, the grandson of the shipping and railroad tycoon Cornelius Vanderbilt. The younger Vanderbilt was also one of the earliest automobile enthusiasts; he bought his first car, a Panhard et Levassor, in 1904.

In 1889, Vanderbilt began developing property that he had acquired in the Appalachian Valley of western North Carolina. The Biltmore Estate would eventually cover 125,000 acres, and by the time Vanderbilt owned a car, he was busy constructing a network of roads and trails throughout the property. (Following Vanderbilt’s death at age 51 in 1914, his widow, Edith, sold or donated most of the land, including 87,000 acres that form the Pisgah National Forest.)

Shortly after he started buying the land, Vanderbilt commissioned the famed architect Richard Morris Hunt to design and build a country home. (Hunt’s notable projects include the Breakers mansion in Newport, R.I., which he designed for George’s older brother Cornelius Vanderbilt II.) The Biltmore House—a 250-room, 175,000-square-foot French Renaissance design that houses artworks by Renoir and Sargent and includes a banquet hall with a 70-foot ceiling, 65 fireplaces, a bowling alley, and an indoor swimming pool—was completed in 1895 and has been open to the public since 1930. It is the largest privately owned house in the United States.

An inn opened on the estate in 2001, and a hotel opened last year. Among the amenities available to guests is a clay-shooting facility, which is where Land Rover was displaying its limited-edition Holland & Holland Range Rover (see “Riding Shotgun,” this page). My day would end there with a shooting lesson, once we completed the off-road tour.

“We don’t want to take a perfectly straight angle across it,” Owens said, continuing to advise me on how to approach the mound in front of us. “We want the left front tire to be on the point, but not on the downslope side, because we’ll just slide off, and then we will be high centered. So if anything, we want to err toward the other side. That way gravity will feed us off that way if we slide—and we probably will slide a little bit. We’ll also be fairly close to this tree over here.”

Before I could execute Owens’s plan (which I would do successfully), the lead driver had to move his vehicle. When a few more minutes passed, I asked Owens, “Are they stuck?”

He then unrolled a set of straps, attached them to the rear of the lead vehicle and to the front of my vehicle’s undercarriage, and demonstrated how one Ranger Rover Sport HSE Td6, with its 3-liter turbodiesel V-6 generating 254 hp and 440 ft lbs of torque, can tow another.

Land Rover operates three other off-road driving schools in North America: at Quail Lodge in Carmel, Calif.; at the Equinox Golf Resort & Spa in southern Vermont; and at Fairmont Le Château Montebello in Quebec. The Biltmore course is unique among the group because it’s set in a temperate rain forest, which means the trails are often muddy. “The diversity of the terrain, coupled with the weather, allows us to see principles of vehicle dynamics across a broad spectrum,” explained Nikolas. “For example, we can talk about how the techniques that are needed to control a vehicle down a muddy hill can also be used to control a vehicle on a snowy road.”

Vehicles that are as technologically advanced as the Range Rover Sport HSE may lessen the need to master those techniques, but no amount of torque or assortment of stability-control features will enable every driver to conquer any trail. However, a combination of technology and driving techniques is also not a guarantee against failure. “The rules of inertia come into play,” Owens says, “where an object in motion tends to stay in motion. You just have to be committed to the line and hope it’s the right line.

“And if it all goes sideways,” he adds, “we’ll just pull out the straps again.”