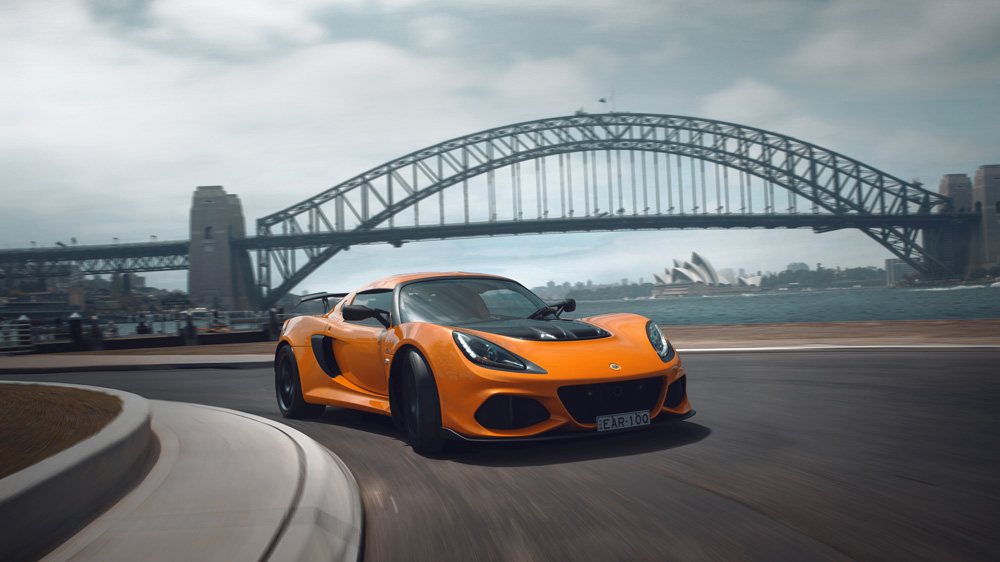 Prior to the pandemic, friends and family marveled that I was flying to Australia for a story. “Why would you go there now?” they asked, incredulous that I’d willingly travel to a country that was in the midst of raging wildfires. The juice, I reasoned, was worth the squeeze. I was journeying to experience the Lotus brand in a way that would not have been possible stateside—or anywhere else in the world, really.

To most folks, a racetrack is a racetrack and a car is a car. But not all racetracks are created equally, and if I have to explain that some cars are more special than others, you might want to jump straight to our Food & Drink section.

Mount Panorama Circuit, commonly referred to as “Bathurst,” is a 3.86-mile track nestled in the hills of New South Wales, a two-hour drive from Sydney. You can easily make the trip in half that time, but Australia’s draconian traffic laws and omnipresent speed cameras all but guarantee hefty fines for speeders—ask me how I know. Weeks after my visit, I received a $190 fine for exceeding the posted limit by a mere 10 mph. Seriously.

With the nation’s institutionalized disdain for fast driving that dates back to the early 20th century, it’s no wonder Bathurst’s mayor Martin Griffin, a motorsports enthusiast, found a loophole by declaring the windy stretch a “tourist road” with the implied benefit of attracting visitors—and, presumably, tourist dollars—on March 17, 1938. Within two months of its opening, the road attracted over 20,000 spectators gathered to watch race cars being driven in anger at Mount Panorama’s first motoring competition, the Australian Tourist Trophy. Since then, the route has remained public and subject to traffic rules and law enforcement for all but four days of the year, when it’s shut down and transformed into a bona fide racetrack.

A Lotus Evora takes to the track.  Photo by Emma Morley, courtesy of Lotus Cars Limited.

In competition mode, anything and everything goes here: cars careening into each other, colliding with barriers, and battling for supremacy as they push the limits of human and mechanical endurance—all in the name of sport. Every other day of the year locals use the route to ramble down the hill, commute to work, and return back to their bucolic homes.

The world has changed in the decades since Griffin had the vision to carve a corner out of the lush landscape for motorsports. But the primal urge to gawk at cars going fast remains unchanged after all these years, a reality that occurs to me when I’m up before the sun on race day at the Bathurst 12 Hour to watch race cars lineup on the grid in darkness. This grueling, half-day long endurance race was launched some three decades ago, and this year’s qualifying sessions were even more colorful than usual thanks to a preponderance of kangaroos bounding on and off the track. The ‘roos, which race organizers attempt (but often fail) to contain with makeshift fences, spring onto the circuit to hilarious, and thankfully inconsequential, effect.

The racing at Bathurst is particularly fierce because this ribbon of pavement was built as a road not a circuit, leaving virtually nowhere for cars to go if they lose control or are bumped by another vehicle, especially along the Skyline and esses part of the track, where a dizzying 16 percent grade meets unforgiving concrete barriers. Walking the track on the day before the race was strangely peaceful, save the neighborhood kids careening down the course on skateboards, bicycles and improvised scooters. Hiking up the hill to experience the race in real time was like witnessing a 21st century automotive Woodstock, complete with a full cast of local characters plucked directly from central casting.

Watching the Bathurst 12 Hours was a once-in-a-lifetime opportunity. But why would Lotus fly me halfway around the world when the extent of its race participation consisted of a static display of cars and rumblings of possibly maybe joining the field the following year? I hit the road in a gaggle of a half dozen or so Lotuses—and later, up the gnarly Mount Panorama Circuit—to connect the dots.

The only Lotus model currently for sale in the US is the Evora GT, a lightweight sports car that feels and behaves like a grown up, more buttoned-down cousin to the Elise and Exige. Those edgier models were offered stateside until 2011, when their exemption for advanced airbags expired. Those latter models have continued evolving in other global markets, and sampling their latest, most extreme iterations was like re-experiencing the humble Elise model through the lens of a nostalgic flashback on steroids. Now weighing just over 2,300 pounds but packing a 410 hp supercharged V-6, the Exige 410’s flared and spoilered body is an accurate visual marker for its capabilities: it feels laser sharp and wicked fast, with palpable downforce which makes it absolutely at home on a racecourse.

Driving these Lotus models through New South Wales wasn’t quite how I imagined it to be. For starters, if you’re expecting rugged outback, you’d have to drive several hours—with those oppressively slow speed limits, of course—into the nation’s interior, to see where the uniquely remote terrain begins. At least when traversing the areas surrounding Marrangaroo National Park, I saw seemingly endless stretches of forest, much of it predictably charred and decimated from the wildfires. But I also laid eyes on gorgeous layers of lush greenery untouched by flame, like at the lovely Spicers Sangoma Retreat in the Blue Mountains, where I stayed in a treehouse-like bungalow.

The driving, particularly on smaller backroads where the threat of speed cameras diminished, was intensely satisfying. Lotus has long been considered a driver’s brand, and the Elise, Exige, and Evora examples on hand are clearly focused on maximizing the pilot’s pleasure, with minimalist interiors and a direct, engaging command of the road. But the cars’ native habitat was explored two days later when we returned to Bathurst for a rare track day with 102 of our closest, Lotus-owning friends. The sea of British sports cars reflected a full range of the go-fast experience, from ratty, well-worn track machines to (slightly) cushier, more modern Evoras. Hot laps in the same vehicles I drove on public roads conjured the underlying personality traits that define these rather focused machines: the Elise is nimble and precise, the Exige more extroverted and angry, and the Evora more refined and road-trip friendly.

But more telling than the curvy bodywork was the spirit of the participants, who were enjoying a rare opportunity to drive the elusive track courtesy of Lotus of Australia and Simply Sports Cars, the Sydney- and Melbourne-based dealership that specializes in the brand. It’s not just the unadulterated speed that simply can’t be accessed on the road—though there’s certainly that. It was a palpable sense of community through a shared passion of motorsports and sports cars that distinguished this crowd, one that transcends any cultural or political affiliations. These are people who unabashedly loved to drive, and many of them had traveled and trailered their cars from hundreds, and in some cases, thousands of miles away.

At least for the moment, Lotus’s bread and butter remains gas-burning, manual gearbox–equipped analog sports cars. But the marque is anticipating a brave new future with its Evija model. The all-electric hypercar was originally scheduled for release later this year, but will likely be delayed due to the coronavirus pandemic. With 2,000 hp and 250 miles of range, the gobsmackingly-styled two-seater conjures a utopian future. But given these turbulent times, one cannot help but wonder how the face of petrol-loving enthusiasm will change as the world rapidly evolves into a very different space than the one we’ve become accustomed to.

While pessimism is an all-too-easy conclusion when digesting these challenging times, an optimist might consider that the fundamentals still matter, perhaps now more than ever: The things we find value in are to be considered, explored and savored—whether it’s lapping a powerful car on a racetrack or hunting down the perfect rosé to pair with that soufflé. The rest, as they say, is just noise.