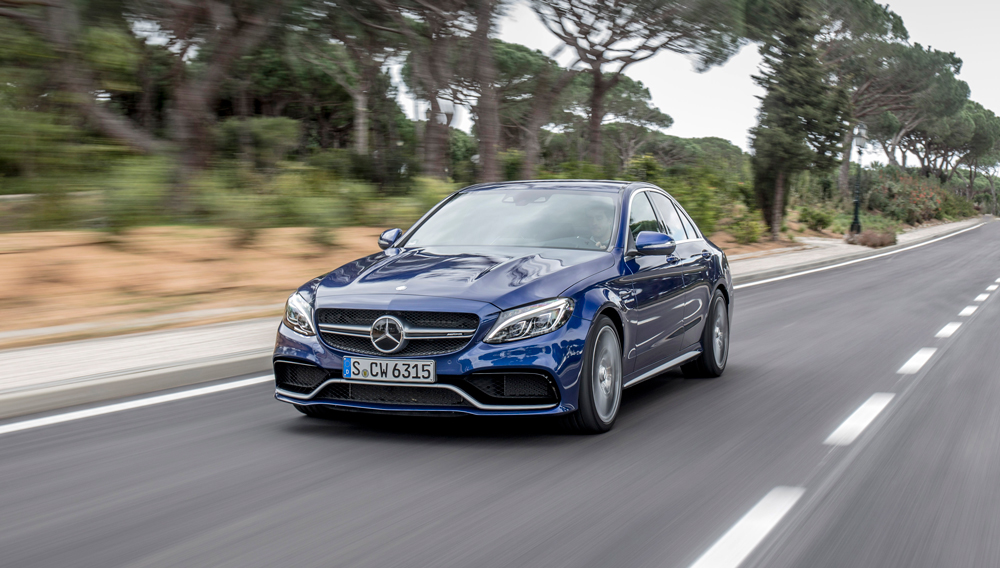 The introduction of the entry-level Mercedes-Benz CLA launched a new era for the C-Class. No longer at the bottom of the brand’s offerings, the C-Class enjoyed a dramatic redesign in 2014 that enabled it to more closely resemble a miniaturized S-Class; unfettered from its humble origins, it was free to evolve into a more luxurious, refined, and mature sedan.

The new 2015 Mercedes-AMG C63 takes this evolution a step further and embraces a more performance-oriented focus, starting with a twin-turbocharged 4-liter V-8—a modified version of the engine powering the new Mercedes-AMG GT. Available in standard (469 hp) and S (503 hp) variants, the engine is said to be the most fuel-efficient 8-cylinder in the high-performance segment. Considering this claim, the C63’s zero-to-60-mph time of 4 seconds (and the S’s 3.9-second sprint) makes this an exceptionally capable compact sedan. Also joining the C-Class family is the Mercedes-Benz C450 AMG, which is powered by a 3-liter twin-turbo V-6 that is capable of reaching 60 mph from a dead stop in 4.9 seconds.

At the Algarve International Circuit in Portimão, Portugal, the C63 S proved to be a dynamic, entertaining performer thanks to its prodigious power and dialed-in suspension. Despite numerous blind corners, elevation changes, and decreasing-radius turns, the C63 S felt tenaciously glued down with intuitive, reassuring handling. Unlike some all-wheel-drive AMG models (such as the E-Class), the rear-wheel-drive C-Class AMG is easier to steer with the right pedal, sliding the tail during heavy throttle application. That characteristic makes for a sportier, more exciting dynamic. The 6-piston ceramic brakes do an impressive, fade-free job of slowing down this 3,935-pound car, though Mercedes-Benz’s preemptive braking system intruded during lead/follow sessions when we followed the car ahead too closely. Suspecting the potential for impact, the system braked in order to maintain a safe distance.

On the roads surrounding the racetrack, the C63 S felt fierce, capable, and focused, delivering notable performance for its size and weight. As relatively small as its cabin may be, this impressively tuned, nicely finished AMG proves that wonderfully entertaining things can come in small packages. (mbusa.com)