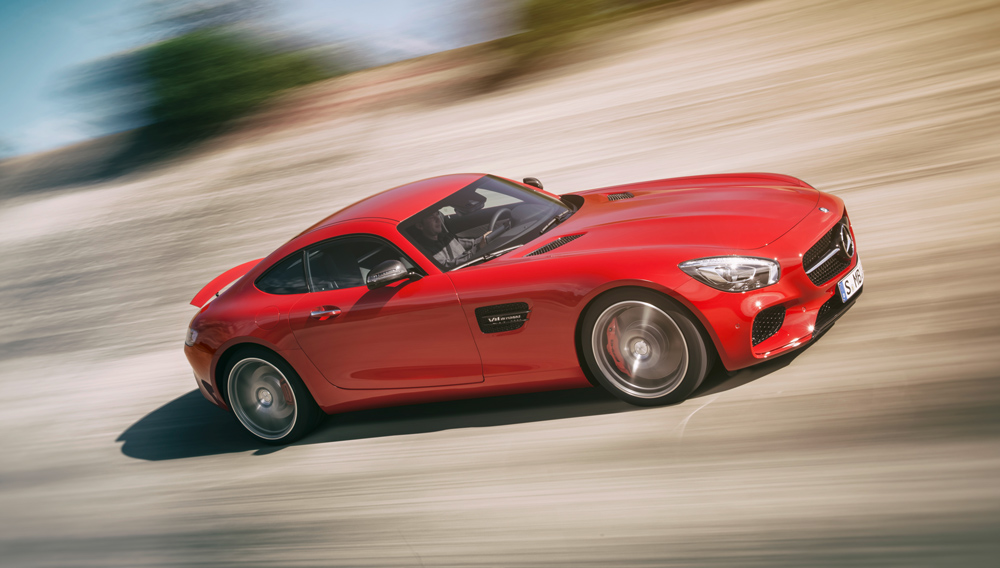 Following the brief but successful five-year run of the Mercedes-Benz SLS AMG, the German carmaker returns to the sports-car market with the new 2016 Mercedes-AMG GT S. Though more attainably priced than its predecessor—the new model is estimated to start at around $120,000 when it reaches U.S. shores in the spring—it remains a powerful performer.

Maneuvering through the 11 turns of the Mazda Raceway Laguna Seca reveals the GT S’s considerable mechanical grip, with intuitive steering feedback that encourages high entry speeds and enthusiastic throttle application, resulting in tail-wagging tire slides under heavy acceleration. Optional carbon-ceramic brakes are also strong enough to invite an enthusiastic driving style that involves late, heavy stabs of the left pedal, all of which lends the GT S a potent but manageable personality.

At first glance, the GT S appears to resemble Porsche’s evocative 911, with a longish nose and similarly sloping tail. But a slam of the GT S’s door reveals heftier, more substantial construction than that of the relatively compact 911. The GT S’s interior also feels dramatically different: With its wide stance, high doorsill, and surprisingly tall roofline, it seems expansive yet cozy, offering a well-finished and accommodating space for long drives. However, its relatively stiff seats make it less comfortable than it could be as the miles roll by, reflecting a more sporting focus than its “GT” moniker might suggest.

Tobias Moers, CEO of Mercedes-AMG GmbH, insists that “GT” isn’t short for “grand touring” at all, and his sentiment is reinforced by a day spent lapping the legendary Laguna Seca track nestled in the hills of Salinas, Calif. At the 2.2-mile circuit, the GT S feels fierce but balanced, its 503 hp twin-turbo V-8 and dual-clutch 7-speed transmission working harmoniously to produce dramatic acceleration and smooth gear changes. The car’s low, wide stance makes the driver feel in tune with the pavement below, and the engine’s front/mid mounting in combination with the rear-transaxle gearbox centers the GT S’s mass, making it easier to turn in corners.

At the end of the day, the Mercedes-AMG GT S works remarkably well on the racetrack despite its luxurious interior, signaling that the engineers behind this all-new two-seater have successfully set their sights on building a focused sports car that can challenge the most established benchmarks in the genre—no small feat for this new model from Affalterbach, Germany. (mbusa.com)