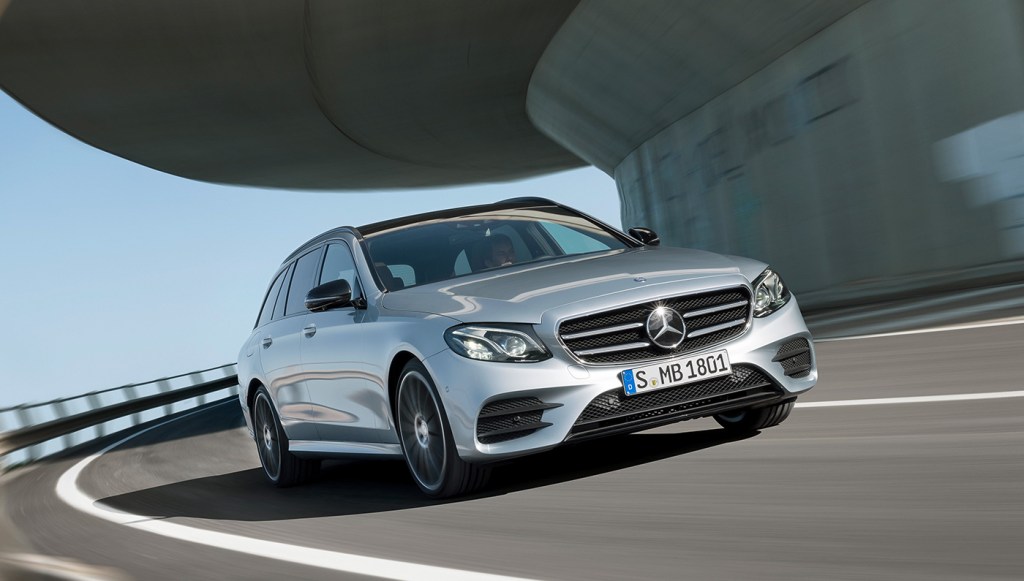 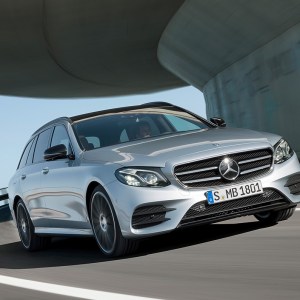 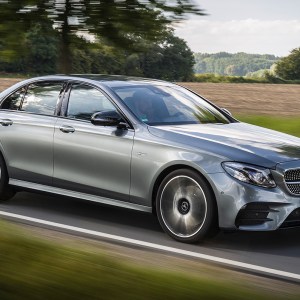 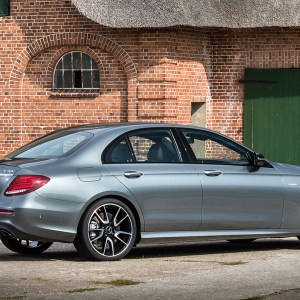 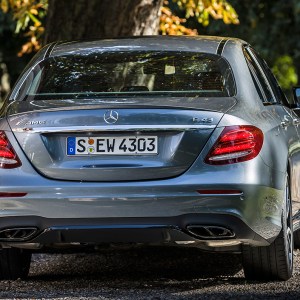 Following the launch of the fully redesigned E300 sedan earlier this spring, Mercedes-Benz has rolled out two more E-Class variants for the U.S. market: the E400 wagon and the AMG43 sedan (pricing yet to be announced). Both feature a new exterior design, an updated powertrain, and a reconfigured interior, as well as the suite of semi-autonomous driving features we experienced on the E300.

Our destination is Holstein, Switzerland—no, not that one. Comprising the area between Lübeck and Kiel on Germany’s Baltic coast, the incongruently named region takes its name from the Holsteinische Schweiz, a hotel built in 1885 that catered to northern Germans who sought the charm of Switzerland without embarking on a 600-mile journey south.

Departing from the port city of Hamburg, we wade through afternoon traffic in the AMG E43 (the only V-6-powered E-Class sedan destined for the United States) in search of greener—and quicker—pastures. The E43 is a compromise between the E300 and a full-blown AMG 63 (which has yet to be announced), with a 3.0-liter twin-turbocharged V-6 engine that produces 401 hp. Its signature diamond grille treatment, more aggressive front and rear ends, and chrome twin tailpipes make the car instantly recognizable as an AMG. Over roadwork and train tracks, the suspension is firm but compliant, what Michael Kelz, the director of development for the E-Class, calls “sporty comfortable.” Sport seats with contrast stitching cradle and support, while crisp, expansive displays in front of the driver and in the center stack make it easy to see where we were going.

On the motorway, acceleration is quick enough to fall into line with other hasty drivers with help from the quick-shifting, 9-speed automatic transmission. The gearbox has been revised with faster shift times and the ability to skip gears during downshifts for more speed, although we found it rather abrupt when driving hard in sport and sport-plus modes. Those who want more smoothness and control can shift via the paddles in manual mode.

Closer to the Baltic coast, we pull off the main highway and onto gently rolling roads that pass marsh grass and the spotted cows that are the namesake for the region. The E43 chassis equipped with 4MATIC all-wheel-drive is well composed, keeping us engaged all the way to the seashore.

The next day, we swap our keys for the E400 wagon, a perennial favorite of European families, American car nerds, and every legitimate automotive journalist. The prescribed route is the fast highway to the Hamburg airport, but since we are in the native land of marzipan, a side excursion is definitely in order.

Retracing our steps from the day before, we wind our way through the marshy, pastel landscape of the Baltic coast and head south toward Lübeck. The E400 wagon is a superb cruiser, with 329 hp and 354 ft lbs of torque produced by its 3.5-liter biturbo V-6 engine. Compared with the plucky AMG E43, the E400 wagon is mature and stately, with a broad, smooth power band and a stable ride thanks to its standard rear air suspension and 4MATIC all-wheel-drive.

Engineers worked hard to make the E-Class wagon quiet, a challenge for any vehicle that is open in back. “The goal we had was a comfortable ride with good acoustics,” Kelz says. When we turn onto the A1 motorway and put the throttle down on a stretch with no speed limit, it’s clear that goal was achieved. Aside from some wind noise coming from the A-pillar, the E400 wagon is quiet as we take it up to speeds pushing 140 mph.

Soon we turn off the highway and onto the city roads that lead into Lübeck, a UNESCO world heritage site whose town hall dates back to 1308.  A stop at Niederegger, Lubeck’s most famous maker of marzipan, allows us to test the wagon’s storage capacity. With up to 64 cubic feet of cargo space and rear seats that split 40-20-40, the E400 wagon is one of the most spacious and versatile vehicles of its size, accommodating our luggage and packages of chocolate-covered almond paste with plenty of room to spare.

Back on the road, we notice again the E400’s tasteful interior—inspired by that of the sedan—which wraps seamlessly from the front instrument panel into the doors. We have a particular penchant for the Designo treatment in Macchiato (a luxe ivory) and saddle brown. The layout strikes a fine balance between technology and craftsmanship, with electronic functions still anchored by hard buttons. “There still needs to be a human element,” interior designer Frederik Knothe tells us.

On our last stint, we note the multitude of wagons with us on the highway and lament their lack of popularity in the United States. After all, they offer the driving dynamics of a car with nearly as much space as an SUV. Still, those who understand the allure of an estate car, as well as those looking for a sportier sedan, will find fulfillment in the E400 wagon and AMG 43 alike—even when the steering wheel is smeared with marzipan. (mbusa.com)