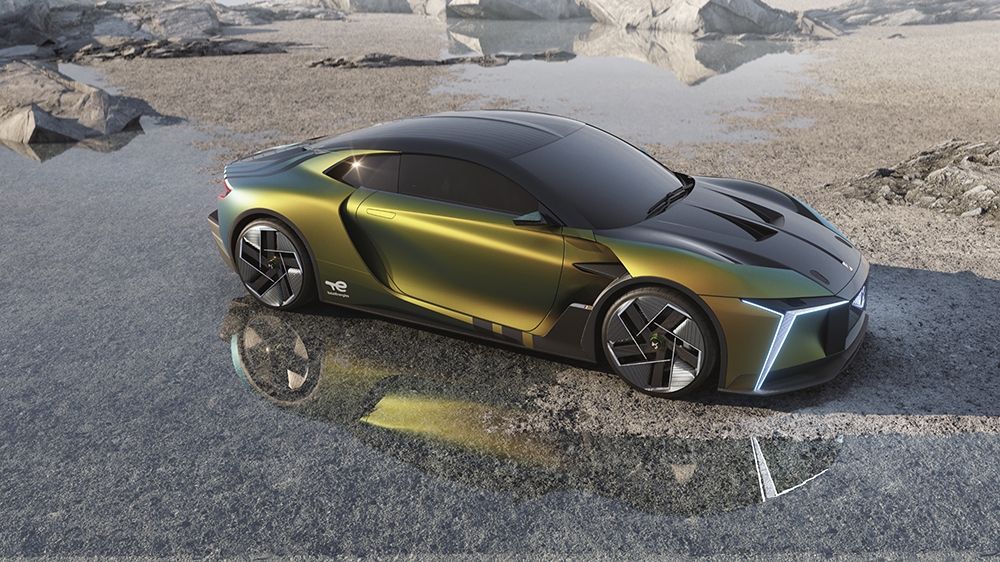 DS sees no reason why a race car has to look like a race car.

The marque, which is a subsidiary of Citroen, has just unveiled a new concept car called the E-Tense Performance. The EV isn’t just a stylish sports car, though, it’s actually the company’s Techeetah Formula E race car wrapped up in a gorgeous new body.

The E-Tense Performance may be built on the bones of a race car, but any discussion about the vehicle has to start with its design. The concept is easily one of the most striking concepts of the very young year. It looks similar to the E-Tense concept the brand brought to the Geneva Motor Show in 2016, with a few key changes. In front, the battery-powered speed machine now sports T-shaped LED headlights and the large chrome grille has been swapped out for a more compact black version topped with an illuminated, three-dimensional DS logo. There’s also a more dramatic aerodynamics package, which includes a carbon-fiber front splitter and side skirts, new wheels and a much larger rear diffuser. The most striking change, though, is the vehicle’s paint job. The car is now finished in an iridescent green broken up by a large black racing stripe.

DS’s concept mixes style and substance, so there’s a lot to be intrigued by underneath the car’s gorgeous exterior. At the heart of its carbon-fiber monocoque chassis is a fully electric powertrain just like the one featured in the Techeetha Formula E racer. It includes two electric motors—one positioned on each axle delivering power to each wheel—that combine to churn out an impressive 815 horses and 590 ft lbs of twist. Thanks to this, the brand expects its speed machine to rocket from zero to 62 mph in around two seconds. Not bad.

Unfortunately, there seems to be no plans to put the DS E-Tense Performance into production. At least for now. The vehicle will be tested by DS’s two Formula E championship-winning drivers, Jean-Éric Vergne and Antonio Felix da Costa, in the coming months, according to Car and Driver.

Let’s hope the brand sees something that changes its mind.

Check out more photos of the E-Tense Peformance below: