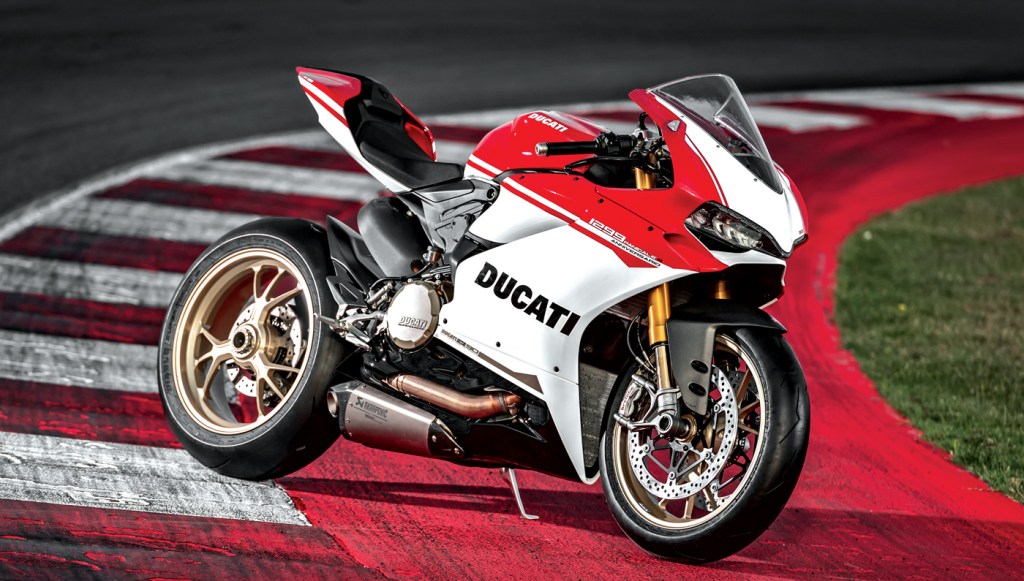 An exquisite new superbike, the Ducati 1299 Panigale S Anniversario (ducati.com) was introduced earlier this year to mark the brand’s 90th anniversary. It’s a special edition of the 1299 Panigale S and features the same aluminum monocoque chassis and 1,285 cc L-twin engine, as well as all-new supersophisticated electronic controls. Ducati plans to build only 500 examples, each priced at just under $29,000.

The new traction- and wheelie-control systems use rewritten algorithms to improve upon the cornering performance and acceleration of the Panigale S, and a revised chassis geometry gives the Anniversario a racing-bike stance similar to that of the Panigale R. A lithium-ion battery (instead of the traditional lead-acid type), carbon-fiber rear mudguard, and titanium exhaust help keep the bike’s weight to just 362 pounds, which is 5.5 pounds lighter than the Panigale S.

In addition to these exclusive features, the Anniversario comes with gold-colored magnesium-alloy wheels and engine covers. The fairings display a red-white-and-black color scheme accented with gold lettering that proclaims, “Ninety years of passion and performance.”

Ducati may be 90 years old, but its involvement with motor-cycles didn’t begin until the late 1940s, when it started building and selling the Cucciolo (Italian for “puppy”), a 98-pound vehicle powered by a 48 cc power plant that produced a top speed of 37 mph. The Cucciolo was essentially a bicycle with a small engine attached to it. Before that, the company was associated mainly with radios and radio equipment.

The Brothers Adriano, Marcello, and Bruno Ducati opened their manufacturing company, Società Scientifica Radio Brevetti Ducati, in 1926 and began producing Manens (Latin for “steady”) condensers, which were exported to dozens of countries. Other condensers and components followed. By the mid-1930s, the company was also making cash registers, electric shavers, cameras, and camera lenses. After World War II, during which the company’s factories in Borgo Panigale were destroyed, the Ducati brothers re-established their business with the first Cucciolo model and the larger and more powerful versions that soon followed.

In November, the company will introduce its latest motorcycle model. It provided a no-cameras preview of the bike in July during World Ducati Week, the biennial 3-day celebration of all things Ducati that was held in Misano, Italy. Called the Supersport S, it’s built around a trellis frame and 937 cc V-twin. It has higher handlebars and softer suspension settings than the Panigale models, and the model in Misano featured matte-white bodywork, a black engine, and bright-red wheels. Ducati has not yet announced a price.