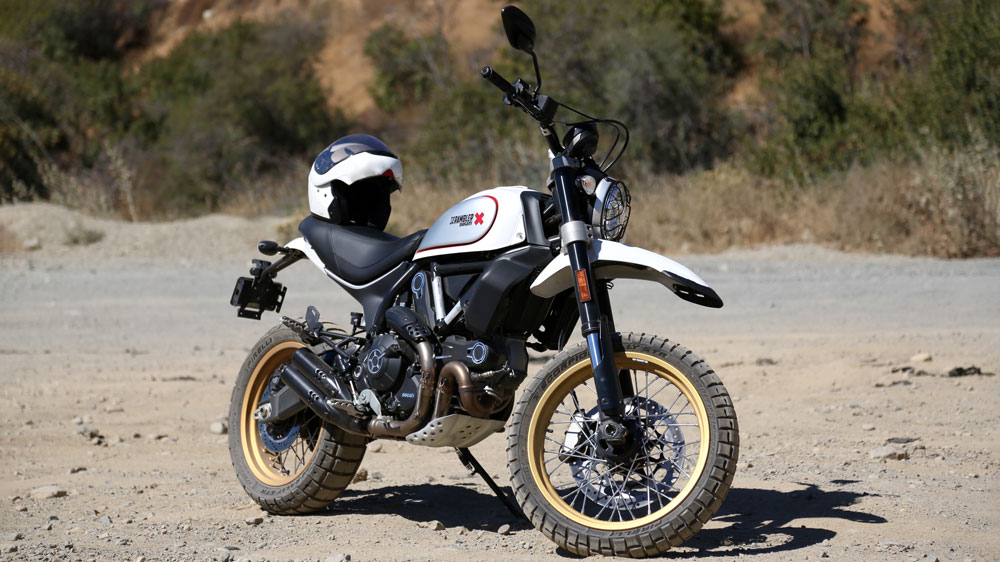 The open road is a motorcyclist’s domain; no one appreciates the freedom more whole-heartedly. Convertibles permit light and air to tickle our senses, and supercars blur the surrounding world at ferocious speeds, but only a ride on a bike delivers pure, unfiltered fun.

Today, manufacturers of both dirt and street motorcycles largely dominate the dual-sport segment, but that hasn’t discouraged Ducati from entering its own candidate. Inspired by the California desert riders of the 1960s and 70s, the Ducati Scrambler Desert Sled is a modern adventure bike with a classic soul.

Sharing its 803 cc L-Twin engine with the road-going Scrambler, the Desert Sled churns up 75 hp and 50 ft lbs of torque. Changes from the standard Scrambler include frame and swingarm reinforcement that improves stiffness and reduce engine load, taller bars for a more upright riding position, a fully adjustable Kayaba front fork and shock for greater suspension travel and durability, and a set of Pirelli Scorpion Rally STR tires for improved off-road traction.

As luck would have it, the Ducati picked Robb Report’s own backyard to show of the Desert Sled. Southern California’s desert offers a perfect mix of loose gravel and packed dirt covering both flat and hilly topography—ideal conditions to put the Desert Sled to the test. With temperatures cresting 100-degrees, both rider and motorcycle must endure punishment. Fortunately, the reward is well worth the trial.

First to stand out is the Scrambler’s updated suspension. Firm yet remarkably stable, the new fork and shock plow through choppy gravel, loose rocks, and large dips without any drama. A well-cushioned seat does its best to absorb the stiffer frame’s punishment, but I find a standing position to be the most comfortable over harsh surfaces. Brembo front and rear brakes aren’t just for on-road support; on the trail, stopping power inspires confidence to maintain momentum along obscured paths.

While tuned more for tarmac duty, the L-twin engine offers plenty of low-end torque to hustle up steep dirt hills or kick the rear wheel in a controlled slide. Despite weighing 46 pounds more than the Scrambler street bike, the Desert Sled feels light and agile once in motion. We tend to avoid hybrid tires on automobiles, but Pirelli’s STR rubber offers ample grip over loose surfaces without sacrificing on-road comfort.

Finally sapped of energy and more than satisfied with the Desert Sled’s off-road grit, we rejoin paved roads for the journey home. As if shedding its rugged skin, the Ducati instantly morphs into a compliant cruiser. Sure, there are faster road bikes and more capable dirt bikes, but what the Ducati Scrambler Desert Sled gives up on the fringes, it makes up for in freedom.