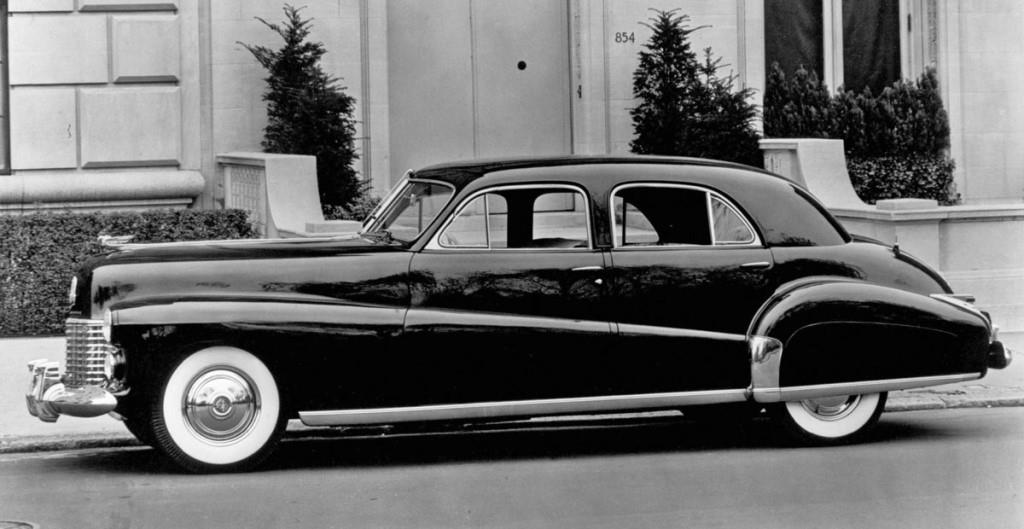 One of the most famous and iconic cars of both American and English society, a 1941 Cadillac Custom Limousine that was designed for the Duke and Duchess of Windsor, will be offered at RM Auctions and Sotheby’s exclusive Art of the Automobile sale, November 21, in New York City. Affectionately known as “The Duchess,” the Cadillac was a bespoke order to provide the Duke and Duchess of Windsor with luxury transportation during their periods of residence in New York, and it is a car that became a regular feature in press images and newsreels of the time.

This stunning automobile is one of the most famous Cadillacs ever produced, and it exudes an air of luxury and exclusivity, befitting of its original owners and their tastes. The Cadillac is understated and decidedly European in its elegance, from the limited use of chrome to the Windsor “W.E.” monogram and crown on the door. This streamlined styling by the designers at General Motors, then under the purview of the legendary Harley Earl and on a direct order from GM Chairman and CEO Alfred P. Sloan, would foreshadow American and English designs of years to come.

The story of King Edward Vlll and his abdication from the British throne is one of the most fascinating and enduring of all love stories, and it was an episode that rocked the British constitution and society at the time. The King publicly announced, “You must believe me when I tell you, that I have found it impossible to carry the heavy burden of responsibility, and to discharge my duties as King, as I would wish to do, without the help and support of the woman I love.” The King’s love for American socialite Wallis Simpson would become one of the most famous romances of all time, and the abdication heralded the beginning of what was to become nearly a 40 year international jet-set existence for the newly named Duke and Duchess of Windsor.

The couple spent much of their time in New York, living in a suite at the Waldorf Towers on Park Avenue, and for 11 years, their beloved Cadillac, “The Duchess,” was with them. According to records, the Duke of Windsor paid an astonishing $14,000 for the masterwork of Art Deco design, an extravagant sum in 1941.

No single body panel on the Windsors’ car matched any other 1941 Cadillac. The hood, trunk, fenders, fender skirts, roof, and doors were all crafted by hand, and all of the interior appointments were hand-fitted. Inside, the car was upholstered entirely in rose-colored custom broadcloth, extending even to the headlining and sun visors. The floors were covered in Wilton wool carpet, custom-dyed to match and set against custom walnut finishes for the doors, cabinetry, and divider window. It was one of the first two Cadillacs to be equipped with power windows (the other being Alfred P. Sloan’s personal car). They were fitted with satin privacy curtains that would roll away when not in use.

Additional special fixtures included four brushed stainless-steel jewelry cases, each lined in velvet, to carry the Duchess’ famous jewelry purchases and, for the Duke, no fewer than three cigar lighters and two ashtrays, along with a humidor and custom rack for his favored Sasieni pipes. As the Duke was a well-known enthusiast of automobiles, it was expected that he would take the wheel of the car on occasion. As a result, unusually for a limousine at the time, the front compartment was detailed to be as elegant and opulent as the rear, including its own radio, with a manually controlled roof-mounted antennae and buttons preset to New York City AM stations of the era.

Alain Squindo, Vice President, RM Auctions, says, “This Cadillac is an exceptionally important part of both automotive and social history, and it is particularly appropriate that the car should be offered for sale in New York, the city to which it was delivered new and in which it has not been seen in many years. From front to back and throughout the entire interior, it is a design statement unlike any other to come from Detroit in those years.”

Leslie Keno, Senior International Specialist from Sotheby’s, adds, “Much like the record-setting emerald-eyed panther bracelet sold at the final Sotheby’s auction of the Duke and Duchess’ collections, this Cadillac is the pinnacle of design. It is emblematic not only of the grace and elegance that characterized the couple, but it is a truly bespoke piece, befitting its regal owners.”

“The Duchess” comes to auction in outstanding, restored condition, and it is accompanied by copies of original historic photography from General Motors, press clippings, and newsreels of the era featuring the Windsors’ with their beloved Cadillac. Further confirming the car’s royal provenance is a copy of the 1952 New York State title, bearing the Duke’s signature, address at the Waldorf, and the car’s serial number. It is estimated to fetch between $500,000 and $800,000 when it goes under the gavel next month.

Proudly presented by RM Auctions and Sotheby’s, ‘Art of the Automobile’ is the first major collector car auction to be held in Manhattan in over a decade. With an emphasis on bespoke design and best of category examples from the world’s most admired automotive marques, the sale will feature one of the most significant collections of motor cars offered in auction history. In total, some 30 automobiles will go under the gavel at the November 21 auction. As a prelude to the sale, an extraordinary exhibition that showcases the vehicles on offer will be held from November 18–20 on the 10th floor galleries at Sotheby’s New York—a setting customarily reserved for the display of world-class works of art offered at Sotheby’s. For further information, visit www.rmauctions.com.

RM Auctions is the world’s largest auction house for investment-quality automobiles. With over three decades of experience in the collector car industry, RM’s vertically integrated range of services, from restoration to private treaty sales, auctions, estate planning, and financial services, coupled with an expert team of international car specialists at seven offices around the world, provide an unsurpassed level of service to the global collector car market. RM proudly holds five of the top ten all-time records for the most expensive motor cars sold at auction. RM’s restoration division has achieved unprecedented accolades, earning Best of Show honors at the world’s top concours events, including the prestigious Amelia Island and Pebble Beach Concours d’Elegance. For further information, visit rmauctions.com, find us on Facebook, or follow us on Twitter @rmauctions.

Sotheby’s has been uniting collectors with world‐class works of art since 1744. Sotheby’s became the first international auction house when it expanded from London to New York (1955), the first to conduct sales in Hong Kong (1973) and France (2001), and the first international fine art auction house in China (2012). Today, Sotheby’s presents auctions in eight different salesrooms, including New York, London, Hong Kong and Paris, and Sotheby’s BidNow program allows visitors to view all auctions live online and place bids in real‐time from anywhere in the world. Sotheby’s offers collectors the resources of Sotheby’s Financial Services, the world’s only full‐service art financing company, as well as private sale opportunities in more than 70 categories, including S|2, the gallery arm of Sotheby’s Contemporary Art department, as well as Sotheby’s Diamonds and Sotheby’s Wine. Sotheby’s has a global network of 90 offices in 40 countries and is the oldest company listed on the New York Stock Exchange (BID).