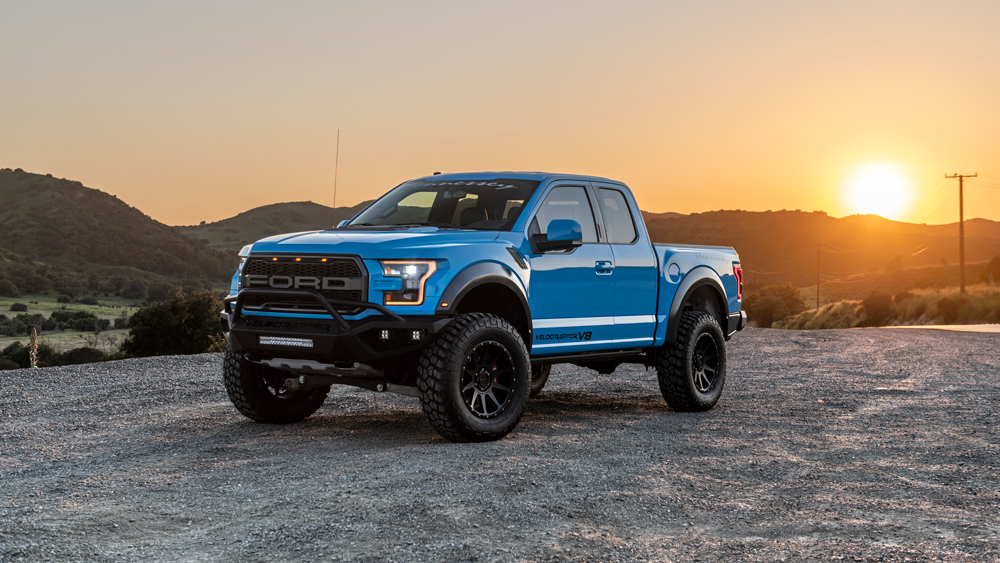 Dwayne “The Rock” Johnson allegedly has a net worth of more than a quarter-billion, but we can all agree the guy’s rich enough to be rolling around Hollywood with a fleet of exotic Italian and German supercars—or hypercars. So what’s The Fast and the Furious star’s daily driver? A Ford F-150 Raptor. A man after our own hearts.

But no, contrary to recent news reports, he did not just pick up another one, a VelociRaptor that’s been engine-swapped by Hennessey Performance to drop a V-8 packing 758 stallions (570HP to the wheels). According to the Hennessey Performance marketing folks, “The Rock didn’t buy the VelociRaptor. It was brought to Paramount Studios last week for him to consider using on the Rock’s HBO show Ballers. All we said on Instagram was that we hope he likes it.”

Should he feature it, the former WWE star will be getting a heck of a truck. Hennessey Performance Engineering has been tweaking the already range-topping Ford Raptor since just after Ford bestowed us with the Baja-smashing twin-turbo 3.5-liter V-6 beast, packing 450 horsepower. Hennessey will sell you a 600-horsepower iteration, and it’ll happily tack another axle on the back (a 6×6 that Post Malone recently purchased), or you can opt for the big guns and bench that engine in favor of a 5.0-liter Coyota V-8 with a huge honking supercharger. Running seven pounds of boost through the blower, that set-up makes 758HP at the crank, and translates 557 horsepower and 449 lb-ft of twist to the wheels.

That mill is mated to Ford’s highly capable 10-speed automatic transmission, and the whole package has been tuned by Hennessey’s crew. A lift kit will help to accommodate both the giant actor and those handsome beadlock wheels. A matte black bull bar and auxiliary LED bumper lights complete the exterior look, which pairs perfectly with that bright blue paint hue.

It looks great (even better than from the factory), it sounds utterly fantastic (check out the deep and throaty exhaust during the drag race below), and most importantly: it’s fast as hell. The snarl to 60 takes 4.1 seconds, which is a full second faster than the stock Raptor. The total cost? About $150,000, or 1/100th of the Rock’s endorsement deal with Ford as a spokesperson.