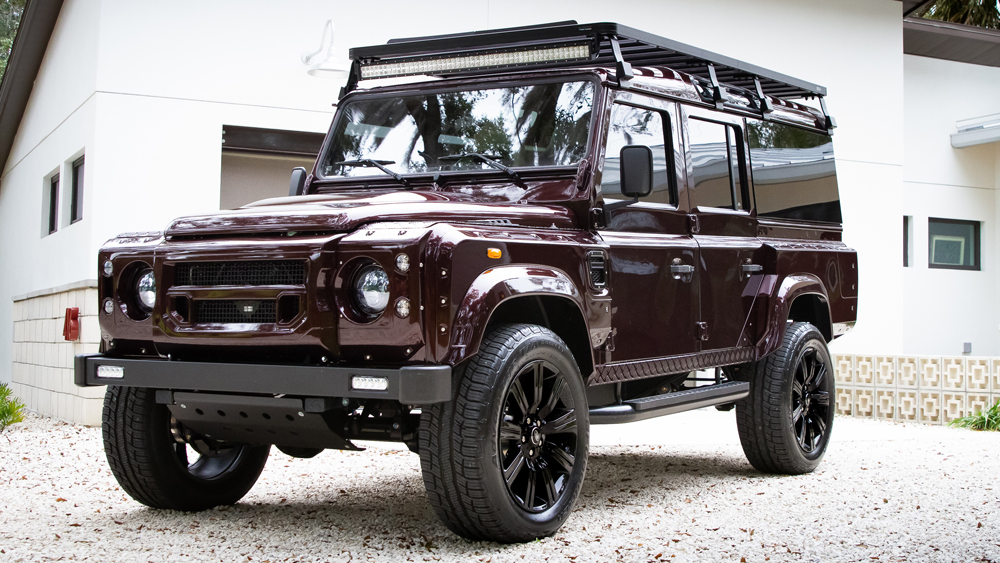 Since opening its doors in 2013, E.C.D. Automotive Design has created more than 60 custom-built Defenders. It’s an obvious niche, since E.C.D. stands for East Coast Defender, and the Florida firm’s three cofounders grew up in central England, only 40 miles from the factory that produced Land Rover Defenders during the 1980s. All of E.C.D. Automotive’s vehicles are eye-catching in their own way, yet the specialty builder’s most recent production, a Rosello Red beauty titled “Project Camper” is perhaps the most persuasive to date.

Built without a roll cage and powered by an upgraded 6.2-liter LS3 V-8 that churns out 565 hp, this Defender defies expectations. It may have the look of a bruising, big-bodied heavyweight—as all Defenders naturally do—but Project Camper’s power-to-weight ratio gives it stealthy, welterweight speed. “No matter how fast a Defender can go, it always looks slow,” says cofounder Tom Humble. “This vehicle will make people realize that they don’t have to make sacrifices to be in a Defender. This truck is fast. It’s really fast.”

Humble estimates that Project Camper can sprint from zero to 60 mph in about 6 seconds, which is about 8 seconds faster than a classic Defender outfitted with a diesel engine. “In that amount of time, in this vehicle,” he says, “You could drive to 60 mph, stop, and then do it again.”

Project Camper sprints from zero to 60 mph about 8 seconds faster than a classic Defender.  Photo: Courtesy of E.C.D. Automotive Design.

As evidenced by that pin-your-head-against-the-seat acceleration, this specialty Defender is one of the quickest vehicles that E.C.D. has built. But that only partially characterizes the vehicle’s persuasive capabilities. Inside, Project Camper is outfitted with heated and ventilated Corbeau Trailcat seats adorned with ivory-white leather, which stand out against the vehicle’s black suede headliner; and the SUV is equipped with an Alpine infotainment system (upgraded with Apple CarPlay) that is connected to a JL Audio–amplified sound system.

Those details elevate this Defender to a level that the model typically doesn’t reach. “The fit and finish is like being in a G Wagon,” Humble says. “It’s not jacked up and lifted with off-road accessories all over it. It’s the kind of truck that’s pushing people into thinking that they could have one of these and enjoy it and drive it every day. It’s just not what you expect a Defender to be.”

For that reason, Humble knows it’s not a vehicle for everyone. “[Land Rover] enthusiasts would probably hate this vehicle,” he says with a chuckle. In fact, he describes all of his company’s Defenders in a quintessential British way, comparing them to Marmite, a British food spread that generates polarizing opinions. “That’s the beauty of what we do,” he explains. “People either love it or they hate it. It’s Marmite.”