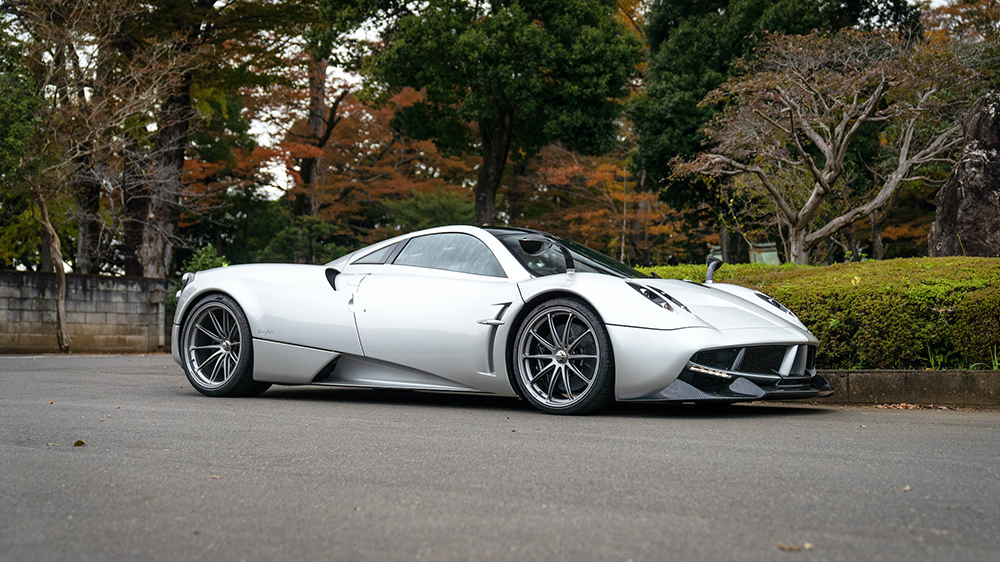 With less than 300 ever built, it’s rare to see a Pagani Huayra or one of its variants hit the market. Fortunately for those of us still scrambling to find gifts this holiday season, one just went up for grabs.

An example from the hypercar’s first year of production is currently up for bid on online auction platform Collecting Cars. This isn’t just one of the first Huayras, though. It’s also been upgraded with the Pacchetto Tempesta performance package, making it even more capable than when it rolled off the line.

The Huayra was first announced at the beginning of 2011, and made its official debut at that year’s Geneva Motors Show. It is the successor to the Italian marque’s first model, the Zonda, and is named after the Incan god of wind, Huayra-tata. It’s also a true hypercar with a futuristic design, gull-wing doors and a Mercedes-AMG-sourced powertrain.

The coupé is part of the initial 100-car production run, all of which were built between 2011 and 2018. Its flamboyant body is finished in metallic silver, only broken up by a carbon-fiber front splitter, side view mirrors and rear panel and diffuser. Open up its doors and you’ll find a luxe cabin covered in black leather with white contrast stitching offset by more carbon fiber. Like other hypercars it’s not particularly spacious, but there is a matching luggage storage area hidden beneath its rear clamshell.

Powering the Huayra is a twin-turbocharged, 6.0-liter V-12. Mated to a seven-speed Xtrac automated manual transmission that sends power to the rear wheels, the mill is capable of churning out a thrilling 740 horses, according to the auction listing. While any Huayra is special, this one was upgraded with the Pacchetto Tempesta (which translates to Storm Pack) performance package in 2016, which improved airflow and created more downforce. Other upgrades include four-way adjustable Ohlins shock absorbers, a bespoke titanium exhaust system and new forged aero-grade wheels in the front and back. The car has also been used sparingly over the last decade, and has just 2,194 miles on the odometer.

If you’ve ever wanted to add a Huayra to your collection, you have until Wednesday to put in a bid for this one. Bidding is currently up to $1.98 million, which is more than the $1.3 million the vehicle cost originally, but less than the $2.4 million Huayras with the Pacchetto Tempesta package have been known to go for. It’s almost a bargain. Relatively speaking, of course.

Check out more photos of the Pagani Huayra – Pacchetto Tempesta below: