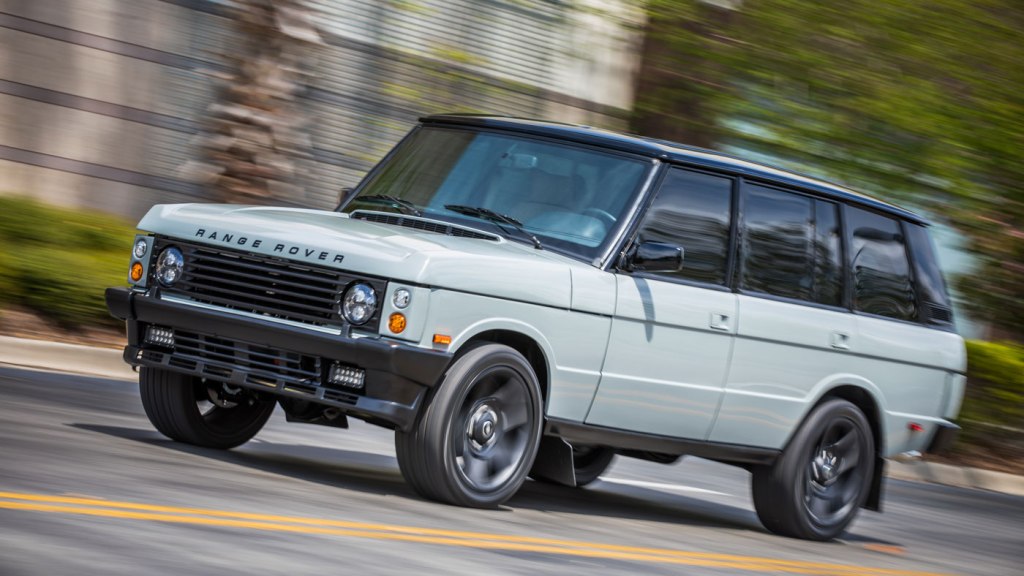 The old-school Land Rover Defender oozed enough rugged swagger to inspire the formation of East Coast Defender (ECD) in 2013, a Florida-based firm that focuses exclusively on the restoration and modification of the stalwart British off-roader. Riding the crest of cultish fascination around the venerable Defender, ECD transformed its operation from a tiny upstart into a 30,000-square-foot facility populated by 42 ASE-certified mechanics. In the process, it renamed itself ECD Automotive Design.

The company’s tricked-out Defenders have earned notoriety by embellishing the stripped-down sport utes with plush interiors and muscular power plants. However, the company’s newest model, internally dubbed Project Alpha, departs from the utilitarian theme by building upon the aspirational luxury of the Range Rover Classic, a pre-millennial SUV that is more likely to be found cruising posh boulevards than clawing its way through hill and dale.

No stone is left unturned inside or out of the 2.5-ton SUV, including the reworked cabin, which is reupholstered in Spinneybeck leather, a suede headliner, and a custom fabricated dashboard housing. Though steering wheel and passenger airbags remain stock in the interest of safety, virtually every other surface has been improved. Available trim inserts include ash, piano black, carbon fiber, or a restoration of the donor car’s original wood.

My tester car started life as what many enthusiasts consider a peak ’90s-era Range Rover: a combination of the long wheelbase configuration with the so-called soft dashboard setup. Finished in a glossy hue that might be recognized as Audi’s Nardo Grey, the Rover takes on a subtler, more nuanced look that sets the tone for the car’s reworked personality. Despite the modernizations, however, the essential architecture remains. It takes a bit of adjustment to adapt to Range Rover’s curious 1990s ergonomics; for instance, splaying your leg while attempting to close the door will keep it from properly shutting because, despite the Classic’s considerable footprint, the front seats are packaged around a wide transmission tunnel.

But the benefits of modernization are readily apparent behind the wheel. The Pinnacle, alleviated of its notoriously problematic air suspension and replaced with a conventional coilover setup, glides through Los Angeles traffic with ease. The view from the Range Rover Classic is commanding, with a high-seated stance that offers letterboxed views through large expanses of flat-paned glass. Additional soundproofing involves 180 pounds of noise-deadening materials—and it shows. The muted hum of the 430 hp V-8 is the primary acoustic feature as I accelerate onto San Vicente Boulevard, a wide-laned thoroughfare that links L.A.’s suburb of Brentwood to beachside Santa Monica. Any added mass is ameliorated by the torque-y engine, which produces 424 ft lbs of twist that whisks the big, boxy brute ahead, despite its brick-like aerodynamics.

The cabin accoutrements include reupholstered Spinneybeck leather and a suede headliner.  Photo by Basem Wasef.

The power is refreshing in a vehicle of this vintage, offering an element of usability that invites daily driving. My only quibble with the drivetrain was the perception of some lash—that is, a slight harshness at throttle tip-in—and a few rougher-than-expected downshifts at low speeds. When I asked about the anomalies, I was told that the drivetrain utilizes a Defender-sourced transfer case that makes it capable of more hardcore off-roading. A rear-wheel-drive option (sans transfer case) is available, though it does stray from Range Rover’s go-anywhere and drive-over-everything ethos.

While I appeared to be driving a pristinely restored Clinton-era Range Rover, ECD’s muscle-car motor and updated interior are like a retro-modern indulgence amidst a sea of homogenized contemporary cars. It’s certainly not for everyone, but Range Rover aficionados who crave a taste of the past—without abandoning the convenience of modernity—will find ECD’s new Range Rover Classic a discreetly satisfying way to break away from the sport ute status quo.

The ECD Range Rover Classic is priced starting at $150,000 (including donor vehicle) and requires a nine-month turnaround time.