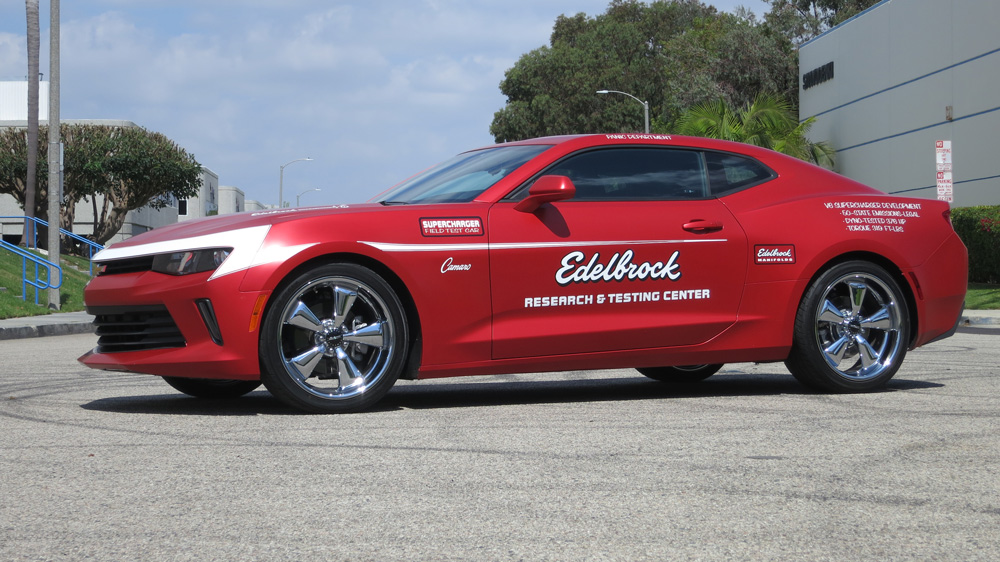 Its zeitgeist was captured in the film American Graffiti, a subculture of motorsport’s Golden Age defined by youth wanting to live at full throttle but running on fumes financially. Building automotive muscle on a budget became an art form displayed at drag strips throughout the country, and it was made possible by the help of aftermarket pioneers like the Edelbrock family.

From Vic Edelbrock Sr.’s innovative Slingshot manifold in 1938 to his son Vic Jr.’s expansion into carburetors, camshaft kits, exhaust systems and other performance-enhancing componentry, the company—based in Torrance, Calif.—continues to offer more economical power to already brawny models from the likes of Ford, Dodge and Chevrolet. It’s a legacy that comes to life for me while gripping the wheel of Edelbrock’s bolstered Chevy Camaro.

The Edelbrock story, an important chapter in the automotive aftermarket’s history.  Photo: Courtesy of Edelbrock, LLC.

When the Camaro, developed as Chevrolet’s answer to the Ford Mustang, first rolled to market in 1966, it came with the choice of six-cylinder or eight-cylinder engine configurations. Multiple power-train options have remained a calling card of the Camaro down through the current sixth generation.

Now, Edelbrock’s V-6 Camaro Supercharger—priced starting at $4,725 and developed for model years 2016 through 2019—boosts the factory version’s 3.6-liter V-6 by an additional 100 hp and 86 ft lbs of torque, which represents a 36 percent increase in horsepower at the wheels. The math adds up to a V-6 model that seems to best its stock V-8 sibling across the board.

“As to the benefits over a V-8 Camaro, the power-to-weight ratio is huge, as the V-6 is a lighter car, so it’s more nimble,” explains Don Barry, Edelbrock’s CEO. “It recalls the early Pontiac Firebird Trans Am.”

On Southern California’s Pacific Coast Highway and 405 Freeway, I’m given little to go on as far as the efficacy of the tuning package, but, then, nobody supercharges a Camaro for commuting. However, the stock throttle response hints at much more in store, letting loose a teasing rumble and kick every time I launch into the passing lane to gain 50 yards before the next set of brake lights.

It’s not until reaching one of the main canyon roads in Malibu that the souped-up six-cylinder really comes alive. The vehicle maintains the gravitas expected from a muscle car without the bulk, which affords greater agility—especially considering the 390 ft lbs of torque available at the rear wheels. And the bolt-on system, with an Eaton R1740 rotor assembly and built-in bypass valve, air-to-water intercooler, and front-mount heat exchanger, all work to bolster the power train’s punch without fuel efficiency taking a hit.

“Our research showed that, much like hot rodders in the late 1940s and early 50s, younger buyers are interested in performance, but lack the money to buy a new V-8 car,” says Barry. “We also know that the Camaro is a desired body style, so we coupled its V-6 foundation with an affordable supercharger to provide more power than a stock V-8 Camaro, at a fraction of the overall price.”

The end result is a surprising contender in its muscular class. And while it’s obviously no Porsche 911 or McLaren GT through the turns, it’s not supposed to be; just like those early aftermarket builds racing down Main Street weren’t made for the Mille Miglia. It’s a pumped-up pony for aspirationals—and that’s a market segment the industry needs to welcome more than ever.