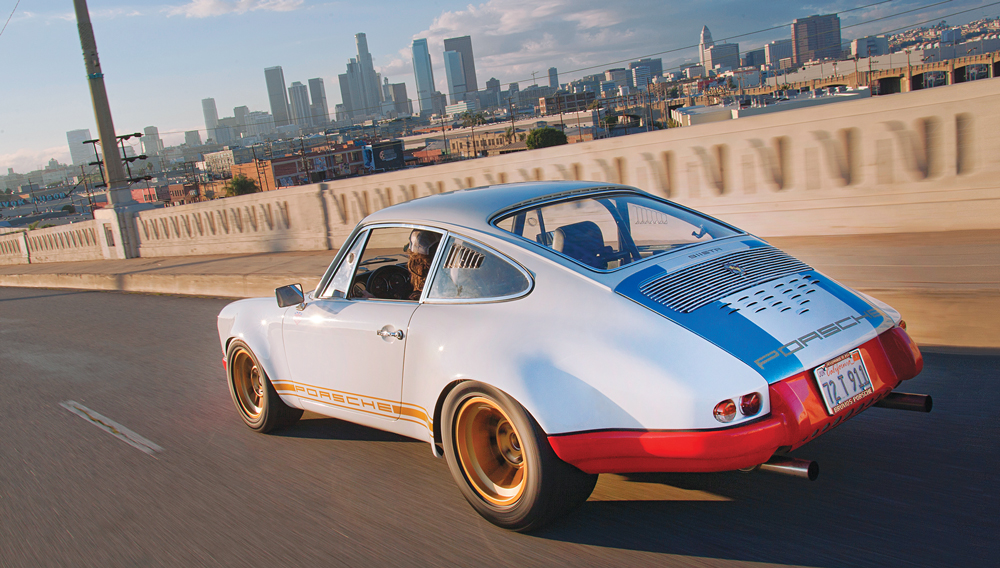 There may be no car collectors more fanatical than Porsche collectors. And together they form the world’s largest auto-enthusiast group, the Porsche Club of America, a 115,000-members-strong organization largely devoted to factory-level perfection. “I’m not that guy,” says Magnus Walker, a talented Porsche restorer and master of understatement. “I build cars to please myself.”

Walker, a 47-year-old Brit who has lived in Los Angeles for the better part of three decades, starts with 911s from the late ’60s and early ’70s and creates ripping pieces of artwork that are part hot rod, part racecar, and part European classic. His signature touches include modish integrated rear turn lights, louvered engine covers, hole-punched chrome door handles, aggressively lowered bodies and wide wheels, and retro-inspired paint jobs. Walker builds 911s to drive—on track days, but particularly on the undulating canyon roads that surround Los Angeles. “I’m taking my favorite bits from these cars and adding soul, personality, patina,” he says. “I build cars to be driven and to have fun with rather than to be rolled onto a golfing green to be judged by a group of people looking for imperfections.”

And yet, Walker’s outlaw tendencies are gaining favor among some of those Porsche purists. When Road & Track celebrated the 50th anniversary of the 911, it was Walker’s 1972 911 STR II on the cover of the magazine, not a perfectly restored specimen or a Le Mans–winning piece of history. In the last couple of years, Walker (in his full dreadlocked, tattooed, rock-and-roll regalia) has been featured on Fifth Gear and Jay Leno’s Garage. And one of his cars has indeed graced the golfing green at Pebble Beach.

That car—the ’72 STR II cover car, the one he calls “my crowning glory, I guess”—was the first Magnus Walker Porsche sold at auction. It fetched $302,500 in Gooding & Co.’s 2013 Pebble Beach sale, more than double its high estimate. And the buyer? None other than Bob Ingram, the renowned Porsche collector and the subject of this month’s cover story (“Turbo Props”). That muscular 911 is the only non-factory restoration in Ingram’s classic collection, Walker proudly points out, “and the great thing is, the Ingrams drive them.”

That’s Walker behind the wheel of the STR II, shortly before he sold it. In all, he has done full restorations or cosmetic makeovers on 40 911s, and he still has 20 of them in his downtown L.A. garage, including one from each year from 1964 to 1973. “They represent the glory years,” he says. “Plus my tweaks.”

In this video, Walker discusses his passion for Porsche and 40 years of the Turbo…