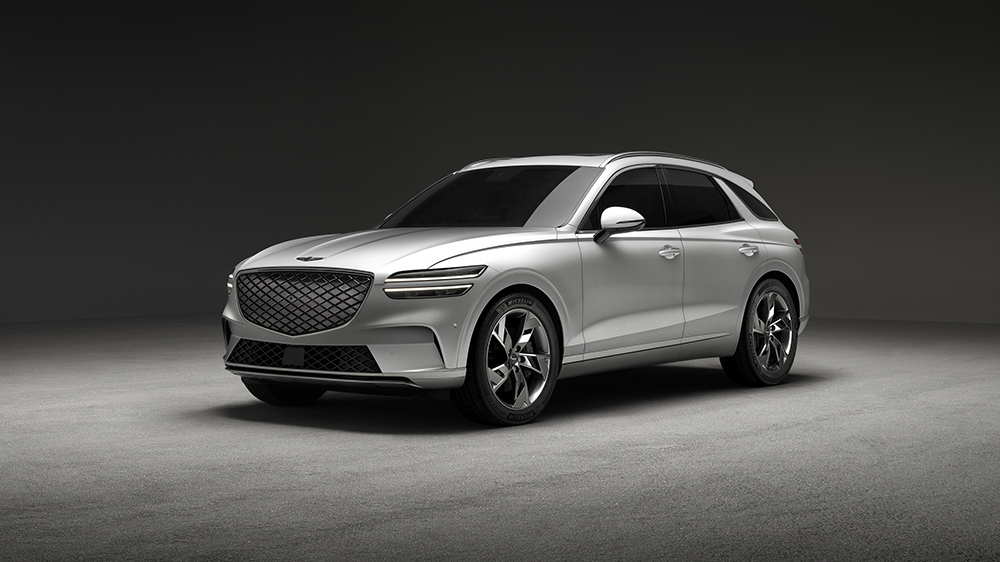 Genesis’s lineup of electric vehicles is expanding at a rapid clip.

The South Korean luxury marque unveiled its latest EV, the electrified GV70, at Auto Guangzhou 2021 on Friday. And just like the Electrified G80 sedan before it, the new zero emission model looks almost identical to the gas-powered crossover SUV it’s based on.

It may be hard to tell the two GV70 siblings apart, but there are a couple key superficial differences. They start up front, where the EV’s version of the brand’s trademark wide-mouth crest grille features a closed-off design. It’s still topped by the same intricate lattice work found on the internal combustion engine (ICE) model, but here that design flourish is used to hide the EV’s charging port. The other big difference is in the back, where the lack of exhaust tips results in a much cleaner rear bumper. One area where there are no changes is the interior. It appears to have been left completely untouched, including its widescreen infotainment system.

Unlike the GV60 EV the brand unveiled this summer, the Electrified GV70 won’t be built on its own unique electrical architecture. Instead, it utilizes the same platform as the ICE version, only with its 3.5-liter twin-turbo V-6 swapped out for a completely electric drivetrain. The new setup includes two motors that combine to churn out up to 483 horses when Boost mode is engaged, according to a press release. That’s significantly more oomph than the 375 hp generated by the gas-powered SUV (and the 365 hp produced by the zero-emission G80). Just like with the brand’s other EVs, all-wheel-drive comes standard, though the vehicle only utilizes the feature when needed. It can also sprint from zero to 62 mph in 4.5 seconds, which is pretty good for an SUV.

Inside the Electrified GV70  Genesis

One thing missing from the debut announcement is any info regarding the size of the Electrified GV70’s battery pack. Despite this, the brand claimed the Chinese version of the EV has a respectable range of 311 miles per charge, according country’s CLTC testing cycle. It will support 350-kW fast charging which will allow you to fill the battery from 10 to 80 percent in under 20 minutes. That’s about as fast of a recharge time as you’re going to find right now, but that will hopefully change in the years to come.

The Electrified GV70 may have made its debut at Auto Guangzhou and not the Los Angeles Auto Show, but it’s still due to be released stateside, according to the brand. Nothing is official yet, but Inside EVs reports it could go on sale here as soon as next year. That information, along with revised performance specs, will likely be revealed when Genesis announces an official release window. As for price, we would suspect it’ll start somewhat north of the ICE GV70’s $41,000 starting price.