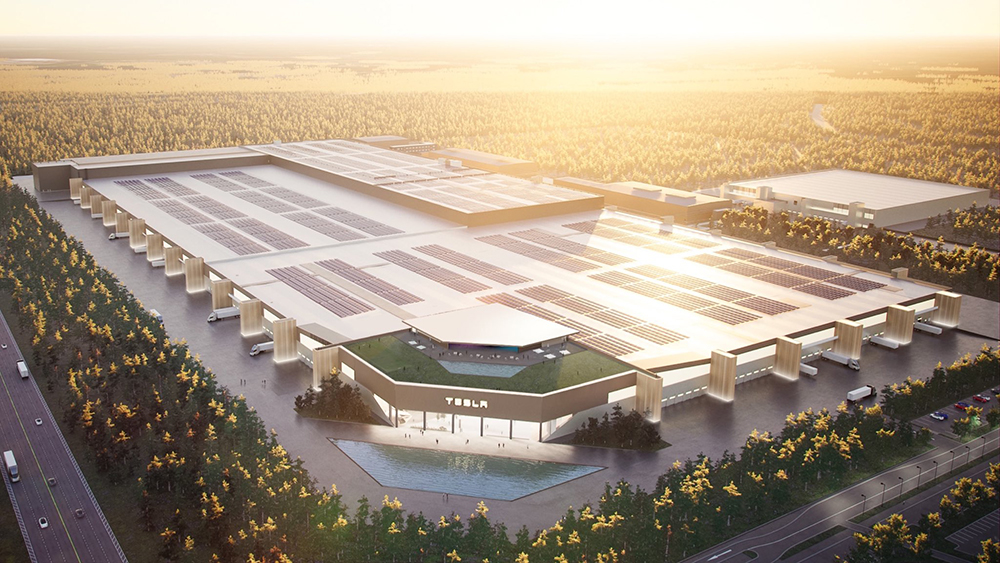 Early this morning, Elon Musk gave the Twittersphere a first look at the new Tesla Gigafactory in Berlin, and it’s a raving beauty in more ways than one.

The rendering shows “Giga Berlin,” which is currently under construction outside the German capital, is set to be a monolithic masterpiece that may include its very own rooftop rave space.

“Might be an indoor/outdoor rave space on the roof,” Musk wrote. This comes after the professional hype man himself held a poll back in March, asking whether the factory should have a “mega rave cave.” More than 90 percent of Twitter users voted yes, which may have been just enough to sway the EDM-loving CEO.

Beyond the touted rave cave, which we imagine will have Musk’s “Don’t Doubt ur Vibe” on repeat, the Gigafactory appears to have a rooftop terrace and pool, a large water feature out front and plenty of Tesla Semis waiting in the wings. It also has solar panels aplenty to power the plant. One observant user pointed out that the factory appeared to be missing chimneys, but Musk replied that they are just “carefully hidden.”

Tesla should have a mega rave cave under the Berlin Gigafatory

Musk first announced plans for the Berlin Gigafactory back in November 2019, but it’s been a rather bumpy road since then. After breaking ground in June, Tesla had a brief tussle with local environmentalists and regulators due to the demolition of existing forest land at the site. Then, a global pandemic happened. Finally, things look to be moving forward with construction recommencing at the plant.

Once complete, Giga Berlin will become Tesla’s first full vehicle factory in Europe. The automaker is planning to start production at the new plant in July 2021. This date coincides with the European launch of the Model Y, which will be the first EV to roll off the line.

That gives Musk just 12 months to complete the project and compile a playlist of dancefloor bangers for the rave cave. Godspeed, Elon.