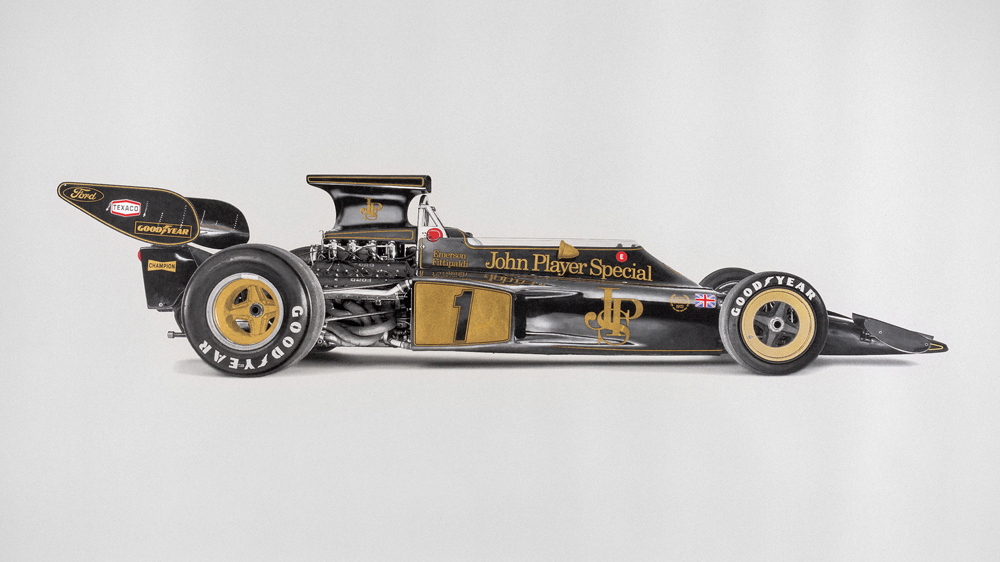 On May 1, 1972, at the Jarama circuit outside of Madrid, rookie driver Emerson Fittipaldi lined up on the starting grid for that year’s Formula 1 Spanish Grand Prix. At the end of 90 laps around the 2.1-mile track, the 25-year-old from Brazil had piloted his Lotus 72D to victory, while Jacky Ickx of Ferrari finished second. Fittipaldi went on to take the checkered flag in Belgium, Britain, Austria and Italy to claim the 1972 World Drivers’ Championship, the first to do so at such an early age. His storied career, which included another Formula 1 championship title, has placed him in the Motorsports Hall of Fame of America.

To commemorate the golden anniversary of Fittipaldi’s initial winning season, the Amalgam Collection, which manufactures detailed miniatures of the world’s most revered cars, is venturing down a different road for its latest offering of exclusive automobilia. The British scale-model builder has teamed with artist Alan Thornton on silk-screen prints of Fittipaldi’s 1972 Lotus 72D that will be limited to only 50 examples, each signed by the man who drove the black-and-gold machine into the history books.

A photographer and creative director, Thornton worked with Fittipaldi and Clive Chapman—the late Lotus founder Colin Chapman’s son—to do a studio shoot of the classic race car using a large-format camera. The selected images were made into silk-screen prints on ultra-premium uncoated paper stock then accented with hand-applied 23.75-carat gold leaf. It’s an embellishment found on the car itself. The end result is a 3-foot x 4.5-foot tribute to a Lotus masterwork.

“Alan’s obsession with form, function and beauty, combined with his deep passion for all things automotive and mechanical, align perfectly with Amalgam’s mission,” stated Sandy Copeman, founder and CEO of Amalgam, in the official announcement of the partnership. The news release also quoted Fittipaldi as saying, “I got up close and personal with these beautiful pieces of art when I sat with Alan to sign each one,” then he went on to call the finished product “gorgeous.”

Along with the 50 prints of the car’s profile (opening image), each priced at $4,163, the Amalgam Collection also has a similar treatment capturing the front perspective of the vehicle. Limited to 200 examples, each one of those sells for $1,048 and is signed by Thornton alone. A third piece from his series for Amalgam is a portrait of the three-liter straight-six engine inside a Maserati 300S, which is offered at the same number of prints and price as the latter.

This print of the front perspective of the Lotus is not as large as the profile version and is limited to 200 examples.  Amalgam Collection

As long as automobiles remain Thornton’s muse, and Formula 1’s popularity continues to reach unprecedented levels, this fine-art collection is sure to expand. Factor in the ever-growing line of meticulously built models, and it seems Amalgam may be in for more than a few winning seasons of its own.