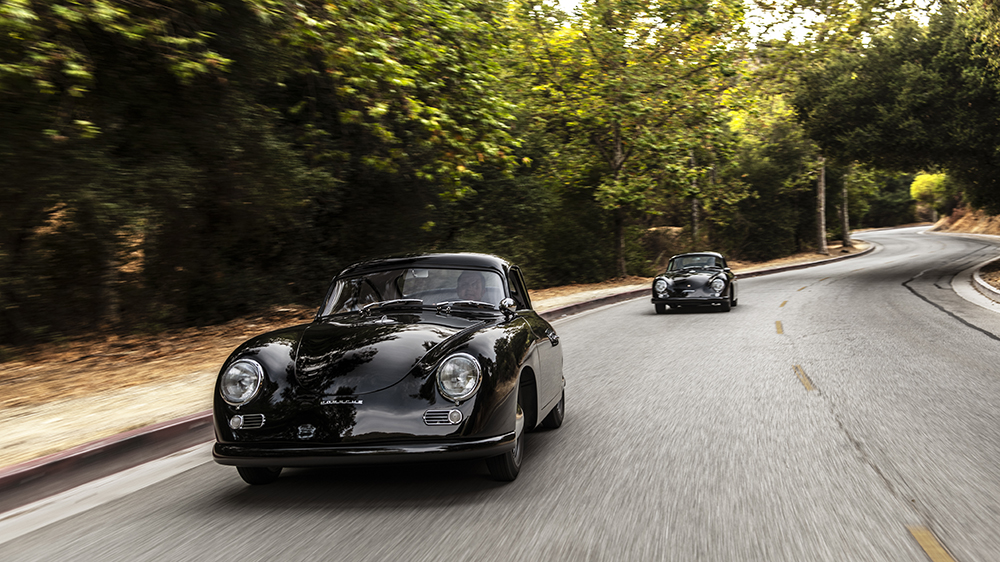 Emory Motorsports has earned renown for its lovingly restored classic Porsches, and one big reason is its work with the 356 Outlaw. Now, the custom shop has revisited one of the Outlaw’s most popular builds, the 1954 “His,” and given it a partner.

Emory recently unveiled the blacked-out Porsche’s better half, the 1958 “Hers” 356 Outlaw, on its Facebook page. Although the bespoke coupé looks identical to its predecessor at a glance, a closer inspections reveal a number of subtle touches that let it stand on its own.

Like the “His,” the “Hers” edition has been finished in a coat of sumptuous gloss black that is broken up by small dashes of chrome around the headlights, windows and on the door handle. Other modifications include a custom tank and rear diffuser. The interior offers an elegant contrast to the exterior. Gorgeous Toffee leather upholstery covers the speedster-style seats, dashboard and door panels, and there’s a wood-rimmed, three-spoke steering wheel and wooden gear shifter.

Although the “His” and “Hers” feature different chrome hubcaps and taillights, its inside the cabin that you’ll find the biggest differences. The older 356 Outlaw has a black leather and houndstooth upholstery, charcoal square-weave carpet and black details on its steering wheel and gear shifter. But both versions have been equipped with a modern-day A/C system so that they can be comfortably driven during the hottest months of the year. And on days when air conditioning isn’t needed, both cars feature custom sunroofs.

Inside the “Hers” 356 Outlaw  Drew Phillips

Under the hood of the “Hers,” you’ll find the same Emory-Rothsport 2.4-liter Outlaw-4 engine that’s in the “His.” We don’t have performance specs for the powertrain, but the motor, which was sourced from a 911 and is mated to a 901 series transmission, is capable of producing 205 horsepower, suggesting it has some real pep. Other mechanical upgrades include a 901 series independent rear suspension, front and rear sway bars and custom rack-and-pinion steering.

The pair of “His and Hers” 356 Outlaws were commissioned by the husband and wife owners Gaudin Porshce in Las Vegas, according to the custom shop. No price tag was given for either car, but past projects have run into the mid-six figures.

Check out more photos of the “His and Hers” 356 Outlaws below:

Inside the “His” 356 Outlaw  Drew Phillips