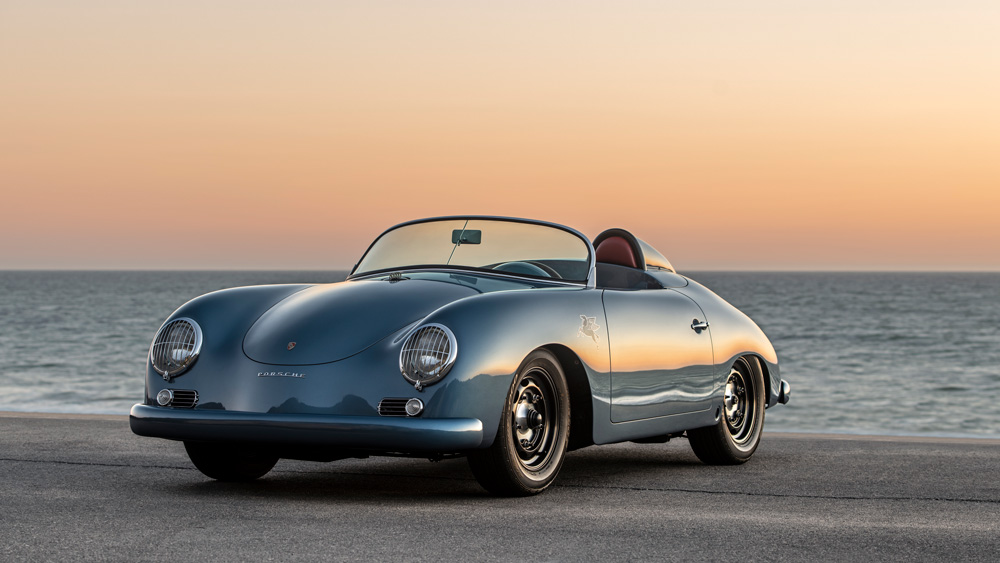 When life gives you lemons, so the modern proverbial saying goes, you make lemonade. Well, when life delivered Rod Emory the remnants of a vintage Porsche 356 coupe with a highly compromised roof, the custom builder turned it into a 1959 ½ “Transitional” Speedster.

Emory rose to fame during the mid-1990s when he began producing modified Porsche 356s, which automotive purists immediately labeled “outlaws.” He embraced the designation, and over the years he’s refined the “Outlaw 356” design rulebook, always adhering to one cardinal rule: every Emory Motorsports vehicle must preserve its Porsche DNA. On this particular example, that rule manifests itself in a number of ways, one of which is discreet. It doesn’t wear the ‘Speedster’ emblem. “This is a nod to the car’s coupe beginnings,” Emory says, “and to the idea that we are celebrating the best of what this car still had when we found it.”

To date, the custom auto builder has created four product lines, each created to deliver a distinct user experience. In the case of his latest creation, Emory has built an Outlaw that is a breath of fresh air. The project began with a client who wanted a California-style, convertible 356—as Emory describes it, “a sunshine cruiser.” But the project took off once Emory sourced a downtrodden 1959 356A Coupe with that aforementioned compromised roof, an affliction that provided Emory with the opportunity to play the role of Dr. Frankenstein, albeit healthily restrained. “It’s not a problem for us to change the identity of a car,” Emory explains, “because these cars that I’m working with are beaten and abused, and I’m bringing them back to life.”

Emory and his team hand-fabricated a number of new body panels and features for the car, including body-hugging bumpers, an unusual reverse-louvered deck lid, and a racing-inspired aluminum tonneau cover and headrest fairing that is mated to the integral headrest hoop and cage. The finished product cost $400,000, including the donor car, which accounted for slightly more than $50,000. Factored into that total cost was the extensive metalwork required to transform a late-generation 356 coupe into this unique Speedster. According to Emory, the prospect of creating a similar car but starting with a derelict vintage Speedster would cost at least $100,000 more, since the value of the donor car would likely exceed $200,000 by itself.

“The cars that I’m starting with are too bad to bring back to stock originals. That’s the bottom line,” Emory says. “This car is a 356 that has a new character and is now back on the road.”

The custom auto builder acknowledges that his vehicles gradually increase in value over time. As proof, he points to a 1959 Emory Outlaw Sunroof Coupe, which sold for $500,000 through a Bring a Trailer auction earlier this month. It’s a vehicle that Emory finished in 2013 for less than $350,000. “Because my cars have greater value in the end, it’s worth the effort to put the extra $200,000 into them,” he says. “In the end, it pencils out.”

As for his most recent work, Emory’s first transitional Speedster weighs only 1,850 pounds, it’s equipped with a proprietary Emory-Rothsport Outlaw-4 engine (co-developed with former Porsche GT racing crew chief Jeff Gamroth of Rothsport Racing) and it churns out 205 hp. Predictably, it outperforms original 356A coupes from its era. That said, Emory isn’t focused on his vehicles’ improved performance specs and he doesn’t want his clients or prospective clients being seduced by those numbers, which is why he’s never taken the time to measure his cars’ capabilities. “Anybody that’s into cars can do the math in their head and say, ‘Shit, this thing can get up and boogie,’” he acknowledges. “But that’s not important for us. I don’t want people to get caught up in that. I don’t want them thinking about numbers, I want them to be thinking about how it feels, how it handles—it’s about the driving experience and the adventure.”