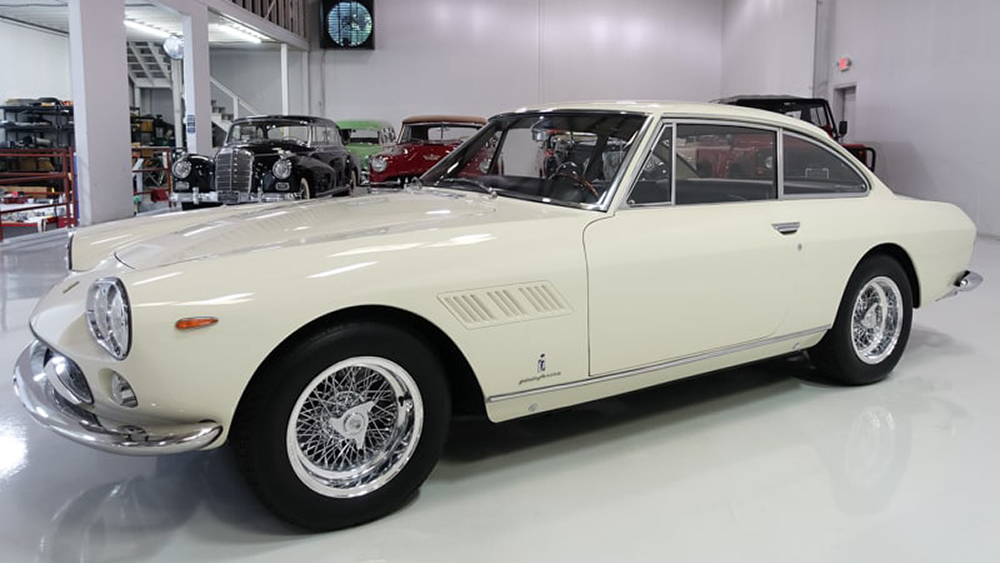 For fans of Enzo Ferrari and his remarkable automobiles, this 330 GT may be the ultimate collector’s vehicle: It served as Ferrari’s personal car for two years. And for $495,900, the pristinely restored 2+2 coupe with an incredible pedigree can be yours.

Missouri classic dealership Daniel Schmitt & Co. came into possession of the vintage Prancing Horse last year. The car is technically a prototype—one of four known to be produced—as the 330 America first emerged off the factory line a year later, in 1963, while the 330 GT 2+2 arrived in 1964. All 330s were powered by the prodigious 4.0-liter Colombo V-12 mill, good for 300 horsepower. Ironing out the history of this particular ivory-colored, quad-headlamped 330 GT wasn’t easy—Ferrari is more likely to tell you facts you’ve got wrong than what you got right—but with persistence, Michael Dyer, Schmitt’s research director, was able to find this very car in a few spots, including in a Pininfarina press photo, and in brochures for the 330. “It’s even on the cover of the 330 owner’s manual,” Dyer tells Robb Report.

“Enzo drove a lot of cars, not just this, but the factory did keep this for two years and it driven as his personal car for some time,” Dyer says, citing Ferrari: A Complete Guide to All Models by Leonardo Acerbi. “Enzo was known to drive this between his house and the factory, and that’s pretty cool, because typically Enzo wasn’t known to drive many Ferraris. He had a Mini Cooper, some Alfa Romeos, and some older stuff, but he did seem to enjoy the 330.”

This 330 GT, which came to the first Ferrari dealership in America in 1964, was found in a shipping container some time ago by a client of a Texas Ferrari restorer. “The client brings it to the restorer who notices the chassis number (4085) is very low, and he started doing some research,” Dyer explains. “He realizes this is one of the original prototypes, so he reached out to Piero Ferrari (Enzo’s son), and Piero remembered his father driving the white car around, when he was about 19 years old.”

Of his small amount of time spent behind the wheel, Dyer laughs, “it’s a V-12 Ferrari; it’s a ton of fun. It’s not your typical ‘supercar.’ It lives up to the grand tourer name, with its luxurious interior. It drives very well, which isn’t surprising since it was designed to be driven at speed. It’s a car you want to do 100 mph while weaving through the Alps. Ferrari wisely enough engineered all the suspension and chassis to come alive above 70 mph.”

As for the $495,900 asking price, Dyer notes it’s above “super high retail for a 330 GT,” but points to the provenance of the car to justify the half-million cost. “We’re respectful of the market, but we have to factor in the history of the vehicle,” he says. Indeed, whoever purchases this piece of automotive history will likely find it’s worth every penny to tell lucky passengers that Enzo himself once drove this.