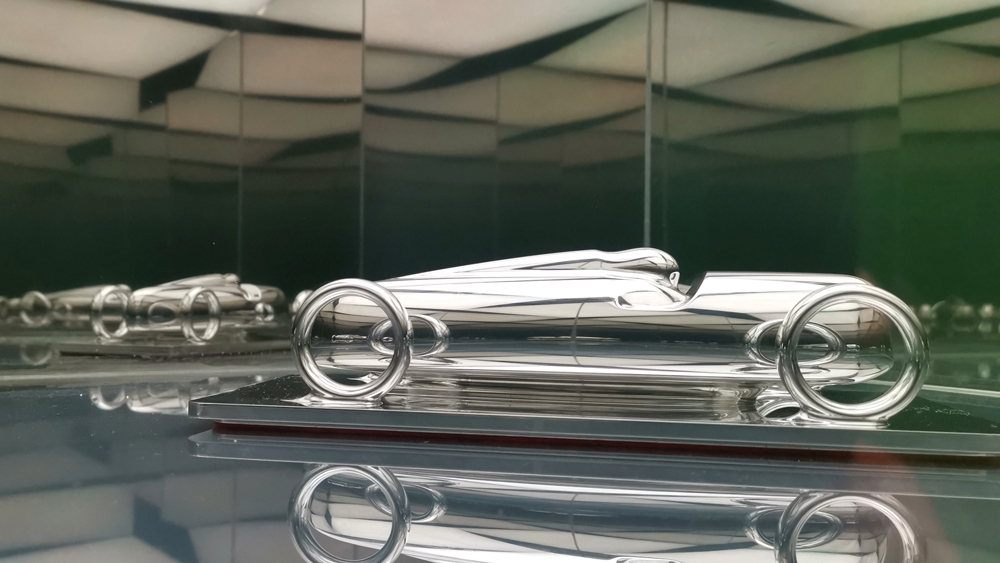 Every great artist has a muse—Monet had Camille Doncieux, Picasso’s was Fernande Olivier. For Michael Etrick, well, cars are what keep his creative drive strong. The automobile has long inspired artistic expression from Etrick, an automotive design sculptor formerly employed by Audi, whether his medium is clay, foam and polyester resin or any other material of the trade. But what is perhaps his crowning achievement to date has no industry application.

Etrick’s masterwork, 12 years in the making, gives shape to not only his talent but Audi’s legacy in general. Recently unveiled at The CarLab, an automotive consulting firm in Orange, Calif., the first in his aptly named Reflects series is a highly polished, billet-aluminum sculpture that pays homage to the German marque’s roots and a race car that provided an early benchmark for the brand.

The 302-pound piece is inspired by the 1936 Auto Union Type C racer, a car developed in collaboration with Ferdinand Porsche, who created a V-16 engine for Auto Union. The latter was a collective that included automakers Audi, Horch, DKW and Wanderer. It formed in 1932, and the timing proved impeccable.

“The year 1933 was big for racing, especially in Germany,” says Alexander Sadowski, consulting manager at The CarLab, who adds that new regulations set the maximum weight for race cars at 750 kilograms (1,653.47 pounds). “That helped spur what Auto Union was so famously known for—the A, B, C and, later, D series cars, which, in many ways, were a huge stepping stone for Porsche at the time,” says Sadowski.

The first year the Type C was campaigned in motorsport, it won three Grand Prix races and was the vehicle responsible for Bernd Rosemeyer eventually capturing the European Driver’s Championship. It’s a history that resonated with Etrick, who grew up watching his dad build and race hot rods in Long Beach, Calif. Using his own eye for aerodynamic surfaces, Etrick presents a stylized interpretation of the Type C, seemingly cast from a droplet of mercury, that simultaneously conveys both gravitas and an ethereal aesthetic.

Working from sketches and CAD renderings done by CAD designer Raul Cenan, Etrick then went about the process of milling the 6061 billet aluminum, coming up with seven parts to the singular presentation—the four wheels (set apart from the central structure), the body, the grille and the platform it all rests on. Under each wheel, which fits into the base like an exquisitely machined puzzle piece, is the branding of one of the bygone Auto Union automakers.

In the official announcement of the sculpture’s premiere, Eric Noble, professor of Vehicle Technology at ArtCenter College of Design, and founder of The CarLab, stated: “Michael is a true artisan and known master of vehicle form. We’re proud our studio was chosen to exhibit his very first solo work.”

Accepting custom commissions down the road, Etrick has priced his initial Auto Union Tribute at $60,000 and plans to produce nine examples, each measuring 3.9 feet x 1.9 feet x .7 feet. A version sized at 11.81 inches x 5.31 inches—perfect for a desk or table—will be limited to 99 examples priced at $3,900 each.

Yet it’s hard to put quantitative value on a life’s work. Says Etrick, “From where I grew up and where I’m at, a clay modeler contracting for 34 years, this is a thesis for my time in the automotive industry.”