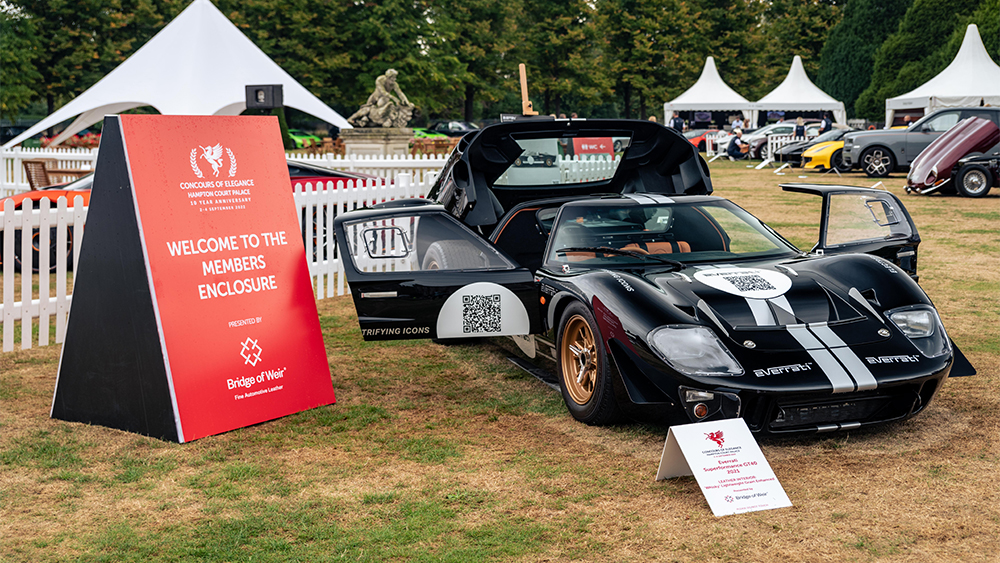 Everatti electrifies icons like classic Porsche 911s and Land Rover Series trucks with the reverence some firms reserve for 100-point ground-up restorations. This time around they’ve swung hard at one of the most beloved internal combustion totems of all time: the Ford GT40.

Based on Carroll Shelby’s racers which famously finished 1-2-3 at the 24 Hours of Le Mans in 1966, the swoopy gas-powered road cars are the apex predators of the old-school muscle car world. A new partnership takes a rolling chassis from California-based Superformance and implants Everatti’s latest battery-powered hardware to make the curvy sheet metal go like (proverbial) hell. At least on paper, the electric GT40 slays: powered by two motors that produce 800 horsepower, the low-slung two-seater weighs less than its V-8-powered counterpart and distributes its weight more evenly over the axles than the ’66 GT40 MKII A model which competed at Le Mans, delivering more predictable handling.

The 700-volt architecture packs advanced liquid-cooling tech, and the 62 kWh lithium-ion battery can be quick-charged from 20 percent to 80 percent in 45 minutes, with an estimated range of 125 miles. Current top speed estimates are around 160 mph, though the final figure might come in quite a bit higher.

Everatti founder and CEO Justin Lunny tells Robb Report that the GT40’s historical roots with the British firm Lola have significance for his UK-based company. But more personally, he says the GT40 holds special meaning to him because his eight-year-old son’s favorite movie is Ford v Ferrari. “He and I watch it all the time,” he says, pointing out that “the cars in the movie were all provided by Superformance, so there’s a lot of personal connectivity there.”

The GT40 EV was presented by Bridge of Weir at the Concours of Elegance at Hampton Court, and spectators appeared to be drawn to its impossible-yet-familiar shape and its unlikely powertrain. Standing out amidst a sea of high-quality classics is no small feat, but the battery-powered GT40 holds its own with its unmistakable silhouette and unexpected drivetrain. Everatti’s latest seeks to satisfy on a visceral level with its novel system that synchronizes twin active sound generators with a manual transmission simulator to create momentary pauses in power delivery to simulate gear shifts, in conjunction with sound generators that produce up to 110 decibels of V-8-like “exhaust sound.”

As much as the EV-powered GT40 stirred interest at Hampton Court, it irked commenters on Superformance’s Instagram account. Screaming bloody murder at the V-8-less car, the diehard peanut gallery opined everything from “Way to ruin it” to “Caroll Shelby would not approve,” and “…have you noticed how @rolex has never made a digital watch? This is killing your brand with the people who matter…”

At the end of the day, the fact that petrolheads are horrified at their beloved icon ditching a venerable gasoline-powered drivetrain for a battery and two motors is entirely comprehensible. After all, the GT40 is a slice of Anglo-American history whose character is centered on eight pulsing cylinders.

On the other hand, the times they are-a-changin’, as witnessed by California’s edict to ban internal combustion sales by 2035, not to mention similar moves being made by governmental agencies around the globe. Also, gas-burning, fume-producing GT40 tribute cars are still available from Superformance, complete with Shelby-registered certificates verifying their authenticity to the OG vehicles. Bottom line? This is a curious moment in history when the overlap of old and new is fraught with tension. While the idea of augmenting a battery electric drivetrain with an artificial V-8 makes the whole endeavor seem a bit ersatz, one thing is for certain: An electrified future is coming to gearheads sooner than they think.