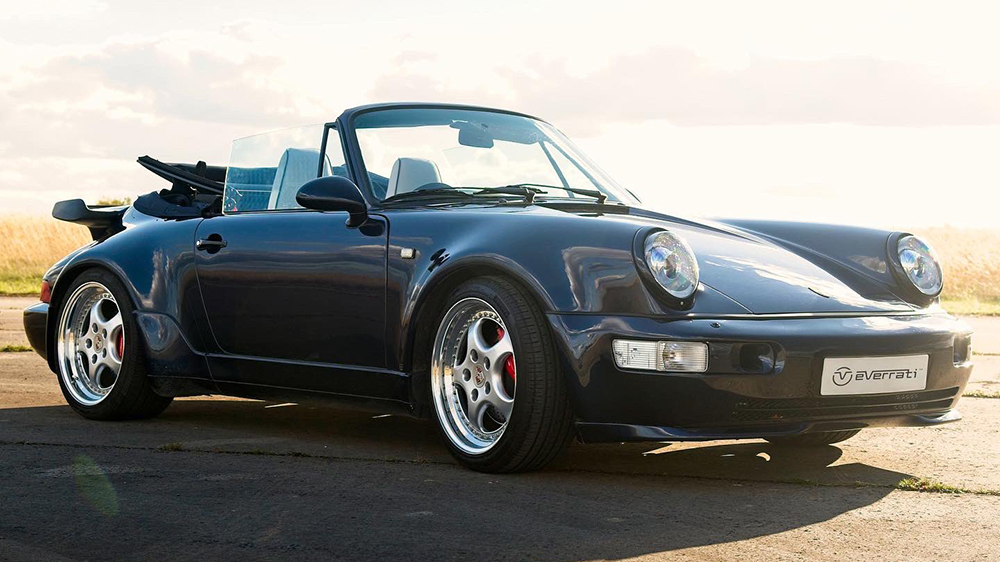 Everrati wants to take some of the guilt out of driving a classic Porsche drop-top.

The UK-based shop’s latest electric conversion is based on a 964-generation 911 Widebody Cabriolet. Now, you can have some fun in the sun without worrying about all the harmful emissions your sports car’s gas-guzzling engine is pumping out.

Like Everrati’s other Porsches—the 911 coupé and targa—the battery-powered Cabriolet is almost impossible to tell from one with an internal combustion engine. The vehicle looks stock inside and out, which is a good thing since the 964 Cabriolet is one of the most beautiful convertibles of the last 35 years. As the model name makes clear, it’s also wider than a traditional 964-generation 911. The only real changes are inside the cabin, which has been equipped with a modified gauge cluster with a power output indicator and what looks like a new digital stereo deck.

The biggest modification, naturally, is in the engine bay. The 964’s naturally aspirated, 3.6-liter flat-six has been swapped out for a battery-powered powertrain. You’ll be able to choose between an electric motor that generates either 440 or 500 horses, with the more powerful version also delivering 369 ft lbs of twist, according to Motor1.com. Regardless of which motor you opt for, it’ll offer significantly more power than the 250 hp and 229 ft lbs of torque produced by the standard Cabriolet’s air-cooled mill.

Thanks to its powertrain, Everatti’s Cabriolet will be able to zip from zero-to-60 mph in just four seconds. No top speed has been reported, but we imagine it will be respectable. The setup’s 62-kWh battery will also allow you to travel up to 200 miles between charges, which is solid for an electric conversion. All the electric modifications are fully reversible, too, should you ever decide to go back to an internal combustion engine.

Everatti’s headquarters are in Oxfordshire, England, where it builds all its conversions—including Land Rover Series IIAs and Ford GT40s—designed for customers in the UK and Europe. Aria Group in Irvine, Calif., will handle the construction of those meant for US buyers. No pricing has been announced, but it likely won’t be all that far off from the £250,000 (around $280,000) the shop charges for its electrified 911 coupé.