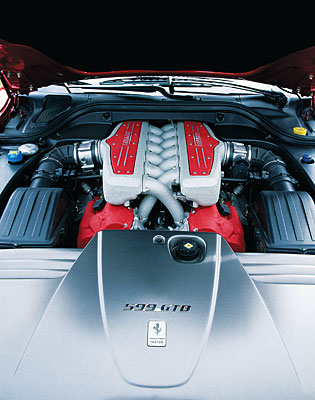 Contrary to the recent, rampant speculation circulating in Internet chat rooms, Leonardo da Vinci did not sketch the Ferrari 599 GTB Fiorano. Credit for the shape instead goes to Frank Stephenson—Ferrari’s former head of design—in collaboration with the company’s longtime design partner, Pininfarina.

But this does not mean that the late, great Italian artist and part-time symbologist would have named the car any differently; the Ferrari 599 GTB Fiorano reveals several secrets about itself before you ever turn the key. The number in the name represents the V-12’s displacement in cubic centimeters (divided by 10, and modestly rounded down); GTB is shorthand for gran turismo berlinetta, or grand touring coupe; and Fiorano references the figure-eight asphalt track where Michael Schumacher fine-tunes his Formula One cars and Ferrari’s chief hot-shoe, Dario Benuzzi, pushes the company’s production cars to their limits. Located within two right-hand-paddle flaps of the Maranello factory, Fiorano is a squiggle of pavement in the Modenese countryside that attracts more telephoto lenses than Sophia Loren ever did, as spy-photographer paparazzi swarm the gates like so many gnats. This is the promised land of the Prancing Horse.

On a spring morning, a dozen or so journalists set out from Fiorano, the track, in Fioranos, the cars, taking turns behind the wheels of a half-Dozen new 599 GTBs. We follow the A15 in Parma, exit at Fornovo, and head south to Berceto along the SS 62, one of Italy’s more pleasurable hills to climb in an automobile. This is the same Parma–Poggio di Berceto road course that Enzo Ferrari raced in 1919 (finishing fifth), and 87 years later, the scenery is likely very similar to what it was in Enzo’s youth: rural and open. Regardless of its historical relevance, this less-traveled road is worth taking, as it snakes through the hills like a strand of spaghetti.

The route eventually leads us back to Fiorano, where, that afternoon, the silence of the picturesque countryside is broken only by the occasional wail of a V-12 as it flies past pit row. We each wait our turn for warm-Up laps with Benuzzi at the wheel, except for the wannabe stunt driver from Car and Driver. Earlier in the day he stuffed his car while attempting to get the tail end out for some unrealistically dramatic action photography—unrealistic because the 599 GTB will not do anything untoward unless the driver makes a critical error in judgment, or completely disables traction control by selecting CMT mode (which we were specifically asked not to do).

At long last, my turn arrives. With one hand on the wheel, Benuzzi cracks off gear changes as though he is pulling the trigger on a Beretta, blasting his way up through the ratios while providing a guided tour of the Fiorano on the Fiorano. “Sport mode, eh?” he says, careening the car effortlessly through the first turn and then navigating the tight right-hander that follows the front straight. After executing a near-perfect lap, he says, “Now race mode,” and turns the steering wheel’s manettino control switch clockwise one click. I can feel the suspension tighten along with my left hand’s grip on the stitched-leather grab handle that runs along the central tunnel. For lack of a solid handgrip on the door, I tuck my right hand beneath my right knee. Any body roll other than my own is undetectable as we move sideways through curve and corner. Soon, the wide Pirelli tires are barely audible above the freewheeling fury of the musical V-12 operetta playing through the four-barreled exhaust.

Following a few dizzying laps with Benuzzi, I take some comparatively sane laps at the wheel before sitting down with Luca Cordero di Montezemolo, Ferrari’s charismatic chief executive officer, who speaks of the car in terms of its position, not in the marketplace, but in Ferrari history. “This car has better perfor­mance than the F40,” he says, referring to the marque’s watershed supercar, which debuted some 18 years ago under the company’s only other CEO, Enzo Ferrari, the founder. Since then, the special project line at the factory has created the F50 and Enzo Ferrari, the car. “The F40 was extremely difficult to drive in some conditions,” Montezemolo concedes, thereby distinguishing it from the heroically easy-to-drive 599 GTB. “With the 599 we answered a huge challenge in terms of technology, in terms of emotional driving, and also in terms of putting together a car that you can drive not only on the track but on weekends, on the roads, on the autostrada, everywhere.”

On the autostrada, the 599 uses Formula One technology to outshine cars twice its price; it is easy to drive fast, yet offers a ride that is superior to those of the Mercedes-Benz SLR, the Porsche Carrera GT, and even the Bugatti Veyron. Speed is an essential component of the 599 GTB’s drivability, although not necessarily the type of speed measured in lap times and zero-to-60 figures. The Fiorano’s new F1 SuperFast automated manual transmission completes a shift in 100 milliseconds, or about the same duration of a blink of an eye. Intervals of less than one-tenth of a second are beyond human perception, which explains why the 599 GTB’s gear changes seem so smooth; downshifts and upshifts are completed before the driver notices a corresponding rise or fall in engine rpm.

The mechanism’s name is not hyperbolic: SuperFast shifts perform a long chain of events—including clutch disengagement, gear selection, reengagement, and power delivery—at superfast speeds. The F/1 paddle system’s efficiency helps explain why, according to Ferrari, only 10 percent of 599 GTB buyers will choose the manual model.

The unobtrusive nature of the 599 GTB’s transmission contrasts with the car’s aggressive appearance and performance. Every component, aside from the windshield, is new, from the lightweight aluminum chassis and bodywork to the V-12 engine. Ferrari adapted the motor from the Enzo and not from the 599 GTB’s berlinetta predecessor, the 575M Maranello. Although it essentially is the same 65-degree design from the Enzo, the 599 GTB’s front-mid-mounted engine is built to endure everyday use. The 6-liter unit develops 102 hp per liter, for a total of 612 hp at 7,600 rpm. The rev limit of 8,400 rpm is high for a V-12 production car, and if you maintain the engine speed anywhere near 5,600 rpm, where 448 ft lbs of torque reach their peak, it responds enthusiastically. The 599 GTB reaches 62 mph from rest in 3.7 seconds (124 mph in 11 seconds) and has a top speed of 205 mph.

European 599 GTBs, such as the ones we are testing, have a “launch mode” fun button that will not be included on American models. (The DOT frowns on smoky burnouts.) But even without such electronic aids, the 599 GTB leaps at the pavement like a kitten to a ball of yarn on 19-inch front and 20-inch rear wheels and tires (the 20-inch fronts are optional). The car’s 3,722-pound weight is actually 220 pounds lighter than the 575M Maranello’s, although the new car is nearly 10 inches longer.

All of these figures, taken as a whole, make the 599 GTB the highest-performing road car in Ferrari’s history. “But performance is not only acceleration or maximum speed,” Montezemolo notes in a not-so-subtle dig at the Bugatti Veyron, which offers top-speed numbers greater than those of the approximately $260,000 Fiorano, but does so at a substantially higher price. “It’s also a combination of handling, braking distance, and the ability to drive the car in the rain.”

Montezemolo believes that the 599 GTB’s appearance reveals much about its performance. “When we started, I told my people there are priorities,” he says. “Number one, it’s a Ferrari. Don’t underestimate this number one; it means that if you see this car in the middle of New York or Rome or wherever—Helsinki—or even without the badge, this is obviously a Ferrari. Ferrari means good-looking, emotional driving, and when you enter the Ferrari, you are entering something unique. It means extreme performance.”

The form follows a Scaglietti-meets-wind-tunnel aesthetic, with no fewer than 11 air inlets and outlets that serve a functional purpose. The 599 GTB cuts through the air like a high-speed train, its flat underbelly and rear venturi conspiring to glue the car to the ground. The flying buttresses attached to the C-pillars add 110 pounds of downforce for high-speed stability, and the Fiorano’s overall shape generates a total of 419 pounds of downforce at 187 mph. Lift the throttle at such a speed, and the drag will make you feel as though you have dropped anchor.

The suspension utilizes Delphi dampers, which also can be found in such General Motors cars as the Chevrolet Corvette, the Cadillac STS, and the Buick Lucerne. The magnetorheological suspension control system allows the driver to adjust ride harshness through the manettino. The system employs variable-viscosity damper fluid, which is adjusted by the application of an electric field. Changes within individual dampers take place electronically in 10 milliseconds, so potholes or rub strips at the track’s edge are smoothed over and forgotten almost as soon as they are trod.

Much of the 599 GTB’s technology, including the SuperFast transmission, derives from Ferrari’s advanced research department: Formula One. Racing features can be seen everywhere from the steering wheel to the drilled carbon ceramic brakes. Interior options include a carbon-topped steering wheel—similar to that of the Enzo—with five yellow and red LEDs that synchronize with the tachometer to indicate shift points. Traction control (F1-Trac) is integrated to an instrument panel display that offers information based on the selected mode: Lap times appear for race mode, outside temperatures for snow mode.

“We are looking ahead all the time,” says Montezemolo. And from the front seat of the 599 GTB, ahead is the only direction that really matters. Buyers must also look ahead when considering a purchase; the waiting list for a 599 GTB is already two years, which Montezemolo concedes is too much. “Like a good-looking woman, you have to desire her. OK, desire, yes, but sooner or later, you also have to go out to dinner,” he jokes. “I don’t want to say more, but at least go out for dinner. This is our goal.“