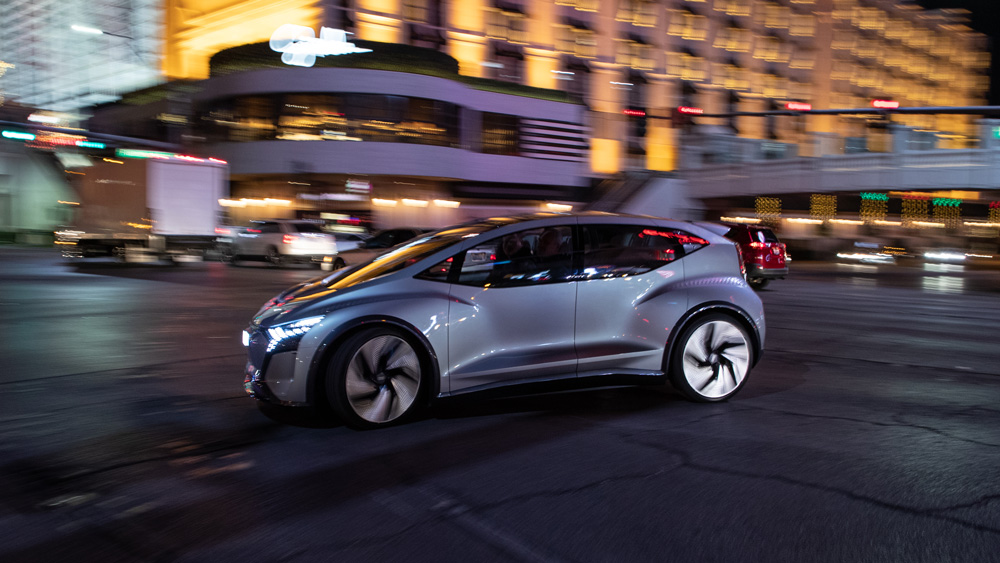 I’ve just ordered my lunch using only the movement of my eyes from what would usually be the driver’s seat of Audi’s autonomous AI:ME concept car, and it will be delivered to my destination just as I arrive. If this is the future of self-driving cars, count me in.

Audi first revealed this luxury urban concept at last year’s Shanghai auto show, and now Robb Report has been invited to take a world-first ride in the AI:ME— pronounced “Amy”—and test the tech in its cabin at the CES show in Las Vegas.

I chose my lunch from a pictorial menu on the 55-inch OLED display which runs around the base of the windshield, each item enlarging as I glanced at it. Audi envisages that food delivery services could be sent both your order and your ETA, and time their arrival to match yours.

With lunch planned, I donned a VR headset and took a helicopter ride around China’s spectacular Guilin province, a rather more scenic location than the deserted concrete Vegas parking lot the AI:ME was driving me around. Audi uses Holoride’s tech to match the image in the headsets to the movement of the car—turning the image left as the car does, for instance—to avoid making occupants nauseous.

But if this is the future, it’s still a long way off. Before drivers can use these features, we’ll need Level 4 autonomy, where the car still has a steering wheel but can drive itself in some circumstances without human intervention, and that’s still at least a decade away. And if autonomy does eventually free up some time as our cars drive us along roads they find easier to navigate, such as highways, we’re far more likely to reach for our own devices. Nothing the carmakers can provide to fill that time is likely to be as compelling as work or Netflix.

But they have to try, so view the AI:ME concept as Audi thinking aloud about what it might offer us to replace the experience of driving. And there are a bunch of other, more subtle features on this compact but beautifully proportioned and surfaced concept which we might see in cars we can actually buy rather sooner.

Outside, the front and rear lights extend along the sides of the car, creating a 360-degree “communication belt” along which Audi plans light signals that go way beyond the usual turn indicators, replacing the subtle waves and glances by which human drivers communicate.

Lunch was selected from a pictorial menu on the 55-inch OLED display.  Photo: Courtesy of Audi AG.

Inside, the steering wheel folds flat and telescopes away into the stylish walnut desk in front of the driver when not needed.  The other materials used inside have been inspired by high-end interior design: there’s no leather but instead there’s high-quality woven cloth, velvet, and even Corian, a composite material used for work surfaces in luxury kitchens. Plants fringe the huge OLED display and the panoramic roof, a visual clue to the AI:ME’s advanced air filtration system.

The AI:ME was developed as an example of Level 4 autonomy.  Photo: Courtesy of Audi AG.

The front seats are particularly interesting. They look great, with more than a hint of Eero Saarinen’s seminal Womb Chair about them. But they’re shaped that way for a reason. In a self-driving car, we’ll no longer need to be gripped by our seats and kept pointing forwards. Our cars will drive us smoothly, with adaptive suspension compensating for potholes, and we’ll have the freedom to turn and face our fellow occupants, so the seat bases are broader and the seat backs lower to make the cabin a more social space.

Riding in the AI:ME, I felt that, as a pure concept car, its dynamic performance isn’t particularly relevant. It goes, stops and steers smoothly enough, but the empty car park of the Aria isn’t much of a challenge to its self-driving software. And this priceless hand-built one-off is only intended to travel at low speeds, so its ride is firm and noisy.

But it’s a privilege just to get aboard this physical manifestation of Audi’s long-range thinking. Now, what’s for dinner?