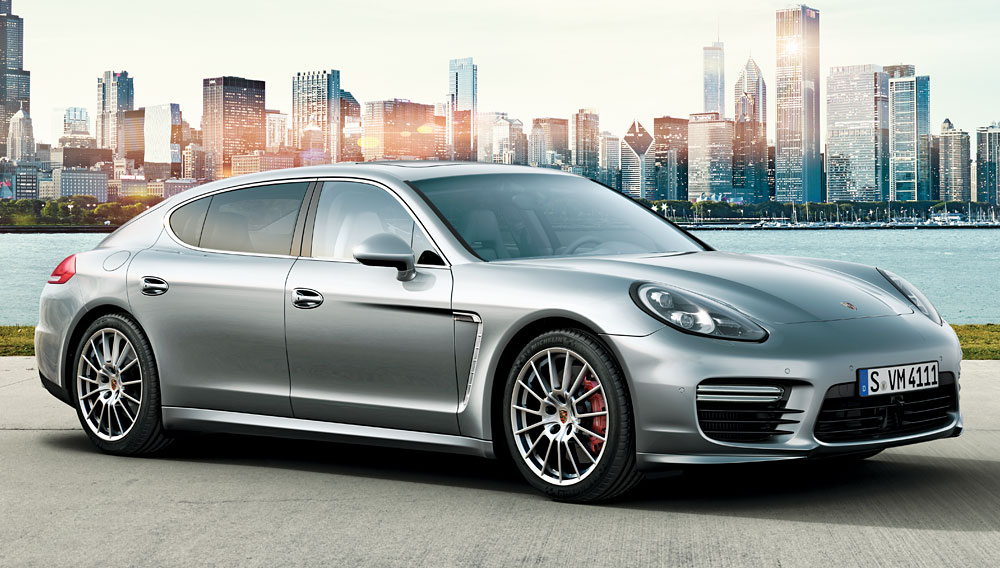 The folklore and religious figures depicted in the Lüftlmalerei, the murals that decorate the facades of houses throughout Bavaria, seemed to enviously scrutinize the Porsche Panamera Turbo Executive as it passed by them. Yes, the fisherman balancing on the gunwales of his rowboat while holding up a large trout for all to see appeared to have his eyes on the Porsche as it crept through one village at the speed limit (of about 25 mph). It was tempting to excite the Turbo Executive’s 4.8-liter 520 hp twin-turbo V-8, exercise manual control of the 7-speed dual-clutch automatic transmission, and disrupt the frescoed tranquility enough to send the fisherman into the drink.

Porsche’s revision of the Panamera sedan for the 2014 model year includes the addition of the $161,000 Turbo Executive and the $125,600 4S Executive, two taffy-pulled variants. Media members had the chance to drive both, plus the much improved $99,000 S E-Hybrid model that now features plug-in capability, earlier this summer in southern Bavaria, between the pyramidal peak of Zugspitze and the shimmering waters of Lake Kochel and then back north to Munich.

Stretched to nearly 17 feet long—about 6 inches longer than the standard-length Panamera—the Executives provide the “optimal experience for those customers who want [the] Porsche driving experience from the second row,” says the chief of the Panamera product line, Gernot Döllner. Just how many people want to experience Porsche driving from anywhere but behind the steering wheel remains to be seen, but it certainly is pleasant in the Turbo Executive’s rear compartment. The seats are electronically adjustable and heated and cooled, and the four-zone climate-control system allows each of the car’s occupants to choose a separate setting. Power-operated sunshades rise with a second upward tug on the window switch after the window is sealed, shielding passengers from prying eyes. With those features plus footwell lighting, reading spotlights, and adjustable overhead lamps, the rear is nearly habitable.

Although the Turbo Executive is long, wide (6.3 feet), and heavy (4,564 pounds), it still was fun to prod the car along Bavaria’s undulant byways and occasional twisty roads. The Turbo Executive appears no taller than a 911, and it seemed no larger when it was flinging through corners and barreling across the intensely green landscape of open fields and dense copses. The quick variable-rate steering became tauter during the turns, and the exhaust gabbled especially bountifully when the driving mode was set to Sport Plus. The Turbo Executive may be suitable for limo service, but it is still a driver’s car, willing and responsive, compliant and composed.

On fast stretches of autobahn during the drive to Munich from Schloss Elmau, the century-old hotel at the foot of the Wetterstein mountains that hosted the drivers, the 4S Executive serenaded travelers with the hum of its V-6. It is a remarkable car, and if the Turbo Executive did not exist, this one would satisfy.

Porsche now offers eight Panamera models in the United States. For the 2014 version, the company made a number of key changes to the car in addition to stretching it into the two Executive models. Foremost among the alterations was equipping the Panamera S, 4S, and 4S Executive with a new engine, a smooth-running twin-turbocharged 3-liter V-6 that produces 420 hp. (A 3.6-liter V-6 still powers the base Panamera and Panamera 4.) Compared with the naturally aspirated 4.8-liter V-8 that it replaces, the new V-6 is marginally more powerful and delivers a fuel economy as much as 18 percent better. The engine enables the 4S to bolt from zero to 60 mph in 4.6 seconds; top speed is 178 mph. The heavier 4S Executive has the same top speed and reaches 60 mph in 4.8 seconds. The Turbo Executive has a zero-to-60-mph time of 4 seconds and a top speed of 190 mph. The optional Sport Chrono package improves the sprint time of each model. Among the standard equipment for all 2014 Panameras is an engine stop-start feature, which saves fuel by automatically shutting down and then refiring the engine at intersections, in lines, or in heavy traffic.

Porsche has restyled the car’s front and rear, giving the swooping liftgate a longer fly line and flatter and wider glass. With their 121-inch-long wheelbase, the Executives look distinguished but retain the menacing sportiness that characterizes all Porsches.

For some drivers, the revamped S E-Hybrid may be the most impressive Panamera model. It has a more powerful electric motor compared to the previous version, and a rechargeable battery pack, with lithium-ion cells replacing nickel-metal hydride ones. The electric drive works in tandem with the new 3-liter V-6, but the engine’s forced induction comes from a supercharger instead of turbos. The engine system’s total output peaks at 416 hp, and in Sport mode the car can display a wicked side.

During a nearly 44-mile lap through the Bavarian countryside, traveling in electric mode, the S E-Hybrid’s 8-speed automatic transmission modulated all output. Instead of evoking a concrete saw, which is typical of single-ratio electric mobility, the car offered a refined experience, gliding along in near silence. It covered the first 17 miles or so exclusively on battery power. When the battery was depleted, the V-6 propelled the car and expedited the recharging through an E-Charge mode.

The route included the lakeside village of Kochel am See, home of the Franz Marc Museum. Born just up the road in Munich, Marc was a leader of the expressionist movement. “He painted pictures of horses in vivid colors to express his own spirituality,” says the art historian Lynne Pauls Baron. Marc volunteered to serve in World War I and at age 36 became one of the hundreds of thousands of casualties of the five-month-long Battle of Verdun when he was killed by artillery shrapnel.

The drive also passed through the village of Oberammergau, which is associated with another artist: Franz Seraph Zwinck, the most renowned painter of Lüftlmalerei. Indeed, the name of the craft apparently comes from his nickname. Zwinck lived in Oberammergau in the late 1700s in a house named Zum Lüftl, and so he became known as der Lüftlmaler, “the Lüftl painter.” Most of his paintings depict figures from Christian history, thus serving as billboards of a sort for the five-hour-long passion-play performances that the residents of Oberammergau famously stage every 10 years.

Villagers first performed the passion play, which recounts the final days of Jesus Christ’s life, in 1634, believing that the production would impress their god enough to spare them from the bubonic plague that had struck the region a year earlier. Now, once a decade, about half of the village’s 5,300 residents participate in the 100 or so performances that are staged from May through October. Together, the performances draw more than 500,000 visitors to Oberammergau from all over the world.

The passion play may not be responsible for keeping the village plague free, and it has been labeled anti-Semitic, but it has helped balance the municipal budget. The locals have an expression: “Die Passion zahlt,” which means, “The passion [play] will pay for it.” And indeed, the production’s proceeds (said to be $20 million from the last production) have paid for numerous civic improvements, including a community center and a community swimming pool.

The next performances are in 2020. The last production was in 2010, a year after the Panamera debuted. As Porsche’s sales and marketing chief, Bernhard Maier, recalled in Bavaria, the introduction of the original Panamera was greeted with “very intense discussion” in the press, which is to say that the media was skeptical, even critical. The car’s shape was compared to that of an unleavened loaf, and like the Cayenne SUV before it, the Panamera prompted questions about Porsche’s compromising the integrity of its brand, in this case by producing a sedan. The reception from customers has been warmer. Porsche produced the 100,000th Panamera in May, and last year it sold more than 27,000 of the cars worldwide, making the vehicle the company’s second-best-selling model in 2012, behind the Cayenne—and ahead of the 911. So like Oberammergau’s passion play, the Panamera may have its doubters and detractors, but over the years the car has proved so successful that its production is not only enduring, it is expanding.