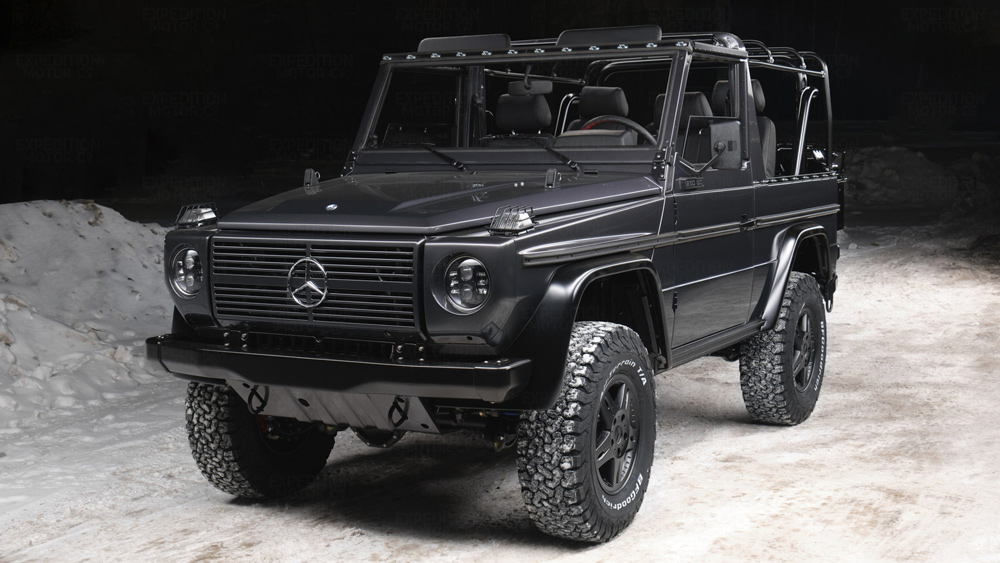 It seems that the popularity of the Mercedes-Benz G-Series has never been greater, with customers clamoring for the boxy brutes at dealer showrooms and paying well over MSRP to cut to the front of the waiting line. And there’s no question that the vehicle that started life as an unadorned military appliance has been gentrified beyond the wildest dreams of the original’s designers.

What has become a luxury appointed sheep-in-wolf’s clothing was, in its initial form, a Wolf . . . period. In fact, that’s what the German military codenamed their Geländewagen (terrain vehicle), which first rolled out of the Steyr factory in Graz, Austria, back in 1987. But not every G-Wagen of the era was a Wolf. To be called such, the vehicle had to have a fold-down windshield and a convertible soft top. And be a 250GD. That’s the sweet spot, according to Alex Levin, founder of Expedition Motor Company in Frenchtown, NJ.

In the spirit of the old Land Rover Defender, the original 250GD was a workhorse with nothing in the way of creature comforts, just plenty of authenticity and a certain grit that comes from time in the trenches. But unlike the old Defenders, the Mercedes-Benz 250GD never came to the US, that is until Expedition Motor Company decided to offer perfectly restored examples with enough modern touches to bridge the decades and appeal to customers whose other rides might as easily wear a Bentley or Lamborghini badge.

Expedition Motor Company begins by sourcing examples of the 250GD, produced between 1990 and 1993, a model with millions of miles of proven service throughout its years of production. In fact, its diesel 0M602 power plant is known as the “million-kilometer engine” because of its rock-solid durability.

The convertible SUV can be specified with an automatic transmission.  Photo: Courtesy of Expedition Motor Company.

The ensuing restoration is a comprehensive one. Each Wolf is the subject of more than 1,000 hours of labor in the course of the project. Every example is stripped to bare metal and painstakingly rebuilt to as-new condition, with customers choosing from a palette of retro and contemporary colors, hand-stitched interiors, options that include climate control by Vintage Air, assorted bumpers, trim, winches, etc. And for the first time, a Mercedes-Benz automatic transmission can be specified, which brings an entirely new level of convenience to the driving experience.

Pairing the high-ratio five-speed gearbox, the same fitted in Mercedes’ 2000-era S-Class sedans, to the hard-working diesel engine that powers the 250GD was a sophisticated engineering exercise, requiring a custom transmission control unit (TCU) in order to maintain perfectly smooth gear changes, quiet operation and reliability. A $7,500 option, it can be combined with another newly developed extra for the stout inline-five engine: turbocharging. Also priced at $7,500, the forced induction adds power and flexibility to the 2.5-liter diesel’s output.

Other revisions that come standard are new instruments and gauges, an all-new wiring harness, premium headlamps (previously optional equipment) and an upgraded entertainment system with new Bluetooth capabilities as well as USB and device plug-in considerations.

Options for an automatic transmission and turbocharging are also available.  Photo: Courtesy of Expedition Motor Company.

The Expedition Motor Company’s 250GD Wolf is legal in 49 states and, with automatic transmission and turbocharged engine, is priced around $125,000.