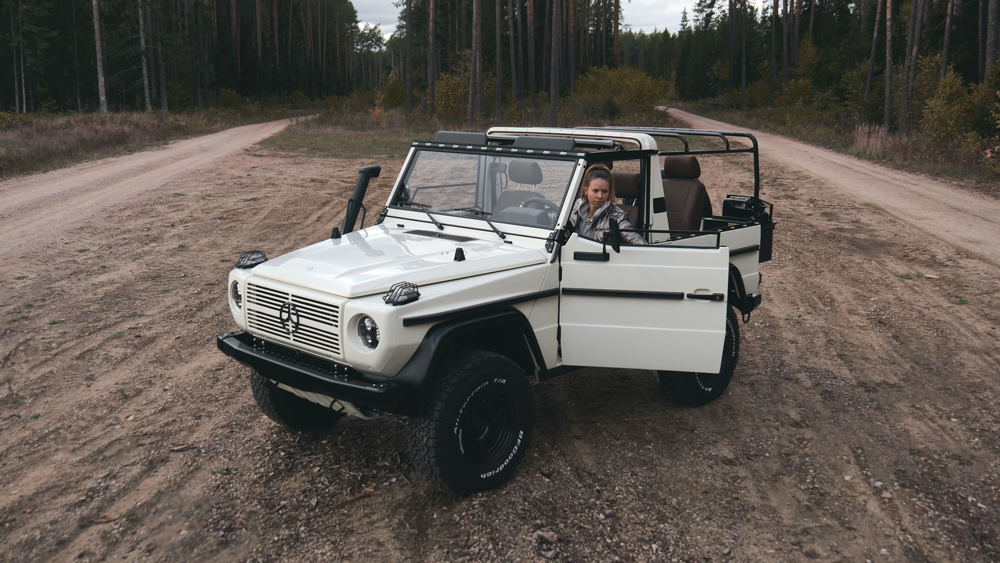 There is no denying that the Mercedes-Benz G-Class SUVs are some of the most accomplished tools in the explorer’s arsenal of off-road vehicles, the latest models able to engage in extreme unpaved behavior while providing luxurious transportation on roads. What started as a military project in the 1970s has evolved into the ultimate fashion accessory in affluent communities worldwide.

But while nothing says poser like a matte-white AMG G 63 SUV with a Swarovski-studded license plate frame, other drivers take the G-Wagen seriously, appreciating it for its vault-like build quality, bulldog tenacity and unpretentious, boxy shape. In America, the ubiquitous four-door hard top is a familiar sight, but few may know that its predecessor, the original 250GD, set the stage with a two-door convertible as basic as they come.

Alex Levin and his team use Mercedes-Benz 250GD Wolf examples made from 1990 through 1993.  Photo: Courtesy of Expedition Motor Company.

Expedition Motor Company founder Alex Levin has had a fascination with the original G-Wagen since he saw one in Europe years ago. What became a collecting hobby turned into a restoration business dedicated to just one model, the 250GD Wolf, using examples made between 1990 and 1993. The “GD” stands for Geländewagen (terrain vehicle) Diesel, and Wolf is the name given by the German military for versions of the short-wheelbase 250GD that feature a fold-down windshield and a soft top.

Power comes from Mercedes’ OM602, a 2.5-liter, straight-five diesel known as the “million-mile engine” for its Methuselah-like endurance. Parlor tricks, like shoehorning a 500 hp LS3 V-8 into the engine bay, may appeal in theory, but in reality, the diesel’s power and torque will take the 6,500-pound 250GD just about anywhere and, together with the four-speed manual transmission and all-wheel drive, make the SUV as indefatigable and easy-going as an ox.

Alex Levin and his team restore every 250GD Wolf from the chassis up, inspecting, refinishing or replacing all the parts, stripping and rebuilding engines, transmissions, front and rear differentials, suspension, steering, electrical systems and other components in their European facility staffed with 15 technicians dedicated to restoring this model only. Interiors, soft tops and show-grade paint application complete every build. In the US, the Expedition Motor Company’s take on the 250GD Wolf is legal in 49 states and starts at $102,150.