Realistic Lego recreations of some of the world’s most desirable cars are nothing new. What we haven’t seen nearly as much of, though, are fan-made miniatures that can duplicate those vehicle’s core features.

Enter Lego enthusiast Technic-AI’s GMC Hummer EV. The 2,200-piece model, which you can see on the toymaker’s Ideas website (via Inside EVs), is a fully functional version of the battery-powered truck. Not only can the pint-sized vehicle drive, but it can also replicate the electric bruiser’s exciting “Crab Walk” feature.

The first thing you’ll notice about Technic-AI’s Lego Hummer, though, is how much it looks like the real deal. The builder used a wide assortment of the company’s expert-level Technic bricks and pieces to faithfully capture the electric supertruck’s shape and personality. And as good as the model looks, it’s even more impressive when you see it in motion. 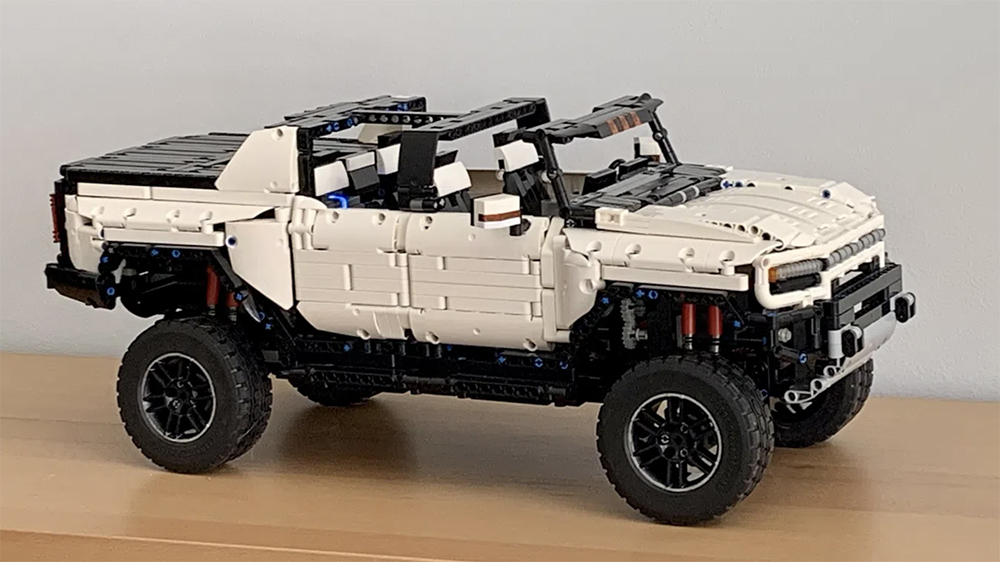 As part of the model listing, Technic-AI included a video of the Lego truck being driven around via remote control. In the clip, you can see the vehicle being driven back and forth and even having its suspension raised so it can drive over obstacles. Most impressive, though, is that because it’s powered by four motors, one on each wheel, the Lego model can “Crab Walk” like the real Hummer. The feature allows each wheel to be steered in the same direction at once, making it much more maneuverable than you would expect.

“At the minute I first saw the new Hummer EV video presentation, I immediately knew that it was to be my next Technic project,” Technic-AI wrote on the model’s Lego Ideas page. “Not only is it all-electric and loaded with technologies, but it has the power of any heavy-duty pick-up truck, excellent off-road capabilities, performance of a supercar and all this can be powered with clean renewable energy.”

Technic-AI’s Lego set is currently a one-of-one creation, but that could change. If the model accumulates 10,000 supporters through the Lego Ideas site between now and November of 2022, the toymaker will consider turning it into a real kit. If it does eventually go into production, expect it to go for a lot lower than the Hummer EV Edition 1’s $112,595 sticker price.